While the world of Warcraft is distinctly fantasy in its lore and aesthetic, there’s something quite comic book-like about it. From the cartoon style of its art to the larger-than-life heroes and villains, it’s not hard to taste notes of Marvel and DC between the Tolkien and Lovecraft flavours. That zesty twang is about to be boldened in Hearthstone’s first expansion of 2019: Rise of Shadows.

The shadows in question are a collective of villains who have previously starred in old Hearthstone expansions. There’s Dr. Boom of The Boomsday Project, Hagatha the Witch from The Witchwood, Kobolds and Catacombs’ King Togwaggle, and Madame Lazul, the fortune-telling troll from Whispers of the Old Gods.

These bad guys are brought together by Arch-Thief Rafaam, last seen as a part of The League of Explorers set, in order to form super-villain group The League of E.V.I.L. (there’s no Bad Horse, so it appears that Blizzard aren’t the huge Joss Whedon fans we assumed they were). The story of the League spans across all three of this year’s expansions, making it Hearthstone’s first true attempt at a narrative epic.

During Rise of Shadows, the traditional Hearthstone heroes are replaced with new characters from the League. Dr. Boom steps in as a Warrior, Madame Lazul as Priest, King Togwaggle as Rogue, Hagatha as Shaman, and Rafaam as the Warlock.

Each role will feature new Callback Cards which restore mechanics from the set that the relevant villain was originally part of. So, for example, you can expect to see the Forbidden Words card crop up in Madame Lazul’s deck as a callback to The Whispers of the Old Gods’ Forbidden Shaping. 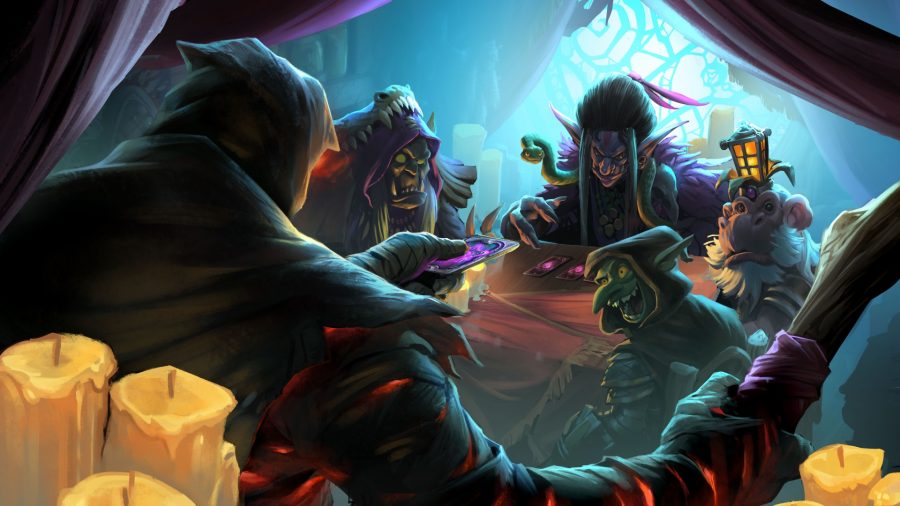 Other new mechanics include the staples of being a bad guy: lackeys and schemes. Lackeys are 1/1 minions, spawned by cards such as the new EVIL Miscreant, that make up for their pathetic strength with inventive Battlecries. The Ethereal Lackey, for instance, can discover a spell, while the Faceless Lackey summons in a random two-cost minion.

Rise of Shadows will start a story that Blizzard plans to tell over all three of 2019’s expansions. Naturally this means there will be a Solo Adventure, which will arrive in May. The first chapter will be free, and subsequent ones can be unlocked for 700 gold or real cash. This format is akin to the Original Hearthstone Adventures, so it looks like cards aren’t the only thing with nostalgic callbacks.

Schemes are collectable cards that increase in power for each turn they are held in your hand. The appropriately named Hagatha’s Scheme, for example, deals one point of damage to all minions, but the longer the card is held on to, the more damage it can deal. Schemes will no doubt form the core of many new decks and tactics.

Of course, a league of bad guys packing nefarious schemes and armies of lackeys needs to be opposed, and that’s where the Defenders of Dalaran come in. A collection of heroic characters from their titular Alliance city, they fill in for the other four Hearthstone roles; Mage, Paladin, Hunter, and Druid. We’ve yet to be introduced to the Defenders cast, but the team’s name certainly suggests that the League of E.V.I.L have the city of Dalaran firmly within their sights… 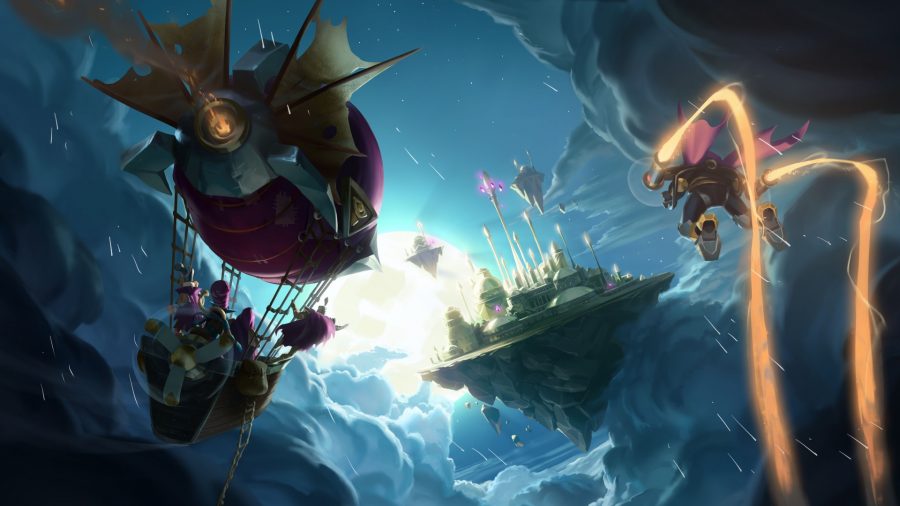 While they may not have access to Lackeys and Schemes, the good guys do have their own tricks to use in their fight against the League. The Defenders of Dalaran can use special Twin Spell cards, which allow for the double casting of their ability. For example, The Forest’s Aid is a Druid card that summons five 2/2 Treants, but after it has been played it adds a copy of itself to your hand, allowing for it to be cast once more later in the game.

All of these new characters and mechanics can be yours, just as soon as April 9 arrives and the curtain is fully pulled back on Rise of Shadows. As ever, the set will include 135 new cards across all of Hearthstone’s classes. Eager collectors can begin their new deck from April 5 with a pre-release phase, during which simply logging in will reward you with a free Legendary card.

There’s also a couple of big bundles for the most dedicated collectors which can be pre-purchased, so you can start tearing open packs on the big day. We’ve already amassed a large collection of condiment packets to get our fingers into shape.