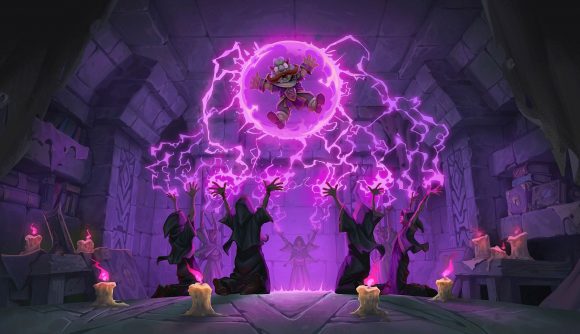 One of the best card games on PC is about to get bigger, again. The Scholomance Academy expansion for Hearthstone release date is August 6, Blizzard has announced. The Harry Potter-inspired expansion is adding 135 new cards to the game, with 40 of those being new dual class cards.

Between now and the launch, you’ll have a chance at another sneak peek at Scholomance Academy. Blizzard is holding a card reveal livestream July 29 at 18:00 BST / 13:00 EDT / 10:00 PDT, featuring YouTuber Kripp and Hearthstone developer Alec Dawson. You’ll be able to catch that live over on the official Hearthstone YouTube channel.

Ready your wands for #ScholomanceAcademy, launching worldwide on August 6 🎉

Perhaps the most exciting aspect of the Scholomance Academy is the concept of dual classing, giving Hearthstone’s various classes access to some of the same cards. Blizzard tells us it was inspired by the US university system and the idea of ‘double majoring.’ That means warriors can now cast a few spells, for example.

If you’re brand new to Hearthstone, you might want to get prepared for the entrance exam by studying up on the best Hearthstone decks for beginners.