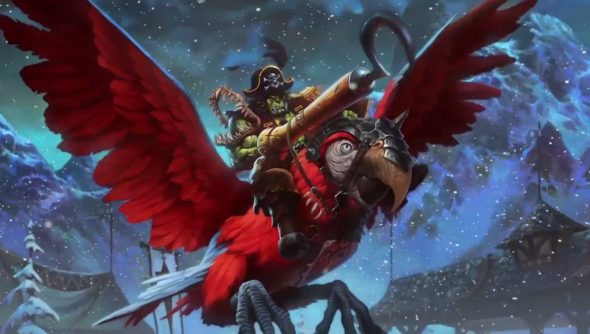 Update 23/07: The pricing for the new set will be as follows. After launch, packs will cost the same amount as they currently do for other sets, with a scaling structure giving you more packs for less cost each as you buy in bulk. However, the pre-order pricing will be slightly cheaper, with £34.99 getting you 50 Grand Tournament packs and a special card back, rather than the regular 40. As stated below, these pre-orders will go live some time next week. We’ll bring you all the new cards as they are revealed and you can see what’s already been spoiled in our roundup.

That special Hearthstone announcement that Blizzard has been teasing was just revealed this evening. As a lot of people guessed, the special announcement was indeed an expansion. It’s called the Grand Tournament, where heroes, weird and familiar, duke it out in Northrend.

Hearthstone’s playing with Warcraft history a little bit, having a laugh in the process. The Grand Tournament is Northrend’s Argent-run competition, which found the heroes that would go on to defeat the Lich King.

Hearthstone’s twist on the history is that, after the Lich King’s defeat, another tournament was planned, but along with the noble knights and famous warriors all manner of eccentrics and ne’er-do-wells showed up too. So expect to see familiar faces from the tournament ground, but also some unusual new characters, like the fellow in the header image.

The pirate chap is Skycap’n Kragg, whose Charrrrrge ability means that he costs 1 less mana for every friendly pirate on the board. He’s far from the most curious card, as there 130 of them, and one of them is an ethereal on a magical camel.

An appropriate, new board has been designed just for the Grand Tournament, complete with stripey tents and training areas, so you’ll have somewhere new to slam down your cards.

Nick’s going to be going into more detail in regards to the new cards soon, and if you’re just getting started, here’s his best Hearthstone decks for beginners guide.