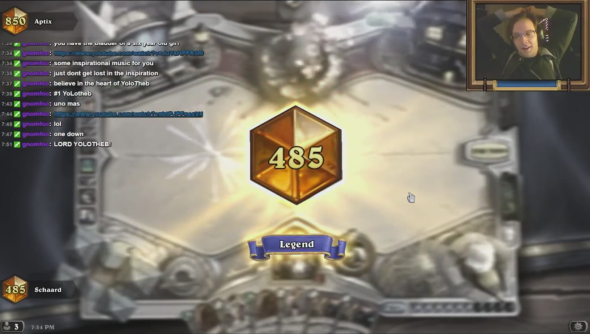 This a story about a Hearthstone player called Schaard, who desperately wanted to become a Hearthstone game designer for Blizzard. Lucky for him, Blizzard opened its doors for that very position, and Schaard – freshly graduated – ticked many of the requirements that were asked of potential recruits.

All but one: “Legendary status in Hearthstone or Top 8 in a pro tour in Magic: the Gathering.”

While the latter was pretty much out of the question, the former, wasn’t. So Schaard documented his quest for legend status in the medium of video, and we’ve got it below.

Commenting in the reddit thread dedicated to the video, Schaard reveals his origins. “I’ve gamed since I was very young.” explained Schaard. “My dad won an NES in a golf tournament when I was a kid, and I’ve always been captivated by the new possibilities that emerge in games. I had a real competitive streak in my teen years and early 20’s where I tried to go SUPER PRO in EVERYTHING, but when I got a little older I developed pain in my hands and arms that really put a ceiling on how fast I could twitch.”

But that didn’t stop Schaard from pursuing a role within the games industry. “In time, I traded my competitive edge for a contemplative one, and I went to school to study existential philosophy and phenomenology (aka the science of lived experience).” said Shaard. “Studying phenomenology gave me a really great opportunity to examine lived experience in a very close way, and out of habit I started examining those experiences which were closest to me: games. So, in short, what makes me want to be a game designer is so that I can design interesting experiences for people.” 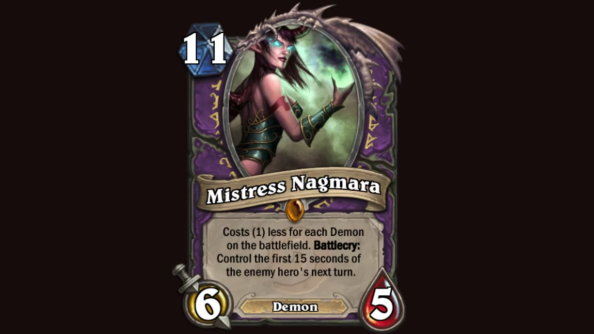 But if Schaard could get his dream job, he has many ideas for what the future of Hearthstone should entail. “In future Hearthstone development, I’d like to see them further differentiate themselves from non-digital card games.” Schaard stated. Though I know a lot of people complain about the RNG aspects of Goblins and Gnomes, I think it was a great design call because it does things that non-digital card games simply can’t do. And that’s very exciting to me.

“That’s part of the reason I made Nagmara: I remembered Mindslaver and the huge volumes of special rulings, italicized text, disclaimers, and errata that surrounded that card. With Hearthstone? All solved by digital magic, everything is quick and painless. Moreover, you could never use time like this in a non-digital game. What are you going to do, bust out a stopwatch and call a judge to oversee it? No way — but Hearthstone handles it (at least in theory) perfectly. I’d like to see Hearthstone exploit this digital magic for all it’s worth (and frankly, I think that’s a lot).”

Even though Schaard missed the boat this time, we wish him all the best in his future applications.

{"schema":{"page":{"content":{"headline":"Watch a man’s journey to Hearthstone legend in order to become a Blizzard game designer","type":"news","category":"hearthstone-heroes-of-warcraft"},"user":{"loginstatus":false},"game":{"publisher":"Blizzard Entertainment","genre":"Free to Play","title":"Hearthstone","genres":["Free to Play"]}}}}