Different powers mean that different card types or play styles should be your priority. When you’re playing, you’ll also have the ability to see who you’re up against next. Knowing the hero powers of your opponents might give you a hint of what you should have on the board, and in what order, so pay attention. If you want to learn the basics, our guide on how to play Hearthstone Battlegrounds will help you get to grips with the new mode.

The Hearthstone Battlegrounds heroes are: 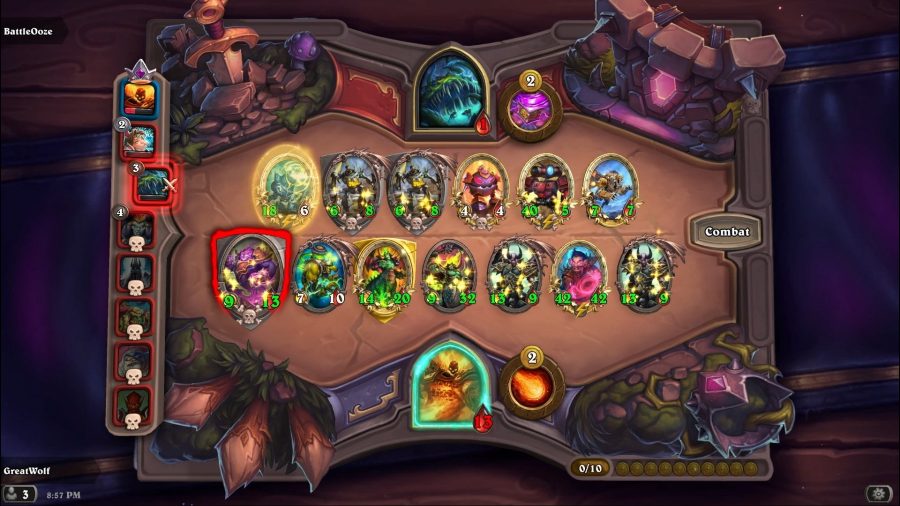 Some Hearthstone pros are already saying that if you see A.F. Kay in your line up, you should pick her. Although at first glance she is underpowered, in fact, you’re not likely to be that far behind when you enter the game. Note that you ‘discover’ these minions, so you get a choice of three when one is put down. It means this ability isn’t fully randomised. Although you miss the turns, you do get the same amount of gold your opponents have by the time you join in)

Hero Power: I’ll Take That!
Cost:  one coin
Ability: Next combat, add a plain copy of the first minion you kill to your hand

For one cost, this hero power could be deadly. Although you’re not always certain to get the card you’re after, you don’t really lose anything by selling the minion back in Bob’s tavern, and it could always have a handy battlecry. It will certainly make other heroes think twice about the order of their minions.

Passive Hero Power: Battle Brand
Cost: no cost
Ability: After you play a Battlecry minion, give a random friendly minion +1/+1

Battlecry minions are great to purchase, buff up your minions, and then sell back to Bob for a gold coin. Every time you play a battlecry minion, you’ll give a random friendly minion +1/+1, meaning Brann’s deck should focus on buffing up existing minions and leaving space on the board to buy and sell battlecry cards.

Passive Hero Power: Menagerist
Cost: no cost
Ability: Start the game with a 1/1 Amalgam that has all minion types

Minion types are beast, demon, murloc, and mech. It means cards that affect just one of these types will always apply to Amalgam. Don’t forget you can buff this Amalgam heavily, and having that extra push at the start of the game can make all the difference.

This hero power incentivises you to continually sell useless minions. Because of RNG this might not always go your way but if you’re lucky this power could prove very useful. 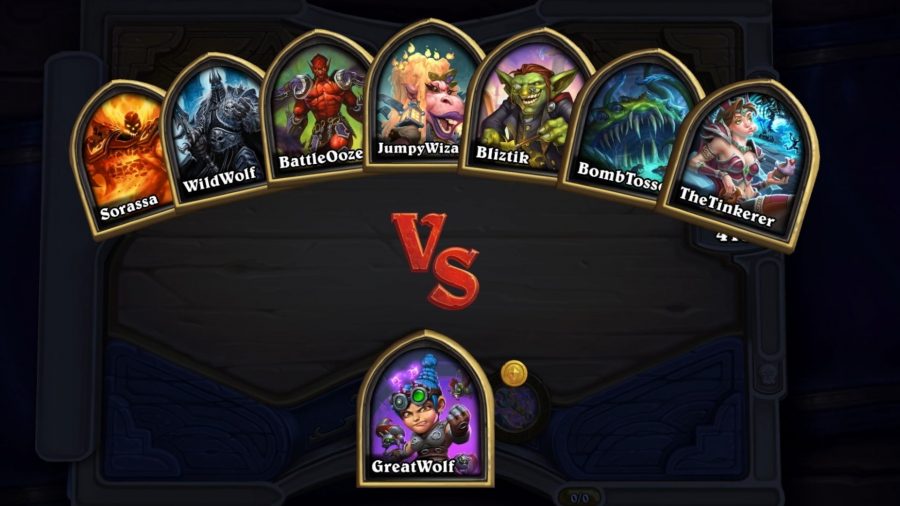 Hero Power: Sharpen Blades
Cost: one coin
Ability: Give a minion +1/+1 for each minion you’ve bought this turn

A great hero power if you’re buying up a lot of minions in one round, although potentially you could run out of coins to utilise this – you could always sell back a minion for an extra coin!

A hefty price tag, with large benefits. A divine shield prevents the first damage done to your minion and when some players get massive units on the board, this can be a lifesaver, literally. If you do pick George, make sure you go look at Nefarian’s hero power because for that one coin, he can undo all your hard work. One of the reasons you should keep an eye on who you’re battling next.

You get three secrets to choose from, however, when thinking about the amount of health and damage some minions can accumulate in this mode, I would advise you to take a good look at your other options. RNG heavy, you might want to pick something more reliable.

Infinite Toki has been nerfed so her ability now costs two coins rather than one. Her Temporal Tavern ability definitely still gives her a boost so make use of it while in the Tavern. Ultimately it’s a little RNG based but successfully receiving good minions from this refresh could put you way ahead of your opponents. 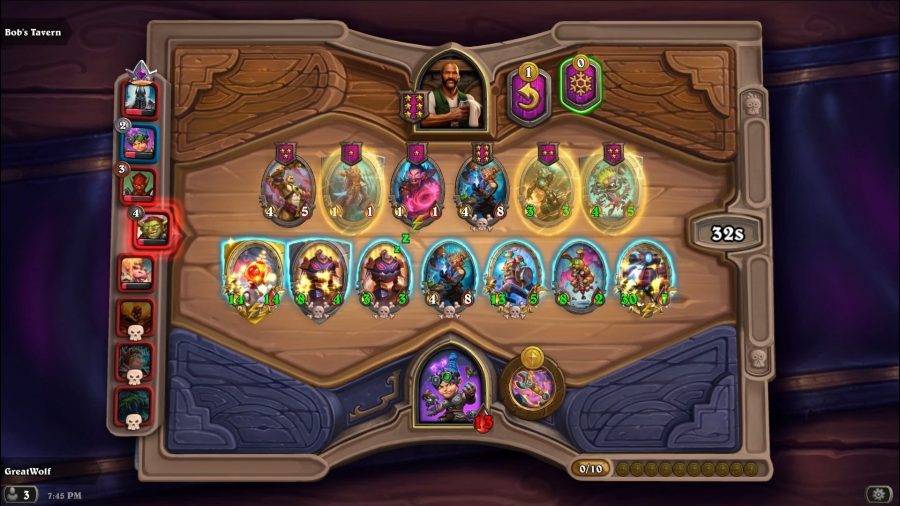 This hero power is free, yet not a passive ability. Taking some inspiration from a Warlock type deck, it’s down to you to decide if that two damage is worth that coin. A balancing act.

Hero Power: Reborn Rites
Cost: one coin
Ability: At the start of next combat, give your right-most minion Reborn

Reborn is a keyword that was introduced with the Saviors of Uldum expansion, meaning when your minion dies, it comes back to life with only one health left. Very useful for deathrattle minions, but also very useful when that minion’s passive abilities support and complement the other minions on your board. It either gives you a second chance or activates a deliberate deathrattle plan.

Simple, elegant. Does what it says on the tin. Just remember to play demons and you’re in the clear.

All the mechs you can buy will be a little better than your opponent’s by default. You just have to hope that you get mechs at all.

Hero Power: Nefarious Fire
Cost: one coin
Ability: At the start of next combat, deal 1 damage to all enemy minions.

At first glance, this power could be really good in the early game, or just ‘meh’ by the late game. One damage might not do a lot, except in the case of George the Fallen. If you are playing as Nefarian and know your next opponent is George, without a doubt, use your hero power to get rid of all divine shields immediately. You are his kryptonite.

Passive Hero Power: All Patched Up
Cost: no cost
Ability: Start with 50 health, instead of 40

You might think this is an amazing hero power, and yes by default you’ll be in first place for a little while. The only downside is that everyone else on this list has cool stuff elsewhere and by late game, if you’re behind then that 10 health isn’t going to mean much at all. 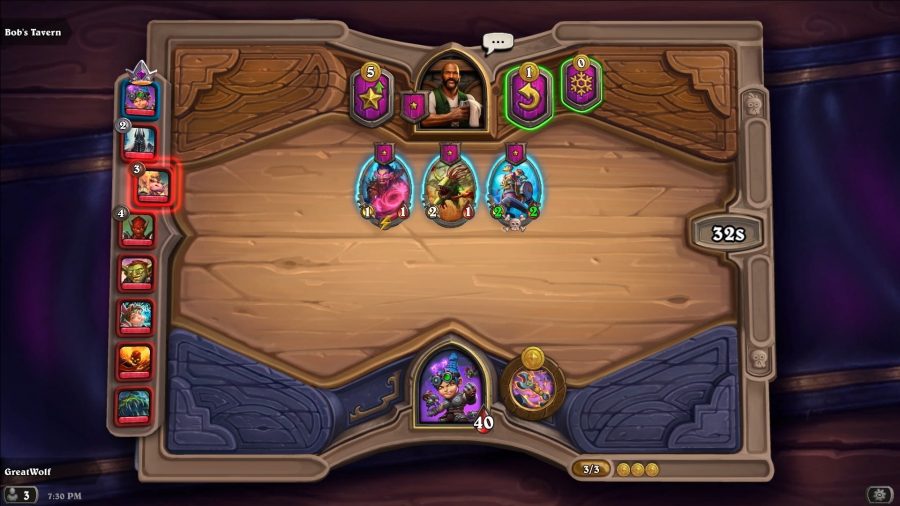 Queen Wagtoggle loves a good bit of diversity it seems. Done well for only one coin you get four health which is a bargain. The trade is that your board might not have a lot of synergy, and finding one of each group you’re glad to have on the board is down to Bob getting out the good stuff.

Oh Ragnaros, your voice lines are truly the best. You couldn’t expect anything else from the lord of fire and this hero power is effective. Early to mid-game, it’ll be pretty good but as boards fill up and health values boom, it might not be the most effective power around.

Passive Hero Power: King of X
Cost: no cost
Ability: Whenever you buy X give it +1/+1. Swaps type each turn. (Each turn X will be either beasts, murlocs, mechs, or demons)

A little confusing on paper, but actually quite simple. Each turn X will be a different type of minion group for that specific turn. It means you might struggle for a lot of synergy between your cards, however, the mix of cards and your options changing means freezing Bob’s Tavern will be a good way of trying to control your deck direction. 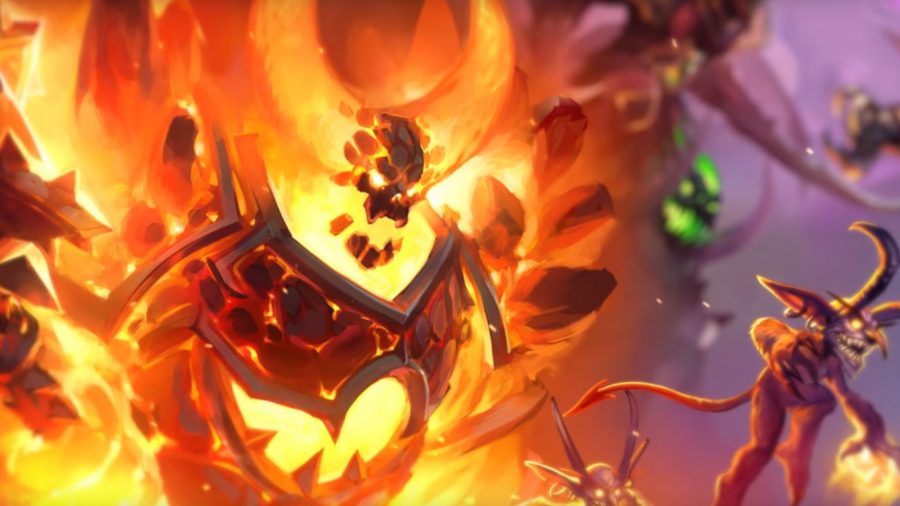 Battlecries can make all the difference sometimes, but you have to get a minion with a good battlecry first. Your priority when you’re Shudderwock is to find minions with good buffing abilities by themselves, so when triggered twice accumulate.

Passive Hero Power: Stay Frosty
Cost: no cost
Ability: At the end of your turn, Frozen minions get +1/+1

Freezing minions in Bob’s Tavern so you can afford them next go is a common move in Battlegrounds, so if you’re planning to purchase a card to make up a triple card, or if you’ve got your eye on these best minions in Hearthstone Battlegrounds, the frozen minions are guaranteed this small bump in stats.

Hero Power: Power Up!
Cost: one coin
Ability: Give a random friendly minion +1/+1. After you sell a minion, refresh this.

Since all the minions you have out on the board you’re likely to keep or upgrade to a triple card, this hero power is great at boosting their attack and health each turn. Although you can’t target the minion you want with this ability, by selling a minion back to Bob’s Tavern, there’s the extra chance of buffing up the card you need.

You’ll need to think about minion placement and order with this hero power, not just on the battlefield, but in Bob’s tavern. It’s a great way to give extra bonuses using battlecry cards.

Again, some RNG, however, I think it could be worth it. Later on in the game, paying a little less for the minion you really want can make all the difference. Late game specifically because you still have the money to buy that minion if your hero power fails to pick it.

As far as I can tell, this isn’t a particularly amazing hero. You can only level up your Tavern Tiers so far, so eventually this advantage becomes useless.

Passive Hero Power: Bananarama
Cost: no cost
Ability: Whenever you buy a beast, add a Banana to your hand

This hero power was buffed from sell beasts to buying beasts, and now King Mukla is a very competitive boss. There are a fair number of beasts in the game, and good ones at that so it helps Mukla build a lot of momentum very quickly. The power is reliable too – the only drawback is that you might just feel constrained by the minion type.

Hero Power: Murloc King
Cost: one coin
Ability: At the start of next combat, give your minions “Deathrattle: Summon a 1/1 Murloc.”

A hero power like this will keep your board plentiful, however, it is only useful if you find cards that buff murlocs. You’re betting on Bob’s Tavern giving you what you want, rather than the hero power being good in itself.

Hero Power: Fire the Cannons!
Cost: one coin
Ability: At the start of next combat, deal 3 damage to two random enemy minions

Great during the early game when this could get rid of two minions easily, giving you a leg up. Later on, you’ve got to pray these cannons go where you’d like them to.

Hero Power: Rage Potion
Cost: one coin
Ability: At the start of next combat, give your left-most minion +10 attack

Left minions will always attack first. Who they attack is completely random, but if your opponent is praying for a minion to survive you get a good chance to knock it out with that extra ten attack. A hero power with solid clearing potential.

Slow and steady might win the race. Health is a great resource in Battlegrounds and if your minions are tanky, it might just save your bacon. Perhaps a good hero power for beginners but it’s not going to pull off anything fancy.

The nuance of Trade Prince Gallywix is saving your coins for later on. I can’t think of why. so this actually seems like a bit of a dud of a power. If you could save to pull off a big trick later on then it would be ace, but as the cards stand, no massive plays look possible.