The meta we’ve become accustomed to is well and truly over. Arriving earlier than usual – bucking the 2020 trend – the final Hearthstone expansion of the year is upon us. Blizzard is taking players to the Darkmoon Faire – a funfair packed with rigged games, corrupt minions, and the homecoming of the Old Gods. The last expansion of the year usually has a higher power level than the rest of the card sets, and Madness at the Darkmoon Faire is no exception.

Hearthstone’s iconic Old Gods return in the form of four late-game threats that will shape Hearthstone for the next year and a half. However, the Darkmoon Faire reintroduces these ancient creatures with an exciting twist: each Old God has been resurrected with a new Battlecry. I was immediately drawn to Yogg-Saron, Master of Fate, who spins a wheel with six game-defining effects. These range from Curse of Flesh (fill the board with random minions), or Hand of Fate (fill your hand with random spells that cost zero), all the way to Rod of Roasting (cast Pyroblast randomly until a player dies). Yogg is undoubtedly worthy of the ‘Master of Fate’ moniker.

There’s a catch: you’ll need to play ten spells in a game in order to activate Yogg’s Battlecry. As a Rogue main, this requirement is all but guaranteed in anything other than an aggressive deck. My first game with a Secret/Yogg hybrid deck managed to survive against a Resurrect Priest until turn ten, right in time to play my Old God. As expected, the results were catastrophic.

My opponent’s board was filled with powerful minions, but Yogg doesn’t care about that. One spin of the wheel was all I needed to steal the game. The wheel landed on Rod of Roasting, clearing the board before attacking my opponent’s face directly. This type of RNG can be frustrating to play against because there’s literally nothing you can do once the card is active. Fortunately, this is the rarest of the six outcomes, so you only need to worry about getting burned 5% of the time (vs 19% for each of the other five). 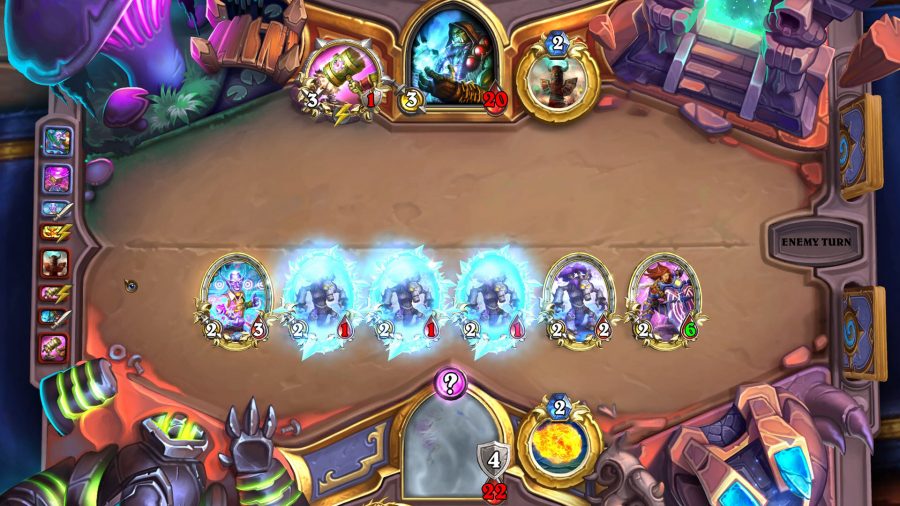 Speaking of RNG, another card I can see becoming problematic is the new Mage card, Deck of Lunacy, which transforms spells in your deck into ones that would usually cost three more mana, except they keep their original cost. And as this clever Redditor points out, building a deck geared towards hitting specific spells may not be as random as it seems.

As someone who has been on the receiving end of a Deck of Lunacy beatdown multiple times, this card gives off major Prince Keleseth vibes. Played early in a game, this spell completely destroys any sense of balance. In one match, my opponent drew into Overgrowth and Nourish to ramp up to ten mana… on turn four. Rubbing salt into my wounds, my opponent proceeded to play Yogg, which gave them a board of minions by Curse of Flesh, which included Kalecgos, and then proceeded to play Survival of the Fittest for zero Mana. No prizes for guessing who won that match.

The impact of the Old Gods cannot be overstated

Naturally, Madness at the Darkmoon Faire adds a new keyword: Corrupt. Corrupt cards can be upgraded to a new form by playing a higher-cost card. Compared to the mechanics introduced earlier this year such as Dual-Class cards, Spellburst, and Outcast, Corrupt doesn’t seem as interesting because not every class can utilise it effectively. There are a few Corrupt cards which are sure to make a splash, but I think they will be primarily played by Shaman, Druid, and Paladin. You can check out all the expansion cards here.

Shaman has been in a bad spot since the Year of the Phoenix began, but it looks like things might be finally turning around for Thrall. The reintroduction of the Old Gods gives the class the finisher that it’s been desperately wanting for the past year. In addition, Totem Shaman has been given a few more tools which could see the deck become relevant for the first time. The snowballing nature of Totem Shaman is even more difficult to stop thanks to Grand Totem Eys’or (at the end of your turn, give +1/+1 to all other totems in your hand, deck and battlefield). 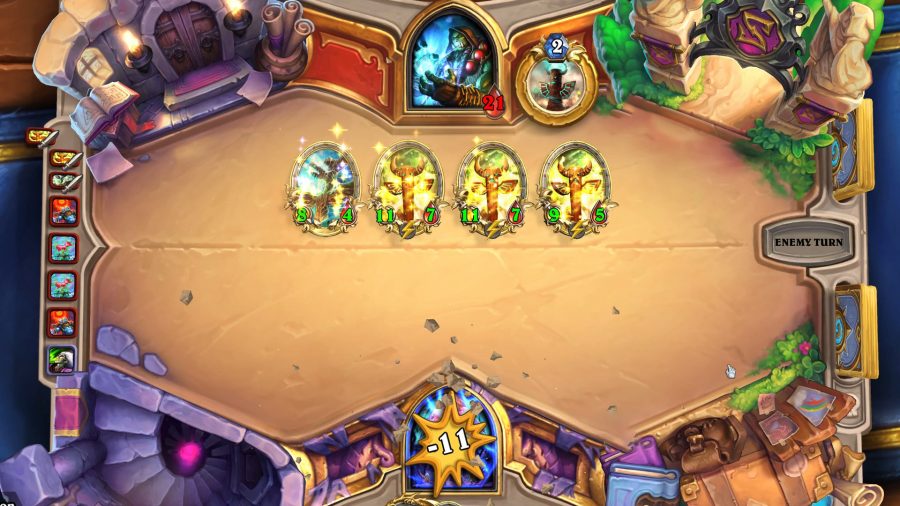 Lastly, Blizzard has completely revamped Hearthstone’s progression system in a change which has caused quite a stir in the community. Instead of rewarding consistent gold for completing daily quests, the new format switches to a traditional battle pass structure. At level milestones players now receive a mixture of gold, packs, and Arena tickets.

As someone who plays Hearthstone regularly, I prefer the new system as it feels like there’s more to do for the duration of an expansion. That being said, it’s easy to understand why players are frustrated as they aren’t receiving as much gold compared to the old system. Taking the changes to the duplicate protection system ushered in earlier this year into account, the change is much less drastic than it appears at first glance. Blizzard has responded to feedback considerably faster than it used to, so I wouldn’t be surprised if the current reward track receives some tweaks in the near future.

Need a new card game? Check out the best card games on PC

The impact the Old Gods will have on this latest expansion cannot be overstated, and I’m really looking forward to seeing what decks appear in Madness at the Darkmoon Faire. Though I only had the opportunity to witness the power of Yogg-Saron and C’Thun, there’s little doubt that N’Zoth and Y’Shaarj will be equally as destructive in the correct builds. Will Galakrond be able to contend against the might of the Old Gods? We’ll find out soon enough when the expansion launches later today.

If you’re looking for a good deck that’ll help you climb the ranked ladder, head over to our best Hearthstone decks for beginners guide to get you started. Want a different game to play? We’ve got a list of best free PC games which is sure to contain you’re interested in.