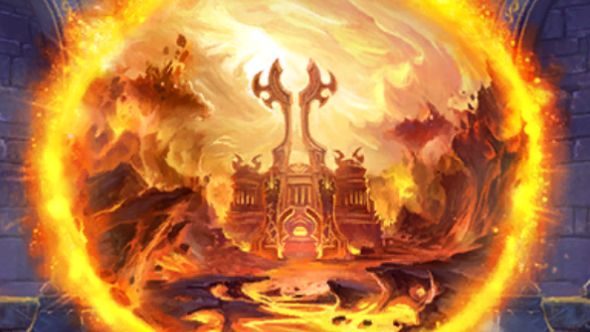 In a Q&A session via the Australian Blizzard Twitter, Ben Brode has replied to concerns regarding the power of commons in the arena game mode, particularly with Mage. He says that it’s bringing up larger problems in the game that need to be solved other ways.

Do have a look at our Karazhan card list for more of what’s coming next to Hearthstone.

This was one of several questions answer during a Q&A session with Twitter Australia today.

This, combined with an answer given by senior design Mike Donais in an interview with PCGamer, suggests that larger changes are on the way for how Blizzard handles arena. His reply regarding the power level of Babbling Book and Firelands Portal being similar was not well received.

As we mentioned initially, this could come in the form of a Standard-style limiting of available cards, or by changing card selection algorithms for the pick-three. As in the case of Standard, exactly how Blizzard deals with this will likely be under wraps for a while longer as they figure it out.

Original story August 2, 2016:Firelands Portal is an unassuming card when it comes to Hearthstone. Seven mana gets you five damage, along with a random five-cost minion added to your side of the board. Part of an as-yet-uncompleted cycle of portal cards that will see four more arrive in spoilers over the next couple of weeks, it deals a moderate amount of damage for its high cost, but the addition of a decent soldier to your army makes it an easy two-for-one. It’s flavourful, it’s cool, it’s probably too expensive and too random for the competitive constructed formats – and its got Arena players revolting against its implications.

A quick primer, in case you’re curious but uninformed. Hearthstone has two major formats, commonly called constructed and limited. Constructed is the main mode that is played competitively, has a ladder and uses whatever cards you have in your collection to make decks and go against opponents. Limited, meanwhile, is the Arena – where you pay to enter and get to pick 30 cards, one at a time from three possibilities, and face off against others who’ve done the same. Once you’ve lost three times, you need to pay to do it again.

It’s balanced around which cards are common and which aren’t. The classes with the better common cards will get to build more powerful decks, as they’ll be more likely to see more commons over time. It also has its own distinct metagame which mostly revolves around making sure you have a good ‘curve’ of cards – something to play on each turn that costs as much mana as you have, making it as powerful as possible. Kill all your opponent’s stuff because you had something every turn, then kill them.

This makes cards like Firelands portal incredibly powerful, even if they cost a lot of mana. They allow you to turn a game around by getting a certain amount of value out of first the card itself, then the minion it creates. Someone’s done the maths and you’re pretty likely to get at least eight mana worth of stuff out of the spell, with possibilities of much higher. ‘Removal’ – cards that kill minions on the board with few caveats, such as this – is already at a premium in Arena, making the damage itself worth more than it would be elsewhere.

Good cards existing, and being at common, isn’t really the problem. The issue is the class to which it is tied, Mage, already being one of the very best in Arena. It and Rogue sit comfortably at the top of Arena win rates, even when factoring in the massive skill gaps between players. It getting more great cards at common doesn’t help, even as the card pool dilutes. Had the card been tied to the Priest class, which is considered unplayable by a large number of people, it might have been seen as a boon.

One of the more popular community Arena streamers and YouTubers, Octavian ‘Kripparian’ Morosan, made a video breaking down the whole situation. There’s a little strong language, if you’re averse.

There’s also various Reddit threads expressing displeasure with both this decision and Arena as a whole, seen as the awkward step-brother of Hearthstone’s more competitive ladder mode and Tavern Brawl’s just-for-fun.

Some suggest simple fixes, like changing the rarity of the card, while others think it’s a more endemic problem that requires bigger solutions. It’s possible Arena could be split into smaller formats using only recent sets, as ladder play did with the wildly-popular introduction of the Standard format earlier this year.