Ahead of the release of the new Hearthstone expansion, The Boomsday Project, three brand-new cards have been revealed. In a video posted earlier today, senior game designer Peter Whalen discussed the three cards, as well as what we can expect to see with the rest of the expansion.

The Boomsday Project will see the return of Dr. Boom, who last showed up in the Goblins vs Gnomes expansion, and brings science and silliness to Azeroth. Each class will have its own science lab, manned by a legendary scientist; one of the new cards that’s already been released, Electra Stormsurge, is a legendary mage who runs the meteorology lab.

Unsurprisingly, Hearthstone features on our list of the best card games on PC.

If you’re after a few more cards, Blizzard has been running a charming series of animated shorts showing off some new cards of their own. Each week, a new video (featuring the aforementioned Peter Whalen, currently trapped in the body of a robotic chicken) shows off a new card ahead of the expansion’s full release.

Check out the video below for our own take on the new cards:

If that wasn’t enough, you can get a closer look at all three new cards in the images below.the first new card, Flobbidinous Floop, will lead the biologist’s haven that is the Druid lab.

Floop is a 4-mana, 3 / 4. His gimmick is that while he’s in your hand, he’ll transform into a copy of the last minion you played, but he maintains his own stats. That means that he could play a more powerful version of a simple charge minion, for example, or get a cheap version of a high-mana card like The Lich King. 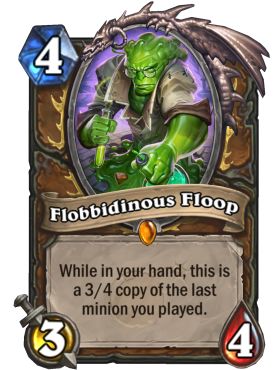 The second card is Supercollider. This epic Warrior class weapon costs five mana, and comes with 1 attack and three durability. That’s not too strong by itself, but its ability means that after you attack an enemy minion, that same minion will be forced to attack one of its neighbours (as long as it survives). 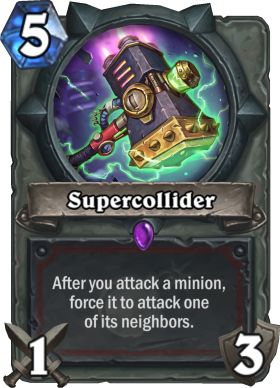 Last but not least, there’s Whizzbang the Wonderful. This 4-mana 4/5 legendary neutral is perfect for those of you who don’t like all that pesky deck-building. When Whizbang is in your deck, you don’t even need a deck, as he’ll replace all your cards with a random choice of one of eighteen decks of his own creation. He might not be the most on-meta pick, but he’ll be great for the more experimental Hearthstone player. 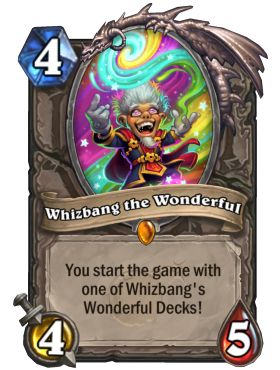 If you’d like to know more about The Boomsday Project and the new cards, check out senior game designer Peter Whalen talking about the new cards in this video.