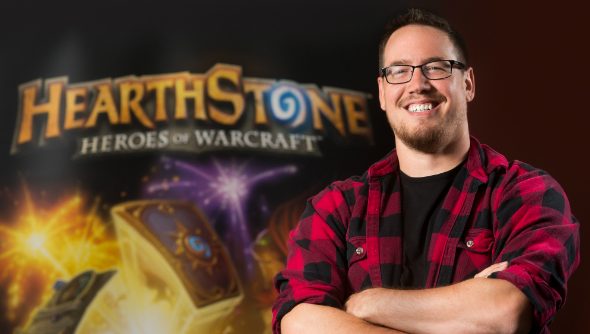 Update January 10, 2017: Following the recent chat about wanting to do more Hearthstone designer insights videos, Blizzard have announced the date of the next one, and it’s going to be live.

“Pull up a chair by the hearth,” says the official release. “Join Hearthstone game director Ben Brode and game designer Dean Ayala January 13 at 9am PST for a live Q&A session on Twitch. Our developers will be sharing some insight about the state of the game, the new player experience, the ranked play system, and answering your questions live.”

Related: brush up on your card knowledge with our list of the best Hearthstone decks.

You can submit questions for the Q&A livestream by commenting beneath the blog post. Alternatively, you can tweet @PlayHearthstone with the hashtag #QA, and with your question.

Obviously you can join the stream and pop questions into the chat there, but obviously Twitch chat moves fast. Here’s the embed if you want to pop back when it starts in a few days. If not, it’ll be on YouTube after.

Original Story January 3, 2017: Blizzard have been getting requests to put out more Hearthstone designer insights videos, but they’re a lot of work for the few willing to do them and they’re currently made in their free time. It’s not as simple as getting more people working on them either, as some Blizzard staff don’t want the spotlight, or at least the harassment that often comes with it.

Hearthstone game director Ben Brode is currently in charge of making the videos, which he does in his free time after his son goes to bed, in a little sectioned-off area in his bedroom. He then sits there and reads his script until he has it nailed in one take, then it goes off to the team, they notice something missing, and he has to do it again. It’s hardly time efficient, and Blizzard want to make it better.

“This is all pretty dumb, so we’ve been working on getting space that is permanently wired for making these types of videos at work,” Brode said on Reddit. “It’s more challenging than you’d imagine as often we have trouble finding an empty conference room to have a meeting in, much less a room we want to leave empty all the time so nobody messes up our lighting rigs.

“Regardless! I love doing videos, and I think I can convince more of the team to get involved, so it’s not just me. Not everyone is as excited about being a public face as Yong and I are, though – there is a lot of harassment that comes with being more public.”

This sentiment was mirrored in the HearthPwn forums, where a moderator spoke to the community about such harassment.

“We’ve gotten to an interesting point where we want more of something but due to the toxic nature of many comments directed at the Hearthstone team, no one from the team wants to come out and talk and it’s actually not very interesting at all, just sad,” said Fluxflashor.

“Although you may not agree with certain philosophies that the team may have about the game, it is important to post with respect and stay constructive. We should be welcoming communication first and foremost, so let’s make that more of a priority this year and not feed those who want to cast plagues upon the creators. On the moderation side we can only do so much since we’re only one site of many within the community, but as a whole, we need to stop letting the really toxic posts stew.”