The Frost Lord Ahune is pissed at Ragnaros for the success of his Midsummer Fire Festival, and wants to show all of Hearthstone how it’s done with a much cooler party.

Here are all the Knights of the Frozen Throne cards we know about so far.

The Midsummer Frost Festival will last three weeks, and has already kicked off with a new tavern brawl in which Ahune himself challenges you to destroy effigies of Ragnaros. A frosty theme has been applied to the arena and your emotes. Every week, you’ll get a free arena run and a quest which will drop a Knights of the Frozen Throne card pack. Although, obviously, there’s a freeze on opening those packs until the expansion arrives.

You can blame Ahune himself for that one, by the way. His announcement of the event over on the Hearthstone blog is an avalanche of magnificent snow-based puns, and is worth a read. 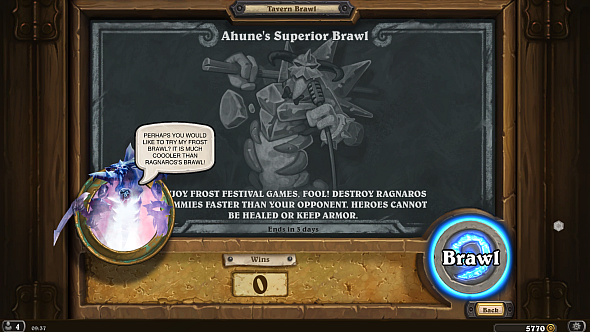 If you’re a fan of this sort of thing, it sounds like we can expect more in the future: Hearthstone designer Dean ‘Iksar’ Ayala says on Reddit that “in the last year and a half or so we dedicated a team to what we call live content; that includes brawls, fireside gatherings, events like these, and a bunch of other cool stuff. I’ve been excited for these two events to go live for awhile now and I know they have a bunch of other things in store for the future you all will enjoy.”

Time-limited events have helped to propel the success of many hobby games, from Overwatch to Destiny to World of Warcraft. In some ways it’s a surprise we haven’t seen more of them in Hearthstone until recently.