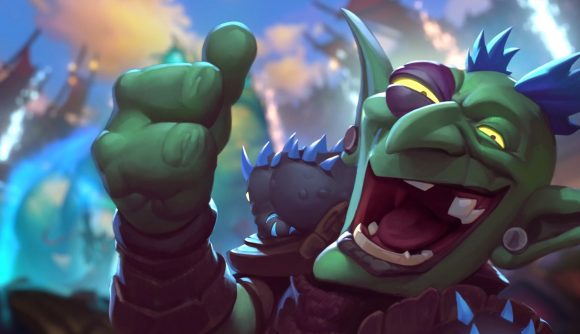 Ahead of the release of the latest Hearthstone expansion, the troll-themed Rastakhan’s Rumble, we’ve got a brand-new card to show you. This time around, we’re showing off Gonk, the Raptor, brilliant for any druids and/or Jurassic Park fans who want to get a little more use out of their hero power.

Gonk, The Raptor is a legendary, seven mana 4/9 card. It doesn’t pack too much of a punch for a something that costs seven mana, but that’s made up for in part by its health, which should allow it to take a bit of a beating. That’s particularly helpful when you consider its effect, which, this being a legendary card, is what you’re really interested in.

Gonk, The Raptor’s effect means that “after you hero attacks and kills a minion, it may attack again.” That’ll work nicely when it comes to mopping up some of your opponents’ more resilient minions, and will also offer some pleasing synergy with Druid’s hero power, which grants players one armour and one damage each time they use it.

As long as you’re willing to take the hit, Gonk means that you can continue to use your hero to clear up the board (just don’t cripple yourself in your attempt to clear out enemy minions). As long as your raptor friend sticks around, you can continue to attack at will, which makes his decent HP a nice selling point. Buff that health pool, and you’ll be able to keep Gonk around even longer. 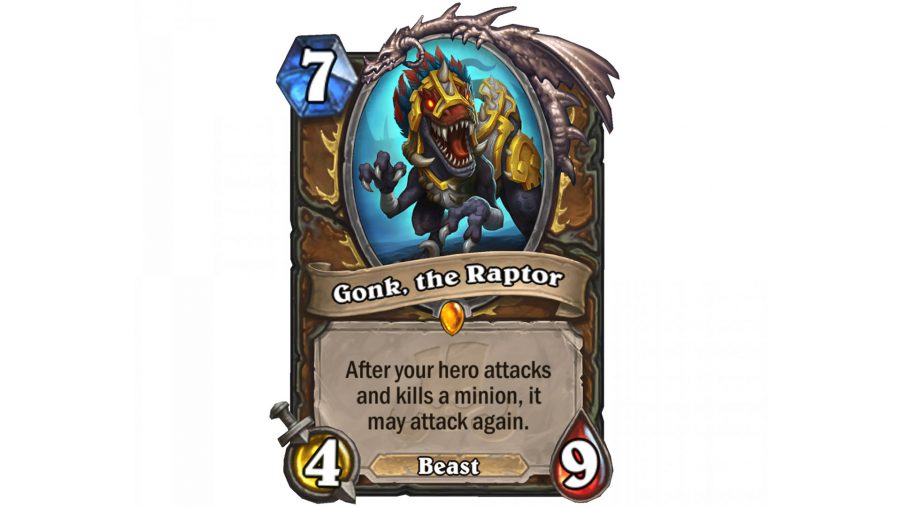 When it comes to synergies, there are some useful cards lurking in The Witchwood. Withing Hour will let you resummon Gonk later in the game for a dramatically reduced cost, letting you run rampant on your opponent’s board a second time. If you’re really lucky, you can use Gonk alongside Twig of the World Tree, using up your weapon in a single turn and granting yourself an extra ten mana.

Check out our exclusive reveal of a new Rastakhan's Rumble card: Gonk, the raptor! Read more at PCGamesN: https://www.pcgamesn.com/hearthstone/hearthstone-gonk-the-raptor-rastakhans-rumble

The new expansion is due to arrive on December 4, and you can check out our Rastakhan’s Rumble card list for a closer look at some of the new additions to the game. The troll-themed brawl will accompany The Witchwood and The Boomsday Project as the final expansion in 2018’s Year of the Raven.