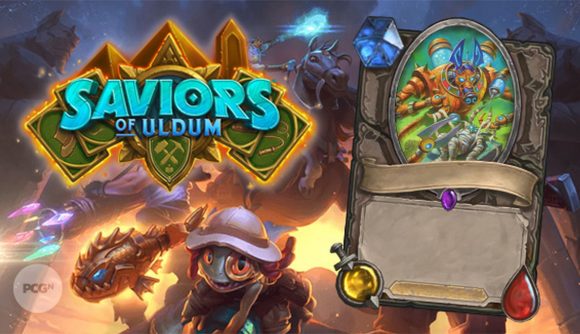 Hearthstone’s next expansion, Saviours of Uldum, launches on August 6, and will continue the League of Evil’s dastardly plot that kicked off with Rise of Shadows. As ever, we’ve got an exclusive new card to reveal for you, to help you plan out your decks ahead of time.

This time around, we’re showing off Mortuary Machine. This neutral, five mana, 8/8 mech is an epic minion, and comes with some impressive stats, but you’ll want to be aware of its effect, which reads “after your opponent plays a minion, give it Reborn.”

‘Reborn’ is a new mechanic set to be introduced with Saviours of Uldum. Minions that have the effect don’t die the first time you reduce their health to zero. Instead, they return to life on one health, ready to fight another day. For your minions, that’s great, but giving that buff to your opponent? Not so good. Thankfully, there are some ways to ensure that Mortuary Machine doesn’t just hand your foe an easy victory.

The minion’s generous stats mean that if you can get it out in the early to mid game, it can cause some decent damage. All that would be meaningless if your enemy’s cards could all just come back to life, but if you play the card into a Priest deck and silence it, its effect will no longer be in play, and those Reborn effects won’t come into play. 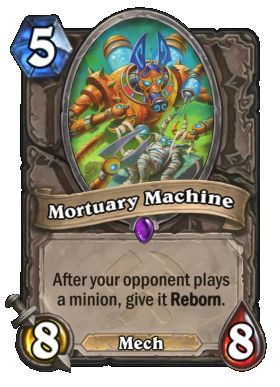 Alternatively, as Mortuary Machine is a mech, you can take advantage of The Boomsday Project’s Magnetic mechanic. Putting a magnetic minion like Wargear will make the resulting combination’s stats incredibly powerful, while opting for Missile Launcher will do the extra bit of damage you need to ensure you clear the board.

Blizzard will be unveiling new cards over the next few days, but you’ll need to wait an week or so before you can head to Uldum and reunite with the League of Explorers.