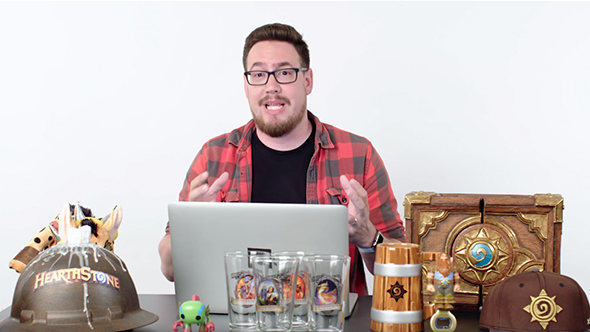 The internet has some things to say about Hearthstone, as they do with most topics. Some of those things take the form of questions, and luckily designer Ben Brode has answers, which he’s happy to provide in a new YouTube Q&A video. Here are some highlights.

Check out the full Witchwood card list  so far.

His first questions lays out some fire, asking “Does nobody at Blizzard have a better idea than ‘the coin’ to balance going second in Hearthstone?” The answer is no. Brode gets far deeper on the reasons why, but they experimented with a bunch of different ways to balance the first turn advantage, and ultimately their idea for the coin was the only one which properly split the difference between solving the problem and being fun.

Brode says there’s a “very high” chance of new cards being added back to the classic set. Most likely less powerful ones that help to strongly sell the identity of a class. Mage is a particular example, as Brode says the class is currently short on cards, but he didn’t say which cards in particular might make a return.

You’re unlikely to see a new mode messing with a bigger deck limit. The team experimented with 60 card decks where every single card had to be different, and while the wildly varying matches were fun it proved difficult to build compelling decks. Maybe something for a Tavern Brawl, but not a core mode.

There will be ways to get old card backs, but they want players who got those backs originally to continue feeling special, so the “friction” for a second chance would have to be pretty high. Once again, nothing to be announced just yet, but it’s in discussions.

How do you become a pro Hearthstone player? Brode says “Forget college, just play Hearthstone.” He also suggests not letting your parents see that answer. Truly, Brode is a role model to us all.

If you want the full answers to these questions and more – like whether there are female kobolds – check out the full video above. We’ll see what gets implemented as the Year of the Raven rolls on, starting with the Witchwood.