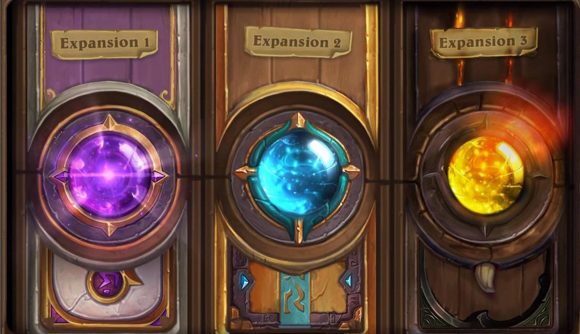 Blizzard has unveiled the first handful of details Hearthstone’s next round of new content, as 2019 brings us the Year of the Dragon. Among the early bits of info was an image hinting at the three expansions due this year, and as always Hearthstone fans have picked apart the clues in the teaser to guess at the themes for all the big releases.

The most popular theories suggest that the first expansion will related to Kirin Tor or Dalaran – either way, the purple glow and bits of runic imagery suggest an arcane and mage-focused theme. The second is a bit harder to pin down. The design is reminiscent of Titan architecture, especially as it appears in Pandaria, though it could also point to Nazjatar. (It’s worth noting that there are plenty of Pandaren in the adventure teaser image.)

Expansion three looks very much like the Iron Horde from Warlords of Draenor. From the dark wood, iron, and flames to the little tusk that pokes out from underneath fits with the Iron Horde, and the gem is suggestive of the bronze dragonflight – one member of which aided the founder of the Iron Horde.

It’s worth noting that the community’s speculation has occasionally been wildly wrong in the past, though all the pieces in these popular Reddit theories seem to fit.

You can get a brief explainer on Year of the Dragon above.

Related: Check out the best card games on PC

Whatever form the expansions end up taking, Blizzard plans a story-focused approach that’ll likely bridge across all the individual releases. That means you can expect more connective tissue between expansions than we’ve usually seen in the past.