Hearthstone’s next expansion, Madness at the Darkmoon Faire, sees the return of some old favourite cards, most notably the Old Gods themselves – N’Zoth, C’Thun, Yogg-Saron, and Y’Shaarj. For those that remember these icons from the Whispers of the Old Gods expansion, they’ll be reimagined in a new carnival setting as the residents of Azeroth enjoy a day out at the fairground, only to be ensnared by the slippery suckers.

Of course, there’s also a new keyword – ‘Corrupt’ – and four Old God Artifacts that can trigger the abilities of the previous versions of the Old Gods. Madness at the Darkmoon Faire will also launch alongside a brand new Hearthstone mode, Duels, with season one kicking off with Wizard Duels, featuring the Scholomance Academy instructors as heroes with new powers. Look out for our impressions of this new mode on the site shortly.

For everything about the upcoming expansion, though, we were fortunate enough to chat to card designer and live content lead for the new expansion, John McIntyre, about this new carnival-themed set. Read on for our interview, in which we discuss everything from the big plays you can expect from the reimagined Old Gods to the types of decks and classes they’ll suit.

PCGamesN: The new expansion sees the return of some legendary cards. Why did you think the time was right to reintroduce them?

John McIntyre: Part of it is timing. Whispers of the Old Gods was four years ago, and it was a really popular expansion. People really meshed with and loved the characters – I’m referring to N’Zoth, C’Thun, Yogg-Saron, and Y’Shaarj. These four cards were these giant moments in games, they were the centerpiece of your decks, and they each serve different players. So we tried to capture that in our designs – these are all ten-mana neutral cards, and they all drive different deck archetypes.

Getting started? Check out the best beginner Hearthstone decks

We put them in the Darkmoon Faire because that’s another setting we wanted to do for a really long time. One of the issues with Darkmoon Faire as a set is there isn’t a lot of conflict in that setting, so Old Gods help introduce that. [Equally], there isn’t a clear setting if we were to just do an Old God set, so we knew we wanted to put the Old Gods somewhere specific. So the two play off each other: this jovial, crazy fair, and then these twisted, maddened creatures. We just love how those two play to one another’s strengths. 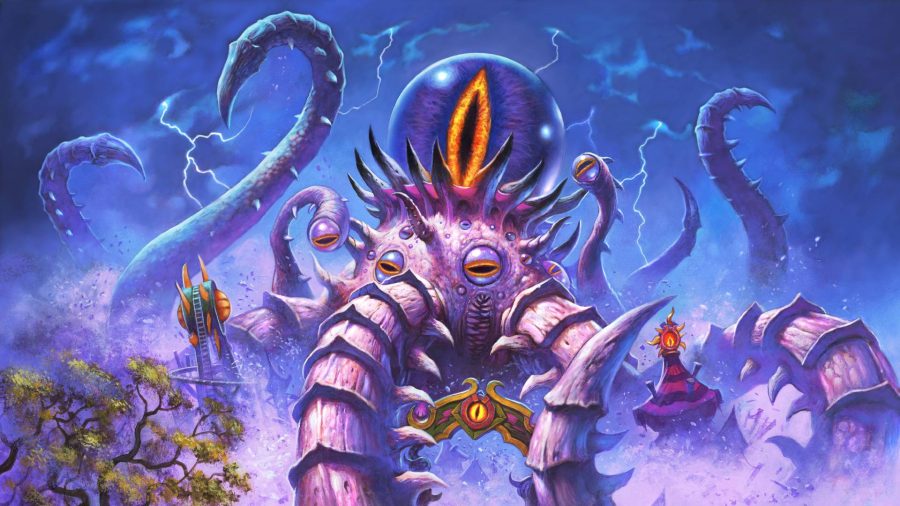 What kind of big plays can we expect from these returning Old God cards?

Y’Shaarj is a really slow control deck, depending on the Corrupt cards you have, because Y’Shaarj returns your Corrupt cards back to your hand. Different classes have different Corrupt cards, so the way you kill your opponent with Y’Shaarj is very different depending on which class you’re in. Some will be able to just burn their opponent down, so that’s pretty flashy! C’Thun is always a big moment. It’s a card that splits into different pieces, and you have to play them all to reassemble C’Thun, and then you get to play them and deal 30 damage, so that’s a flashy moment too.

the biggest moment of all has to be Yogg-Saron, That's our character that's known for being unpredictable

But I think the biggest moment of all has to be Yogg-Saron. That’s our character that’s known for being unpredictable, it’s a fan-favourite for people who just want to have that crazy moment where it feels like anything is possible. And Yogg-Saron slams a big wheel down on the board, and it starts spinning, and it slows down when you click it. Like a prize wheel, it has different wedges and a peg at the top, and when you land on a prize, the effect will immediately happen. These effects can be something like, ‘fill your hand with spells; they cost zero this turn’. Or ‘steal three minions from your opponent’, or ‘fill the board with random minions for you and your opponent, but your minions get Rush’. So it’s completely unpredictable. I can’t wait to see how it’s going to play out.

I really like the randomness, but I have to admit, there’s a bit of irony that Yogg-Saron, as a god, is passing the buck up to the gods of RNG.

Yeah, people often say ‘praise Yogg’ or ‘Yogg take the wheel’. Yogg-Saron’s name is ‘Master of Fate’ and his voice line is “your fate is bound to me now”. That he’s deciding your outcome is our fantasy [for him]. So Yogg literally takes the wheel from you and spins it, that’s his angle: he’s the unpredictable, crazy Old God to serve those sorts of players. 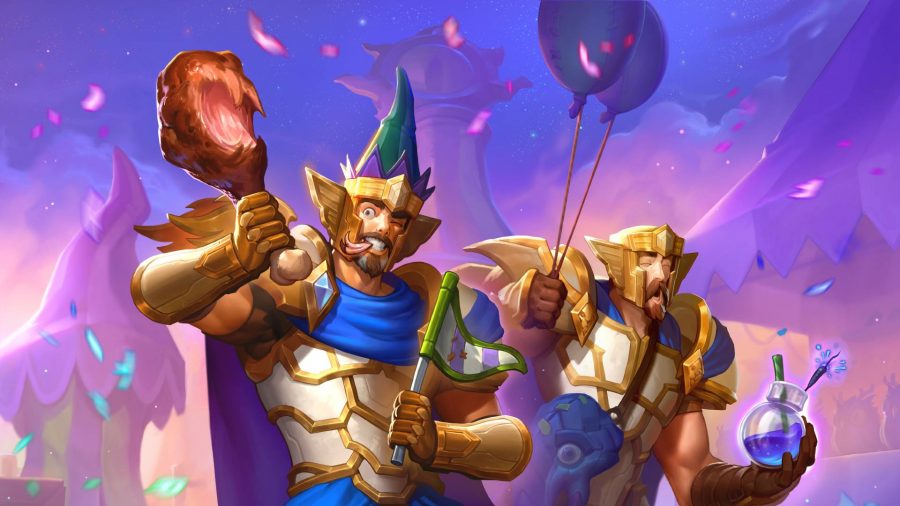 You mentioned the new keyword Corrupt. How does it work?

When you have Corrupt cards in your hand, and you play a card that’s more expensive than them, the Corrupt cards upgrade in-hand. So Corrupt cards have these two states: pre-corruption and post-corruption. This is a one-time trigger and hopefully you have some cards in front of you so you can see what’s changed. We really love this mechanic because it tells a great story of the Faire, and how the Faire gets corrupted over time. Taking these characters or spells and settings and seeing what they look like once twisted by the Old Gods is a really fun thing to explore, and I love all the art that we got as a result of that mechanic.

Can you give an example of how Corrupt can make cards stronger? Is there a specific interaction between some cards off the top of your head?

They’re baked into the cards themselves. An example is ‘Corrupt: gain +4, +4’. This card would go from a five mana of 4/4 to a five mana at 8/8. And one thing that’s really cool about this is it’s a permanent transformation. So if you resurrect it, say with N’Zoth who resurrects a minion of each tribe, it’ll come back as an 8/8. And so you can kind of get the benefit from that corruption twice. 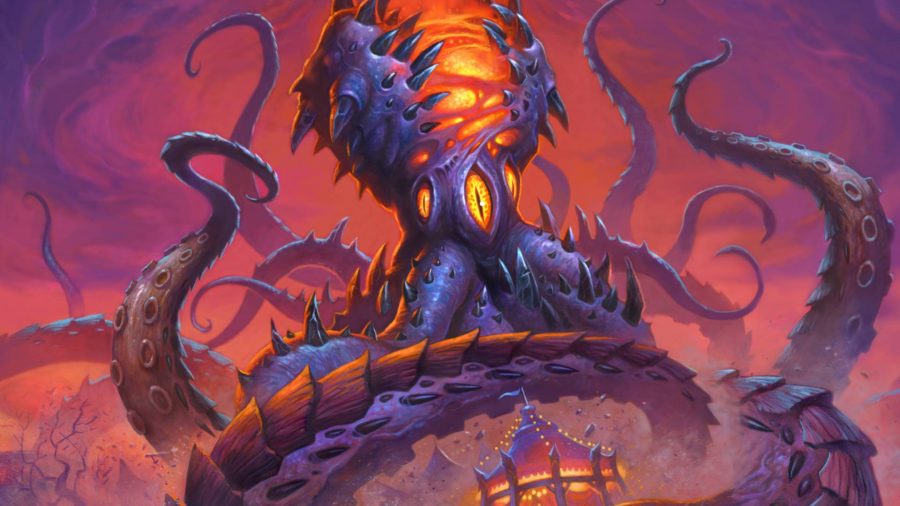 Will there be any card that complements and/or buffs the four legendary cards, like there were previously?

There aren’t in this set, like specifically cards that call out the Old Gods. When designing it, we tried some of that stuff as we explored many different designs. As a designer, the Old Gods definitely took up a huge chunk of our time. We knew they’re a big part of our set and we went through a lot of iterations, but these four designs are the ones that met our goals.

Deal me in: check out the best card games on PC

Originally we thought, ‘Hey, what’s the one that’s going to be like old C’Thun’? Where it was very easy, or very obvious, how you would build the deck. With the previous C’Thun, there were a bunch of cards that said, ‘Hey, buff your C’Thun’ and you go, ‘okay, I’m going to take all those cards and put them in my deck, I’m going to take C’Thun and put it in a deck, and now I have the C’Thun deck!’ We tried to emulate that with Y’Shaarj, and what we landed on was that being our flagship card for the Corrupt mechanic. So, you see Y’Shaarj, and that it cares about Corrupt; throw in some Corrupt cards and you should have a pretty powerful late-game threat. 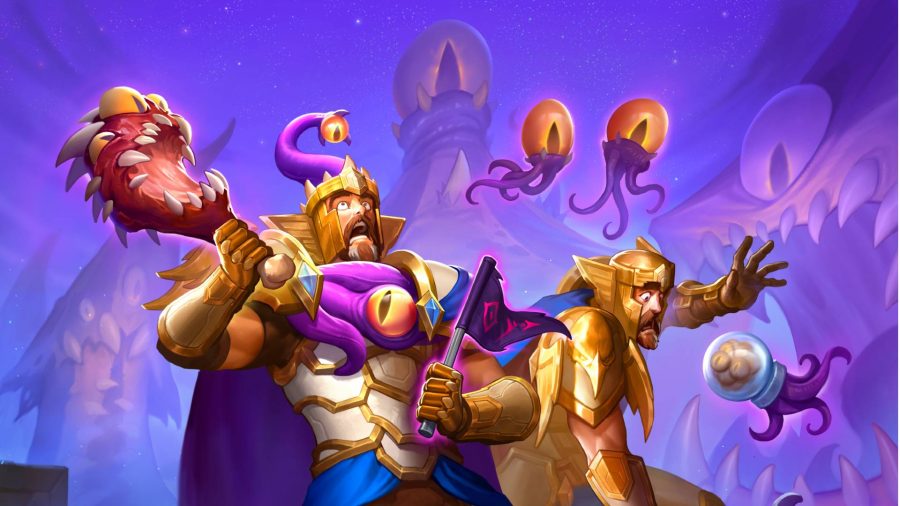 Are there any particular heroes that the God Cards are suited to?

Yeah. So when we were designing the set and making all the cards, we definitely tried to push different classes towards different Old Gods. And sometimes we tried to push some classes to multiple Old Gods. For example, Paladin is quite good with N’Zoth. Yogg-Saron, which cares about spells, is great with Priest, Mage, and Druid, and the decks that we’re seeing right now that have a lot of spells. C’Thun is really good in Rogue, and maybe Control Warrior. And then finally, Y’Shaarj has a lot of potential in Warlock.

Can you explain how Old God artifacts work?

When we were designing Old Gods, we were like, ‘oh, these new Old Gods are really cool, but it’s very nostalgic and reminiscent of the original designs’, and I wish that I got to play with them. In Saviors of Uldum, we made a card called Puzzle Box of Yogg-Saron that said ‘cast ten spells randomly’, and it was a throwback to the original Yogg-Saron design. So we decided to do that again, and made one spell for each Old God. So, as we show more cards, you’ll see things calling out those Old God names, and you’ll be able to see that they’re sort of a throwback to the original God designs.