Duels is Hearthstone’s new mode, in which you slowly build a deck between matches against other players online. There will be updates with every new season adding new heroes and powers, with season one – called Wizard Duels – featuring the professors from Scholomance Academy.

If Duels were a Hearthstone card, it would be Nightmare Amalgam. It’s a mashup of Solo Adventures and Arena mode, as well as one of strategic play and, well, blind luck. As such, it struggles to find a place. Hearthstone’s lead live content designer, Patrick Nagle, points out that fans have been asking for a PvP dungeon run for a while now, but that Duels is “a departure from the dungeon runs of the past, like Kobolds & Catacombs and Saviors of Uldum, in that you get to make your own deck this time. So, you get to use the unique cards that are in Duels, and slowly grow that deck to become a little bigger, and a little more powerful.”

To start out in Duels, you first need to choose a class from the usual pool, but there are all-new heroes with brand new powers to explore. I choose the Hunter, because I love beast plays and it’s the class in which I’m usually most confident. The hero power is ‘deal two damage to the enemy minion, then give a random friendly minion +1 attack’. As I’m new to the format, I don’t risk any bold moves and opt for chipping cards like Unleash the Hounds and lots of small beasts to control the board, paired with plenty of secrets to prevent my opponent from getting ahead. You start off with these cards in your deck, as in dungeon runs, and slowly accrue more cards between rounds.

As Nagle explains, “All the heroes are new heroes, based on Scholomance Instructors, and all have their own hero powers and unique treasures. You get to see how those powers and treasures work together and kind of build a deck around it. It’s a really cool deck building mode that’s pretty easy, because the decks are small and your hero power and treasure gives you a lot of guidance on how to build them.” But this is only true to a point. You start with a small deck and add your choice of three-card bundles after each round, win or lose. So yes, this is manageable at first, but if you make it far enough you’ll inevitably have a deck that far exceeds the usual 30 cards – I was still adding to my deck even after it numbered 45. 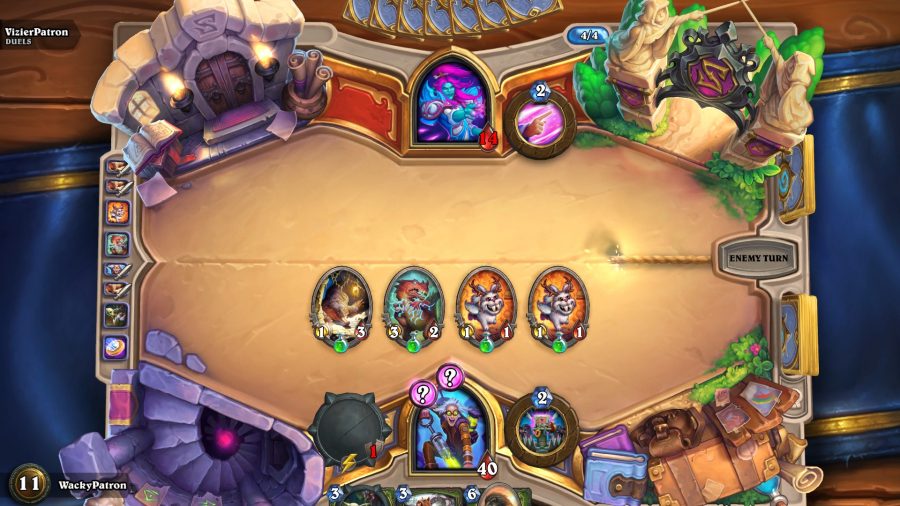 As you’re constantly adding to your deck, it makes it difficult to plan power plays and I really don’t recommend doing so. Instead, go for adaptable cards that complement one another, bearing in mind that if your deck becomes too bloated, relying on consecutive card plays rarely pays off (this is the guides writer in me coming out here). This was the case for a Mage I came up against – usually my deck wouldn’t be powerful enough to sustain a Highlander Mage deck, but unfortunately (for them) their big moves didn’t come together and I came out ahead.

Even when facing the same class with the same treasures, my choice to stuff my deck with small beasts proves unstoppable

Again, like Arena, you have three lives until you’re out. My first two matches didn’t go swimmingly so I thought my fate was sealed. However, you also gain ‘treasures’ between rounds, which grant various, usually passive, abilities. These include things like dealing one damage to the first minion your opponent plays each round, to extra special cards to add to your deck.

This is where the aforementioned blind luck rolls into view, as two of the treasures I’m offered are ‘your minions that cost two mana or less gain poisonous’ and ‘at the start of your game, play two random secrets’. With these treasures I am able to create a practically unbeatable deck. As Hearthstone veterans will know, any minion damaged by a poisonous one is instantly killed, and now I have loads of them. Even when up against another Hunter with the exact same treasures, my decision to stuff my deck with small beasts proves as unstoppable as it is unique. 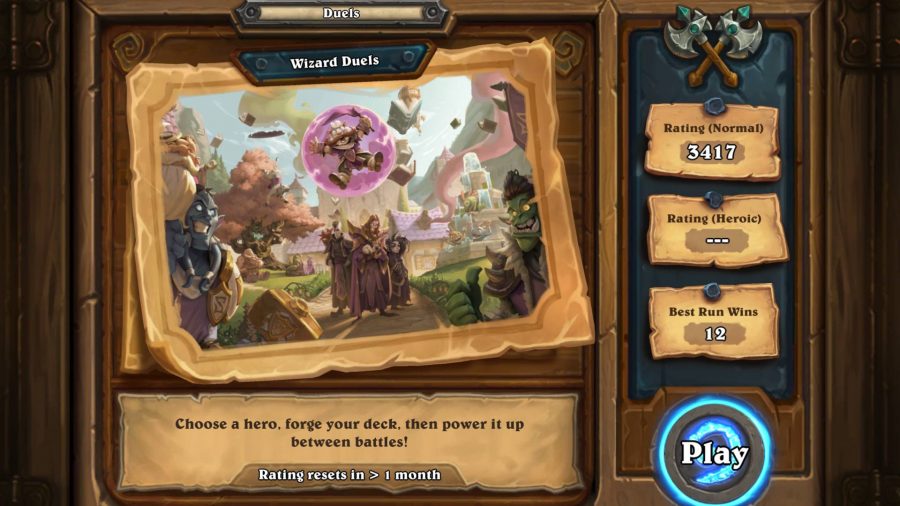 As I rack up wins I am led to wonder how many games you can win until it’s over. The answer is 12, the same as Arena. After my two losses, I win those 12 games in a row (for a total of 14 games played, meaning my deck in my final game would’ve contained around a nonsensical 54 cards) and beat the mode, swarming every opponent in a tide of insta-killing critters and slaughtering all in my path. This isn’t me showing off – I didn’t plan this (I’ve never in my six year Hearthstone career beaten Arena, I’ve gotten pretty close at seven wins, but never to 12). I just happened to have chosen only minions that cost two mana or less and cards that generate lots of them, such as Unleash the Hounds, Snake Trap, and Adorable Infestation. In another happy coincidence, I’ve also taken cards that complement secrets, such as Eaglehorn Bow (whenever a secret is revealed, gain +1 durability). In fact, I have two of those.

Related: Check out the best card games on PC

The saying goes that victory is sweet, but mine comes with a little bitterness. The news that Hearthstone is launching a new mode should be music to my ears – I’m a sucker for this kind of thing. But my victory feels cheap, and I haven’t much enjoyed the effort of getting my head around my endlessly bloating and mutating deck. It’s felt less like an enjoyable exercise than an arbitrary struggle. And while you can dip in and out of Duels during a run, I fear that doing so would make it even more difficult to keep a handle on what my deck actually is, much less build toward one with a coherent game plan. 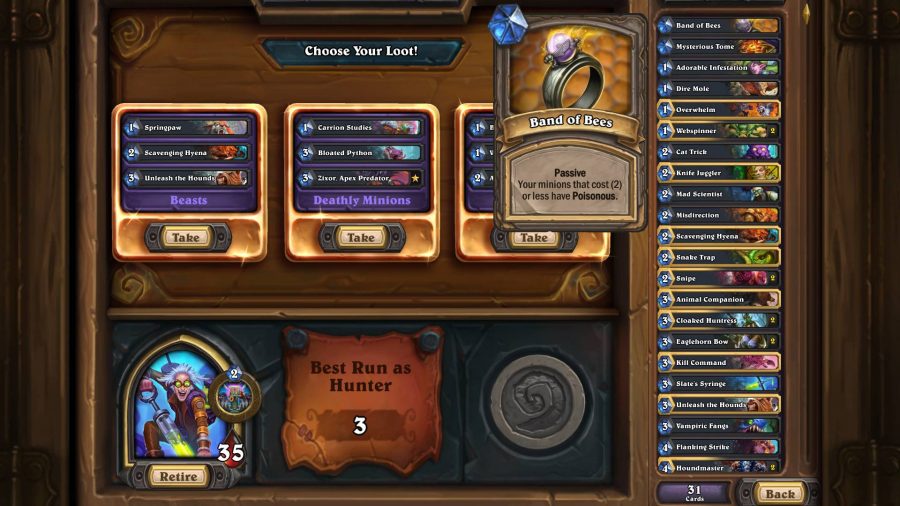 So it feels odd to drop out of Duels mid-run, but unless you do so, said run can potentially last hours. Battlegrounds matches can take around 30 minutes, Arena can take longer but requires less attention, and plain old casual games can last anywhere between five and 30 minutes. Unlike all of these, Duels can really bite into your time, and I’m just not sure I want that from a new mode. And in the end I steamroll everyone with a broken deck gifted to me by blind luck.

I’d prefer a new mode to be less of a commitment, and also to offer something completely different to Hearthstone’s Arena, Solo Adventures, and Tavern Brawls. Right now, Duels feels like a hodgepodge of all Hearthstone’s current modes, presented in a format that lends itself to marathon play. I don’t know about you, but I look to Hearthstone for very different experiences than that.

Hearthstone Duels and Season One – Wizard Duels releases on Beta November 17, with all Hearthstone players able to try out the new mode November 12, and those that pre-purchase a Madness at the Darkmoon Faire bundle will receive early access from October 22 to November 11.