Excepting the odd Arena run, it’s been a fair while since I dipped my toe into Hearthstone, having tired of the predictable plays made by the likes of Dr Boom and Galakrond. I’m not a competitive player, but Hearthstone brings out a rotten side of me that makes me feel truly cheated whenever a Shaman waves his Murloc cards, or a Mage plays a succession of freeze spells. But with its latest expansion, I’m once again in the thrall of Hearthstone’s warm art, adorable animations, and comforting familiarity. It’s good to be back.

There’s a particular sense of homeliness to Scholomance Academy, which invokes the dual nostalgia not only of school or college days, but of a location that’ll be familiar to veteran Warcraft fans. As mentioned in our Hearthstone Scholomance gameplay interview, the Academy is a school of magic that is overturned by the infamous Kel’Thuzad into a school of necromancy, and the setting of a World of Warcraft dungeon. Excitingly, we get to experience the magic school before its descent into depravity at the hands of the mage-turned-lich.

The expansion cards do a great job of creating a mystical atmosphere, with pithy and dynamic dialogue to accompany them as they’re played. It does feel like we’re huddled on the cold stone floor of a classroom in the dusty wings of a crumbling university, flinging cards at each other in a rushed lunchtime game.

I choose to play as Hearthstone’s newest hero, the dual-class Demon Hunter, and put together three decks to try out against opponents. The first makes use of Soul Fragments (cast when drawn, restores two health to your hero) and it’s by far the most successful deck I create – it utilises cards that plant Soul Fragments into the deck, with dropping Soulciologist Malicia (for each soul fragment in your deck, summon a 3/3 Soul with rush) as its signature play. It’s not just reliant on one card, though – this deck has plenty of escape routes, such as Soulshard Lapidary and Shardshatter Mystic. You can check out all the expansion cards here. 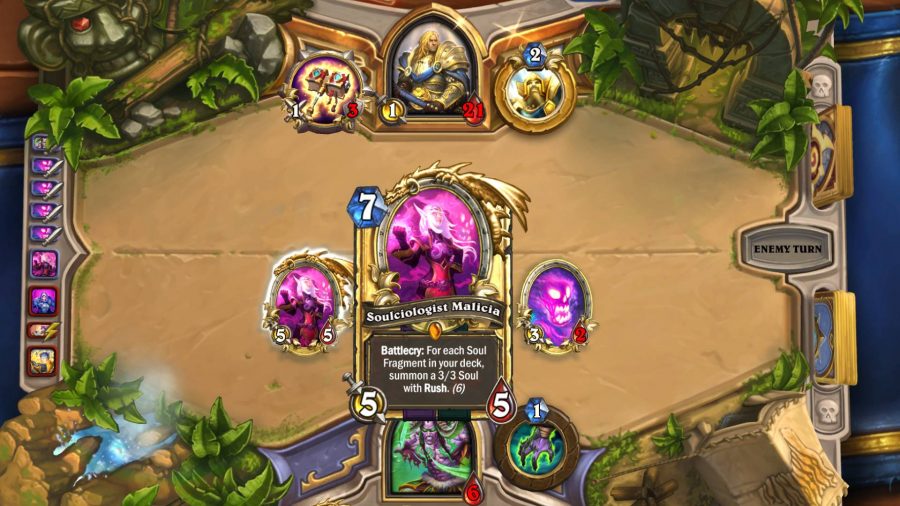 The second deck is far riskier, and goes against all that I believe in in that it does revolve around one card – Blood Herald (whenever a minion dies while this is in your hand, gain +1/+1). After some losses and a bit of tweaking, I stuff the deck full of expendable, cheap demons. It also makes use of the new keyword, Spellburst: ‘with a Spellburst minion or weapon in play, casting a Spell will activate its Spellburst effect.’ Many Spellburst cards are neutral, including Headmaster Kel’Thuzad himself.

The third deck is all about lowering the cost of beefy demons, utilising new outcast cards, and playing one of my favourite neutral cards of the whole expansion: Keymaster Alabaster. Not only does he look like a character from the Discworld’s Unseen University, but his power is: ‘whenever your opponent draws a card, put a copy in your hand that costs one mana’. He only costs seven mana to play, making him seriously deadly, and as a neutral card I’m sure he’ll be popping up in a lot of decks.

It will be really interesting to see the decks and plays that emerge from dual-class cards. Hopefully we’ll see more unpredictable games and a livelier, fresher meta – something that the Demon Hunter class already successfully demonstrated in its launch.

Unfortunately, of course, some things never change, and I do find myself confronting a number of familiar old enemies. These include an aggro Rogue reliant on zero-cost sniping cards and weapon buffs; the late-play-Paladin, the one that absorbs damage for big end-game plays; and the mana-hoarding Druid, who can now play Guardian Runners (summon two beasts that cost five or less and give them rush). You’d better believe this last build only has the following two beasts in their deck: Twilight Runner (whenever this attacks, draw two cards) and Lake Thresher (also damages the minions next to whomever this attacks). By far, though, the most overpowered is the Mage OTK play using the card Mozaki, Master Duelist (after you cast a spell, gain spell damage +1) and I’ll be very surprised if this card isn’t nerfed. Combined with the classic Sorcerer’s Apprentice and small damage spells like Arcane Missiles, I’ve had Mage builds take out my health in one hit. Paired with the same old freeze and delay ploy, there’s not much to be admired – or countered – in such decks.

Decked out: Check out the best card games on PC

But despite the continued presence of the usual suspects, Scholomance Academy encompasses the magic of Hearthstone and I’m really excited to see the direction it’s taking by adding dual-class cards. As with any CCG, balancing is an endless battle, but the latest expansion feels like it’s setting Hearthstone on a path where the competitive spirit is set aside in favour of creating a place that’s just really lovely to be. Hopefully we’ll see that spirit echoed in the decks we see as the new meta settles.