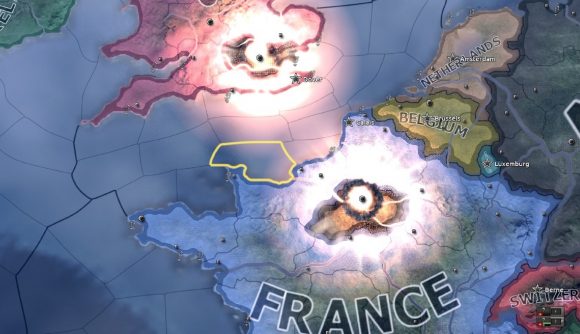 Last year’s release of the No Step Back expansion for Hearts of Iron IV saw players flooding back to the WWII grand strategy game in droves, breaking its record concurrent player count five years after launch. Now, Hearts of Iron’s new game director Peter Nicholson has posted a cautiously ambitious roadmap for the coming year, and his hope is for development to increase in tempo and better incorporate community feedback.

While Nicholson says he shares many of former game director Dan Lind’s ambitions for Hearts of Iron IV, he distinguishes his approach by explaining that he hopes to leave “plenty of space for reactive development,” which he says worked well while he was directing the Imperator: Rome team.

The goal – and Nicholson is careful to point out that a goal is a different thing from a promise – this year is to increase the pace of new releases, and to bring the community on board earlier in the process as patches are going through development. “This also means getting ideas into public view slightly faster, for feedback and conversation,” Nicholson writes. “We’re not exactly sure how this will look yet, but it is likely that there’ll be a reorganisation of the traditional dev-diary schedule into something that feels less like a milestone delivery.”

Instead, Nicholson says the Hearts of Iron IV patch bulletins may begin to include more custodial issues the team is working on – another area where he wants to focus more development energy.

Nicholson identifies three new objectives for the coming year’s development. He would like to see great power diplomacy get some attention, with more diplomatic tools added “without interfering with the overarching global war.” He’d also like to add more options for economic decision-making, although he acknowledges that the economy simulation in Hearts of Iron IV is heavily abstracted. Finally, future updates may add new optional tools for roleplaying to “bring the simulation to life.”

He also says improvements to the battleplanner, advisers and internal politics, and the multiplayer and social layer are all on the corkboard, as well as better distinctions between ideologies.

In all, it sounds like 2022 will be another ambitious year for the Hearts of Iron team. Nicholson’s plans seem to indicate that we’ll be hearing more about what’s in store before long.