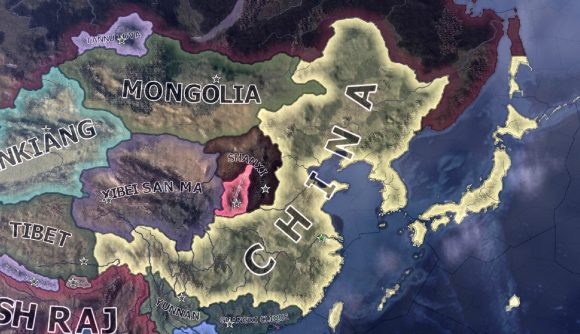 You may not know this, but Hearts of Iron 4 is (probably) the most popular of Paradox’s grand strategy games. There are caveats and exceptions of course – Crusader Kings 3 is a serious contender for that crown given that it’s already sold over a million copies. But, generally speaking, more people play Hearts of Iron 4 more consistently than all of the other games.

Free from the railroading of past iterations, HOI4 provides a sandbox where the second world war can take on many forms, and you as the player have many options available to you in terms of how you leave your mark in this historic conflict. It inspires a community that’s passionate about tactics, the WW2 setting, Hearts of Iron 4 mods, and finding exploits.

Many of the historical strategy games Paradox creates are prone to exploitation in one form or another. In Crusader Kings, marrying the right person at the right time can inherit you half the world in a single stroke, whereas in EU4 there are plenty of ways to inflate your holdings by grokking one mechanic or another. Hearts of Iron 4 is no stranger to these kinds of tactics, and a new one has surfaced that involves naval invasions.

Naval invasions are somewhat key to the whole ‘theme’ of the second world war, and while the AI can sometimes struggle to use the mechanic correctly, players generally don’t have issues. Now it’s gotten to the point where one military genius managed to invade and conquer Japan by… *checks notes* December 1936?

Japan annexed as China in December 1936 [Ironman] from hoi4

As you can see from the above thread on the r/hoi4 subreddit, user CrossMountain’s version of World War 2 took a very drastic turn. Historically Japan didn’t invade China until 1937, and it was unable to fully take over the country before being forced to surrender in 1945.

CrossMountain was playing as China, and managed to exploit the naval invasion mechanics to fully conquer and annex Japan by December 30, 1936. Hearts of Iron 4’s main campaign starts on January 1, 1936.

Related: The best WW2 games and war games on PC

They detail the exact methodology they use in the thread’s first comment, even including some video evidence to prove what they’d done. Reading the post in full, the actual invasion only took 14 in-game days.

This exploit seems to expand on another theory with how to painlessly use the naval invasion mechanic put forward by user Sh4ke_w3ll, which you can read about in this thread:

Naval Invasions : How to do them painlessly. from hoi4

While this is mainly about how to accurately recreate the island-hopping campaigns of the Pacific theatre, even from comments you can get an idea as to how the mechanic can be leveraged for some ‘creative’ outcomes.

Hearts of Iron 4 will be five years old this year, and it has plenty of DLC you should check out, the most recent being the Battle of the Bosporus.