Every Paradox strategy franchise has taken a great leap forward in the last three years, and now, in its fourth instalment, it appears to be Hearts of Iron’s turn. Once again, Paradox are taking a series known for overwhelming detail and complexity and making it more accessible, better-paced, and a whole lot more fun.

Hearts of Iron is the odd-man out for Paradox strategy games. The rest of their games are historical sandboxes where you can radically reshape world history, while Hearts of Iron is fundamentally a wargame. You have a lot of power to reshape World War 2, but ultimately, you still have to fight it.

That narrow focus is refreshing, in a way, after the free-form challenges of Crusader Kings 2 and Europa Universalis 4. In every other Paradox game, you can go with the flow of history, and adapt yourself to changing circumstances. In Hearts of Iron, you have to win or die trying.

The historical problems are immediately recognizable for anyone with a passing interest in World War 2. Britain and France don’t want to fight another war and their political establishments are divided. The Soviet Union is crippled by Stalinism, but has tremendous latent power and imperial designs of its own. The United States is mired in a Depression while a rising Japan threatens its Pacific empire. You have a great deal of power to change the course of history, but it’s not unlimited due to these historical realities.

Political capital is probably the most important currency in Hearts of Iron 4, at least before the war. It pays for every kind of decision, from striking diplomatic bargains to promoting generals to setting national policies. You always have to think hard about what your short term goals are, also about what you’re saving your capital for in the next few years.

It accrues quickly or slowly depending on a variety of factors. The Nazi government, with consolidated one-party rule and genius propagandists and demagogues in every direction, accumulates capital very quickly in the early part of the game. The unpopular, basket-case governments of France’s Third Republic will struggle to accumulate enough capital to make decisive choices before it’s too late.

However, as you deliver on promises and improve your government’s position, more capital flows your way. There is a bit of a snowball-effect when you’re playing well. Likewise, when you are falling short of goals or suffering massive casualties, your capital begins to erode. 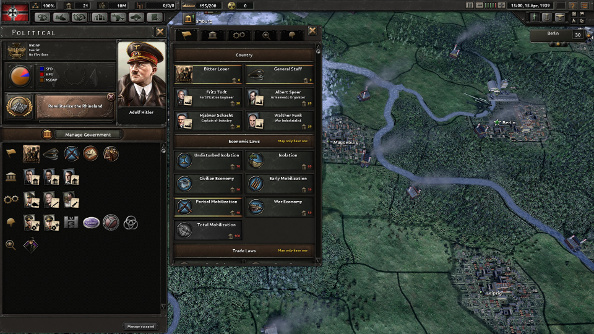 Running out of history

In my session, I played as Germany in 1936. War was inevitable, but I still had a lot of major choices that tie into the great what-ifs of World War 2, like whether Germany should delay the war past 1939, so they can develop the heavy tanks and guns they so desperately needed against the Soviets, or develop the long-range bomber fleet they needed to deal with Britain.

This kind of long-term planning is especially important because, at a certain point, there is no more “long-term”. To paraphrase Donald Rumsfeld, eventually you stop building the army you want because you’ve to go to war with the army you’ve got.

I opted to play very conservatively while I figured out HoI4’s systems. As my first national mission, I decided to expand infrastructure in central Germany, rather than more aggressive missions aimed at regaining the lost territories of 1918. I didn’t want to panic the French and British.

Instead, I just started building civilian factories in Germany’s industrial heartland, which themselves started working on improving the national infrastructure. They also produced valuable consumer goods for international trade. I used to those barter with France and the UK for things like rubber, tungsten, and oil. My first panzer armies were effectively sponsored by the western allies.

Arms production is another interesting feature of Hearts of Iron. It’s a two-step process. First, you have to build the material you need for new units: small arms and artillery for infantry divisions, tanks and armored cars for armored divisions. Only once the stocks of equipment are there can you train a new division. 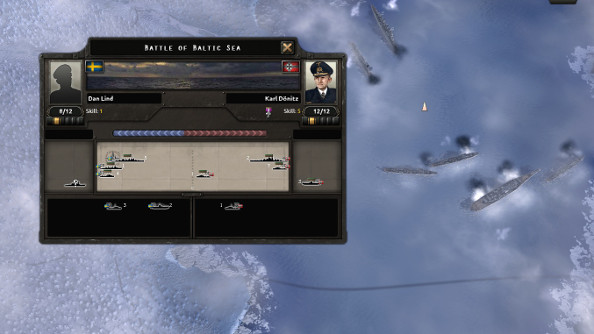 There’s one other wrinkle: the longer you keep a production pipeline operational, the more efficient it becomes. So there’s incentive to keep purchase levels untouched for a long time. If the same 12 factories are tasked to building Panzer IIs, they’re going to get really good at building Panzer IIs.

But that conflicts with the with the need to roll-out new equipment. New equipment requires entirely new production lines, which entails a great deal of inefficiency. In my case, while the Panzer III and Panzer IV might have been the future backbones of the German army, I was cranking out Panzer IIs in droves. So I had to think carefully about when and how I wanted to retire them.

All that equipment is used to build new divisions. You can design divisions according to certain templates. Basically, every division has a certain number of sockets for equipment unit types. So you can build a mechanized division that’s almost entirely comprised of infantry on halftracks supported by towed-artillery, or you can throw some tanks into the mix to make the division a little more general-purpose. Once you’ve established your divisional templates, you can start mass-producing them out of your equipment stocks and national manpower reserve. 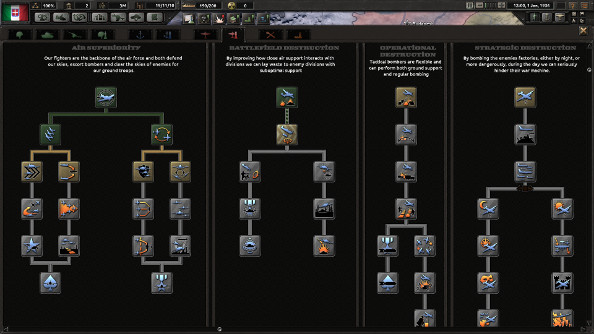 By 1938, my Germany had an awesome war machine in place. I was able to crank out divisions as fast as the men could be trained. My early decisions to over-invest in manufacturing gave me massive military bandwidth. Now it was time to turn all that raw material into usable field armies.

Hearts of Iron makes army management a joy, which is very good news considering how much there is to manage once the battle is joined. This is a game where hundreds of divisions will do battle along a single front, and you can (if you’re crazy) try and micro manage each one. But it’s far easier, and more enjoyable, to give your army some structure and AI management with the tools in Hearts of Iron 4.

Every nation has a stable of officers with various pros and cons. Germany was pretty lucky in that its officers are overwhelmingly first-rate, so I had lots of options for who could lead my army. My best senior commander was Gerd von Rundstedt, so I placed him in charge of 1st Army Group, who would be the largest army involved in the conquest of Poland.

Putting these armies together and assigning them their places and war plans was a breeze thanks to the interface tools in HoI4. Selecting a few stray divisions and then clicking on an army commander portrait assigns them to that army group.

The best part came when it was time to make invasion plans for Poland. Using a color-coded paint brush for each of my armies, I gave them all assignments for what to do when the war began. For Rundstedt’s mammoth 1st Army Group, I drew a bold red line bifurcating Poland at Warsaw and all the way down to the Czechoslovakian border. I drew a shorter blue line behind Rundstedt’s line of advance, to mark where I wanted my special breakthrough panzer army. Finally, with all the pieces in place, I declared war and told all my armies to execute their war plans.

It looked fantastic. Everything about Heart of Iron has a vaguely somber “war room” vibe that really intensifies once combat begins. The panzers streaked out across the cool, desaturated battle map while infantry plodded along behind and aircraft circled overhead. The Poles were overwhelmed on their border, but started to rally at the gates of Warsaw. The front line started to bend backwards as Rundstedt’s drive stalled, while the rest of his army hit their original objectives south and north of the city. 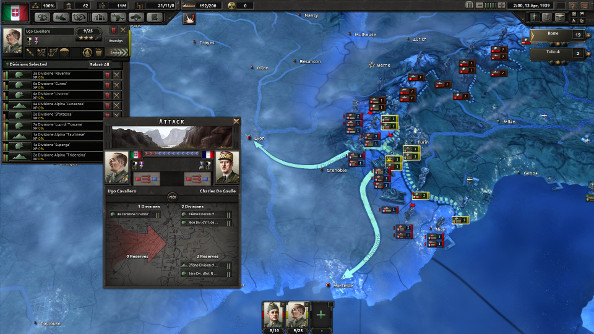 My losses were shockingly high, and both my infantry and air force units were badly depleted from the Battle of Warsaw. Nor was it easy to sense how or where those losses occurred. Hearts of Iron doesn’t deliver a clear picture of who is winning and at what cost. This bit of feedback might be one of the trickiest things that Hearts of Iron 4 needs to get right: all their other games give you battle reports, because that works for medieval and early modern warfare. But it doesn’t work for the constant friction of World War 2’s massive battle fronts.

Still, the Poles were concentrating all their defense around Warsaw, and that was the moment I’d been waiting for. I grabbed my panzer army under Hermann Hoth and drew a line south of the Polish salient, where I wanted them to form up to attack. Then I drew another line that split the Polish lines and connected with German defenses in East Prussia. In short, Hoth would smash through the Polish position at a weak point and drive north to my line in East Prussia, cutting the Poles off from reinforcements.

That started the avalanche as the Polish position collapsed. From there, the German armies fanned out and seized the rest of Poland. I called a peace conference with all the major combatants (just me and Poland, in this case) an annexed Poland all the way up to the Soviet border.

World War 2 was under way. My losses had been shockingly high, and both my infantry and air force units were badly depleted from the Battle of Warsaw. I’d done quite a bit worse than Hitler and Manstein had done in 1939.

But it was a tremendous first act, and, considering I was managing one of the largest economies and complex war machines in the 20th century, a surprisingly elegant and intuitive experience. Hearts of Iron 4 did a great job of making sure I knew what I could do and why I might want to do it, so that I was always free to focus on figuring out exactly what I should do. And that’s exactly what a game like this is all about.

Travel and accommodation were provided by Paradox Interactive.