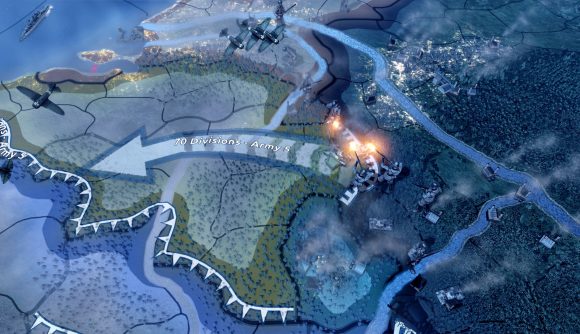 If you’d like to play a WW2 game that lets you play the whole war – and we do mean all of it – then grand strategy game Hearts of Iron IV is what you’re looking for. Paradox’s World War II strategy game is currently featured in its very own bundle at Humble, which puts the price of the Cadet Edition at a single dollar. That’s right – the whole game, for $1.

The Hearts of Iron IV Cadet Edition includes the base game, plus the Poland: United and Ready DLC. There’s also some nice wallpapers and a Paradox forums avatar thrown in for good measure. It normally retails for $39.99 / £34.99, so getting it for a buck is a terrific deal.

If you beat the average donation, which is $9.64 at the time of this writing, you’ll also get three additional DLCs: there’s 2017’s Death or Dishonor, which is a country pack that adds national focus trees for Hungary, Romania, Czechoslovakia, and Yugoslavia; and Together For Victory, which launched in 2016 and adds focus trees for the British Commonwealth nations. You also get the Hearts of Iron IV Radio Pack, which adds 35 new faction-themed songs to the soundtrack, with each major faction (Allies, Axis, and Comintern) getting a historical look for their UI.

The biggest bundle, priced at $18, adds the DLC packs Battle of the Bosporus, Man the Guns, Waking the Tiger, and the Axis Armor Pack. At that level, all you’re missing is 2020’s La Resistance when it comes to major expansions.

By Humble’s tally, that’s a retail value of $127 worth of Hearts of Iron IV. You can pick yours up by heading over to Humble and selecting the specific bundle you’d like. Your purchase will support charity: water, One Tree Planted, and the American Red Cross by default, but you can select other charities if you prefer.

Check out our guide to the best Hearts of Iron IV cheats and console commands if you need a little boost to get going – it’s a complicated game, so give yourself a break.