Hearts of Iron IV is currently Paradox Interactive’s most popular strategy game, and that’s thanks in large part to its vibrant library of Hearts of Iron 4 mods. Kaiserreich is one of the most popular mods around, and I implore you to get it downloaded and installed over the festive break. The sweeping, back-of-the-box feature list includes inventive revisions of some of the game’s problematic core systems, production values you’d expect from a blockbuster war movie, and plenty of alt-history for amateur historians to fantasise over.

Whatever angle you approach it from, Kaiserreich uplifts Hearts of Iron IV from a pretty good WW2 strategy game, to the ultimate strategy sandbox. The premise is simple enough: what if Germany had won the First World War? It’s an easy question to ask, but the mod team has ensured that all the possibilities it throws up feel complex and nuanced, as if it was based on real events.

Britain and France are now beacons of socialism (Google ‘syndicalism’ if you want some fun reading), the Ottoman Empire dominates the Middle East, and a massive German colonial empire spans most of Africa and East Asia. Every part of the globe is recognisable and yet completely alien even to someone with only a passing understanding of mid-20th century geopolitics.

Even though the Hearts of Iron IV dev team has embraced alternate history in recent years when designing new content for the game, these paths always feel at odds with the WW2 game’s historically authentic narrative. 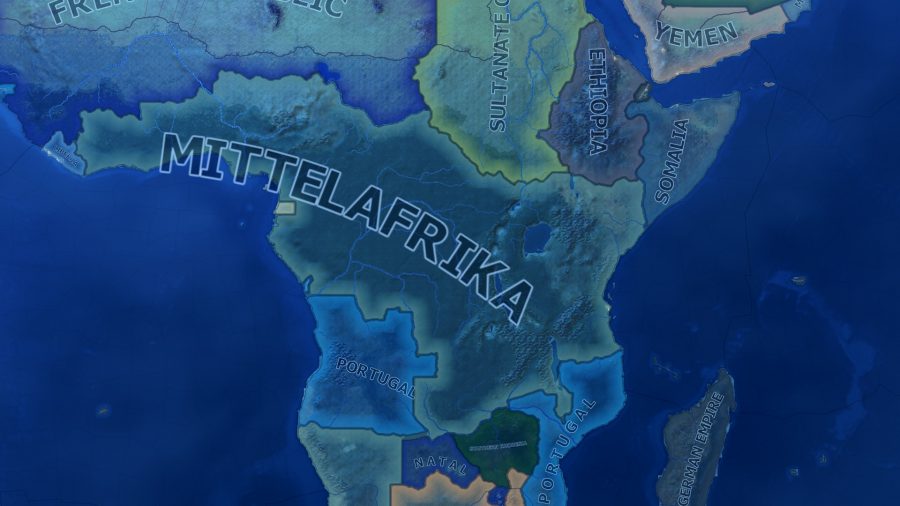 One of the advantages of Kaiserreich is that the departure point from real events is before Heart of Iron IV’s original start date. The world is already free from anything you could easily point to as actual history, and there’s an exciting thrill that comes with venturing into the unknown. Steering a nation you think you know down a wildly different timeline nails that fresh but familiar feeling you get from great game expansions.

Whatever angle you approach it from, Kaiserreich uplifts Hearts of Iron IV from a good WW2 game, to the ultimate strategy sandbox

What’s more, the Kaiserreich team has ensured that there’s a point to its new setting. Every part of the world is embroiled in some kind of local crisis when you start a campaign, and you can immediately feel Kaiserreich’s designers pushing and prodding you towards conflict. Not only does this have the benefit of letting you flex your military might outside of a global war, but it also organically establishes the playing field for whatever version of the Second World War emerges in your game.

It’s like a well-written, perfectly paced war movie, with a slick setup, a rising arc of tension, and an explosive, climactic finale. Like the vanilla game, the ‘big’ war can take on a number of forms depending on who does what early on, so it escapes the formulaic start that most historical war games end up falling into. 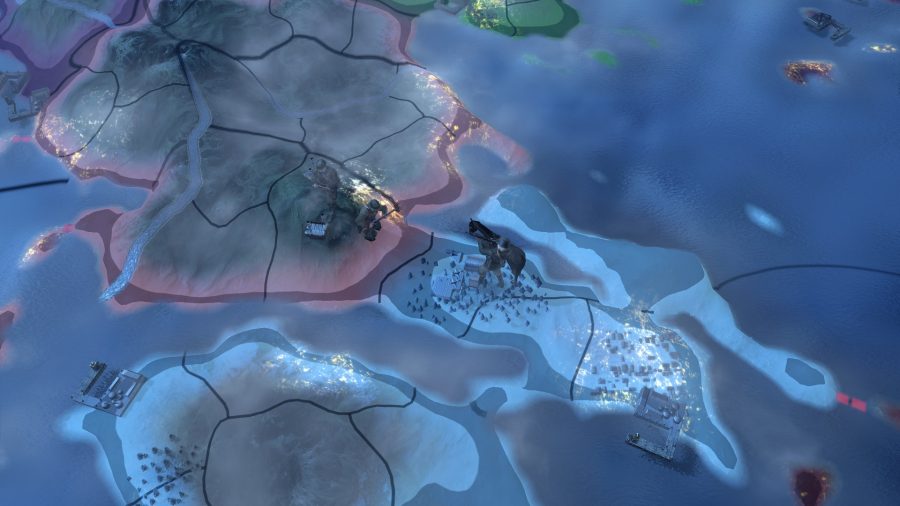 However, Kaiserreich’s best innovation is its new focus trees. In the vanilla game, focus trees pull your focus away from Hearts of Iron IV’s core mechanics by offering up rewards that replace the need to engage with many of the game’s systems in the first place.

Kaiserreich’s power is in offering a familiar, believable setting that’s free from the rigidity of history

As we argue in our Hearts of Iron 5 wishlist, “why would you bother actually building infrastructure, researching tech, or engaging in diplomacy, when you can wait for the relevant focus tree item to do it for you?” Sure, you’re still directing your chosen nation, but you’re guiding it along predetermined tracks rather than forging your own path.

Kaiserreich’s focus trees are a lot more reactive. Entire sections are locked off during timely events like elections or while brokering peace deals. This is great for more thematic sections of the focus tree, because it forces you to start exploring economic or research-boosting paths while critical events pan out. Kaiserreich also swaps out some of the concrete rewards provided by focus trees and replaces them with temporary bonuses, ensuring you’re always in touch with the mechanics that keep Hearts of Iron IV moving. 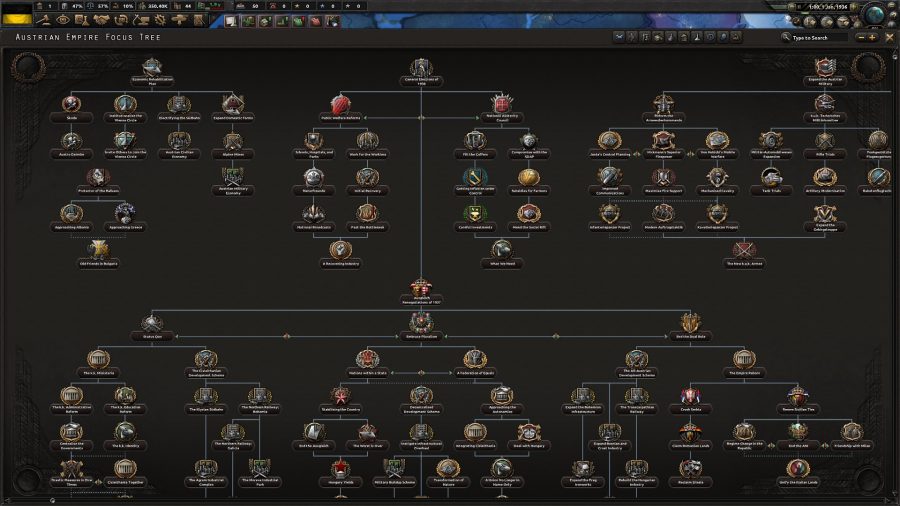 It’s not perfect. The Austria-Hungary tree, for example, features enough tangents and conditional paths that you’ll need to put in some research to reach a specific end point. But this reinforces how intertwined with proactive play Kaiserreich is: you’re not meant to create specific scenarios, you’re meant to be immersed in an alt-history strategy sandbox.

It goes to show how powerful a good story can be, because Kaiserreich doesn’t do much to mess with Hearts of Iron IV’s core mechanics outside of tweaking the focus trees. There are no new or different techs to research; the combat and logistics systems are unchanged; and diplomacy, economics, and espionage function pretty much as they do in the vanilla game.

Not to trivialise the presence of an entirely different world history – the result of thousands of events, decisions, country tags, and more that have gone into making Kaiserreich work so seamlessly – but as noticeable as the setting is, what really stands out about Kaiserreich when you compare it to other overhaul mods, is that it’s so similar to the base game. Road to ‘56 changes pretty much everything about Hearts of Iron IV, while Old World Blues ports the entire game into the Fallout timeline, making wholesale changes to its economic, political, and military frameworks in the process. 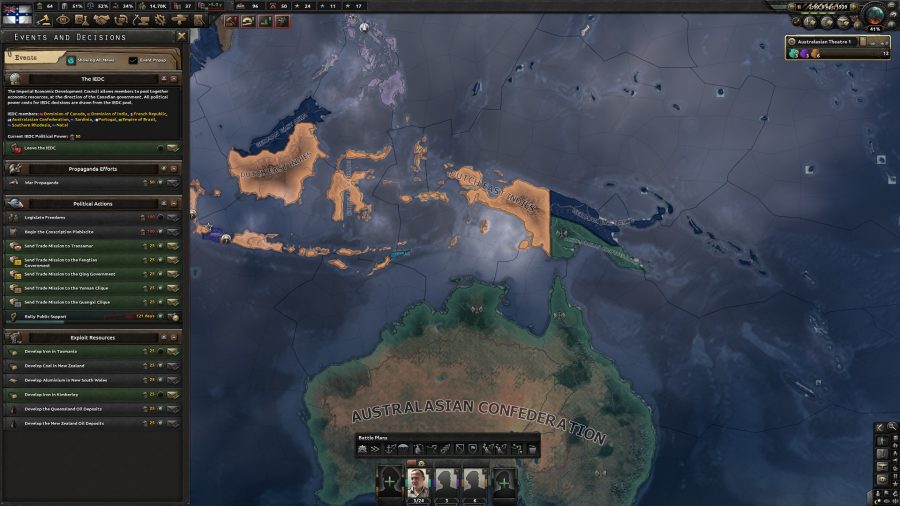 Kaiserreich’s power is in offering a familiar, believable setting that’s free from the rigidity of history. It lets you explore and flex your leadership muscles however you want, and the mod supports those choices in ways the vanilla game sometimes struggles to. If you’re looking for something to make Hearts of Iron IV fun again then Kaiserreich is a great place to start.

Just a quick thing to note before you rush to the Steam Workshop page: at the time of writing, Hearts of Iron 4 Kaiserreich hasn’t been updated in line with the 1.11 ‘Barbarossa’ patch. You’ll need to roll your install version back to the 1.10.8 Collie beta branch to play the mod for now.