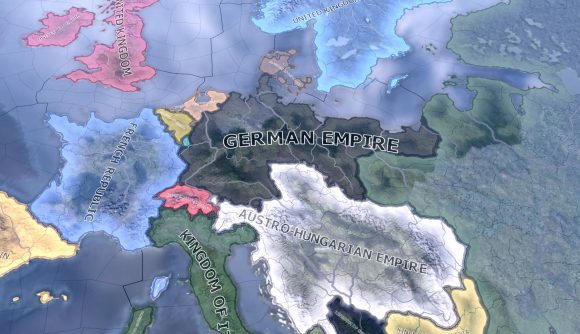 Hearts of Iron IV has an incredibly robust mod scene, probably one of the best among Paradox grand strategy game. HOI4 mods are one of the main reasons that it’s also the most consistently popular out of all of the strategy games Paradox Development Studios produces, even compared to Crusader Kings III.

There are so many mods that you could play repeat games of Hearts of Iron IV and experience a range of different time periods, right through to the post-apocalypse wastes of the Fallout series. There is a rich, complex web of alt-history and historical fantasy mods, but there are so many choices it can be hard to figure out where to start.

Thankfully, user AnonymousFordring from the HOI4 subreddit has come to our rescue. They’ve put together a semi-humorous take on how you can navigate the myriad of key timeline mods that exist for the WW2 war game, starting with The Coming Storm. This is a mod in the early stages that covers the time period of the First World War, from 1905 to 1923. You could also try out The Great War, which is a more focused and popular WW1 mod.

After that, it really depends on who wins your initial game that will determine what mod you try next (although you can always just pick one based on what subject matter you find most interesting).

For example, you would switch to Kaiserreich (the most popular HOI4 conversion mod) if Germany wins the Great War. Or you could try out Kaiserreich Redux, which is a collection of different sub mods that seek to improve the original KR experience.

There are plenty of other alternate history paths that involve further mod recommendations, for example if Russia wins WW1, or if the Fire Nation attacks. There is also the ‘historically accurate’ path that ends up with you either starting again, or embracing your destiny and playing the Warcraft mod. You can also end up in some very different alt-history scenarios, including the post-apocalypse of Fallout via the Old World Blues mod.

This is not the full extent of the popular Hearts of Iron 4 mods – there are others like The Road to 56, and plenty of other Kaiserreich spin-offs. Again this isn’t meant to be a wholly serious.

We know the Hearts of Iron team are gearing up for the next big expansion, which will shake up the Eastern Front. We might hear more about it at PDXCon Remixed in a couple of weeks, but in the meantime you can check out the team’s most recent dev diary that goes into details about changes to combat that are aimed at breaking the current meta in terms of division design.