The Hearts of Iron IV devs continue to show off some of the changes being introduced in the upcoming new expansion and free patch. We know that the theme of both parts will be land warfare and the Eastern Front, and recently the team talked about the changes coming to Poland.

The most recent dev diaries have moved on to look at the Baltic states of Latvia, Lithuania, and Estonia, showing off some of the narrative paths these nations can explore. As Estonia, if you take over the country as the fascist Vaps party, once you’ve solidified your power you can march up through Finland and inspire a similar revolution. From there, Estonia faces a crossroads underpinned by the two halves of the nation’s cultural roots – Scandinavian and Finno-Ugric.

One will let you form a ‘Nordic Empire’ uniting Denmark, Sweden, Norway, and Finland under your rule, while the other pits you directly against the Soviet Union, carving out an Empire inhabited by Finnic peoples living in Russia. Lithuania has several options that let them attempt to either re-form the Polish-Lithuanian Commonwealth with them as the lead partner, or restore the borders of ‘Greater Lithuania’, claiming back territory from Poland, Germany, and the Soviet Union.

Latvia’s options are a bit more tame, but they can become Germany’s lackey and form RK-Ostland, overseeing the Baltic and Belarusian territories on behalf of the Reich. 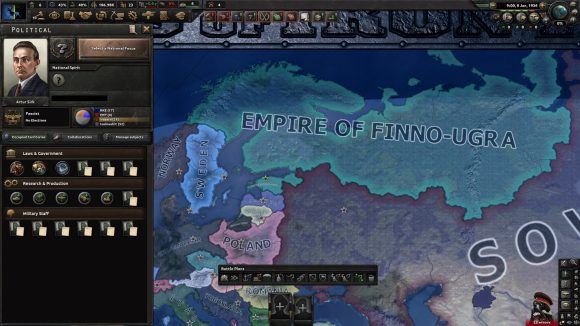 All three Baltic nations will be able to access a shared tree, which will feature a pro-communist path that will let you form the Baltic Socialist Republic. There are also some additional changes being made to Poland’s focus tree, including a new path that lets a monarchist Poland exercise claims over Czechoslovakia.

The developers have teased more Hearts of Iron IV announcements coming at PDXCon Remixed this weekend, so we may hear more about the expansion then (and also Victoria 3, maybe)