As far as I can reasonably ascertain, Heat Signature is a game about a space vigilante who throws wrenches at walls with such force that they ricochet backwards, violently clobbering the space vigilante over the head and knocking them out.

As well as being about knocking yourself out over and over again, Heat Signature is also a stealth game in which you sneak aboard procedurally generated spaceships, docking with them mid-flight using your inordinately cool-looking personal space shuttle. Once you’re on board the ship, the game becomes a Hotline Miami style top-down shooter, with WASD controlling your character’s movements and the mouse cursor being used to aim your weapon. 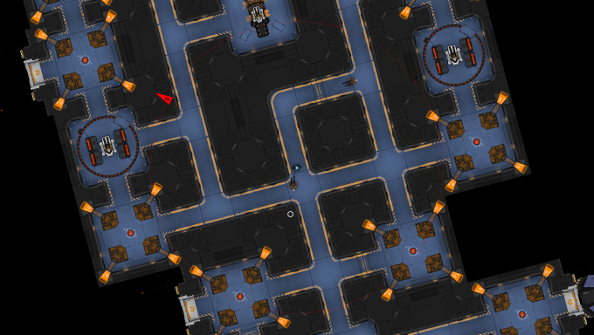 Each ship is different. Some are huge, armed to the space-gills with an array of missile turrets. Others feature corridors locked off behind security doors. Some will have large halls patrolled by wandering guards. Other are teeny, with just a cockpit and a handful of rooms to explore. There are items, weapons and ship upgrades to be found scattered across these ships. Also, because this is a videogame, an unlikely number of ships tend to have exploding fuel barrels stored in really precarious locations.

Your objective on each will either be to assassinate an individual, steal an important thing or to hijack the ship and return it to a base. You do this using whatever method you like, and the outcome of your missions is entirely dependent on how well you can deal with the situations and scenarious that each ship layout presents.

Your own little shuttle craft has no weapons, so docking tends to be the first and most obvious decision you make. From there, you’ll be infiltrating as noisily or quietly as you can manage. Guards can be avoided or smacked to death. The AI will respond to the sound of gunfire, sprinting to investigate its origin, which has the welcome side-effect of allowing you to lure guards into traps. If you’re caught, you’ll be dragged to the nearest airlock and jettisoned back out into space, at which point you can remotely control your shuttle, using it to catch up to and retrieve your floating body before you run out of oxygen.

You get chucked out of airlocks a lot in Heat Signature. Far more often than a space vigilante of any decent moral standing should expect. You start to get the feeling that maybe you’re the bad guy in all of this. 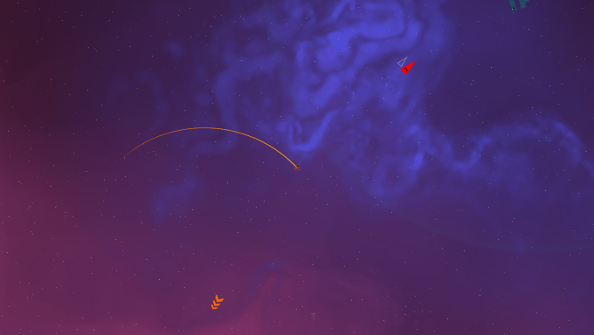 Commandeering different parts of the enemy ship allows you to do several different things. You can hijack a turret and fire missiles at other ships. You can hijack the captain’s chair and take control of the entire ship. Play stealthily enough by leaving the missile operators alone in their chairs and the captain’s seat can even order missile strikes. Presumably these strikes are carried out by confused yet dutiful subordinates, who might briefly speculate as to why their captain has turned trigger happy.

There’s a modular destruction system that lets you destroy ships room by room, causing any connected rooms to suddenly depressurise and blast their contents into the inky void. You’ll notice this very quickly if you start playing about with missiles, as any ships you attack will become aggressive and return fire.

Depending on the situation you can use this to your advantage. Rather than tracking down your assassination target on board a ship, you could alternatively kill the ship’s captain, set the autopilot to fly the craft deep into enemy territory, evacuate to your shuttle en route and allow the opposing faction to attack the wayward ship on sight, taking your target with it. 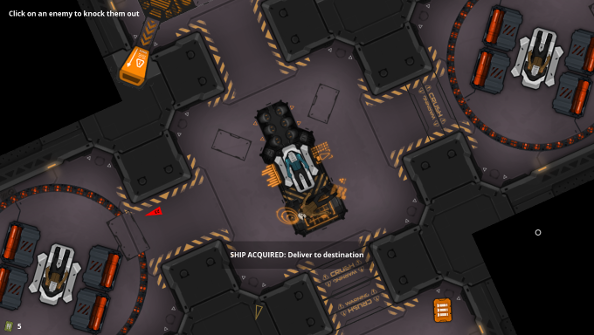 In another situation your target might be behind a locked door. If the door is of too high a level to hack, and if you don’t have a keycard, and if you can’t access a security terminal to reduce its security level, if all of these things cannot be done, you can use explosions. Explode a nearby room with space dynamite to fling the target into the icy grip of the infinite cosmos. Explode a new route through the ship that bypasses the locked doors. Capture a nearby, well-armed ship and use it to explode the target’s ship to bits. Explosions are the cause of, and just one solution to, many of Heat Signature’s problems.

Stay alive for long enough and you’ll find yourself more capable of carrying out missions successfully. Keycards can be picked up that permanently grant access to security doors of a given faction. You’ll find increasingly useful procedurally generated weapons as you play, ones that produce less noise and allow for more stealthy incursions. You’ll probably get a little better at not knocking yourself out with your own wrench.

Die and you’ll lose all of this nice stuff, but the galaxy map will remain as it was and you’ll be given control of a new character. Your impact on the galaxy, in this early version of the game, is entirely to do with faction-controlled trade routes. Dozens of stations are spread across the map and linked by glowing trade routes that can be broken by carrying out a mission on that route. Assassinate a VIP and the faction in charge of that route will abandon it. Steal an important bit of cargo and, again, the easily startled faction will stop trading between those two stations. Cut a station off from all of its trade routes and you’ll then be able to capture that station for the faction of your choosing. 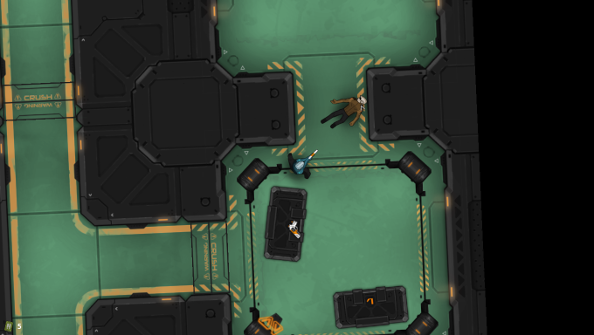 Pleasingly, this strategic, route-capturing meta-game doesn’t exist on a separate screen. At any time you can use the mousewheel to zoom all the way out and view the map on a galactic scale, seamlessly zooming from a viewpoint at which you can see wrenches bouncing off walls, to a vantage point from which you can appraise entire networks of space stations connected across vast distances, watching them floating like grains of sand in the game’s colourful and somehow tasty looking nebulae.

Heat Signature is really cool. It’s not finished. It’s probably not even nearly finished. While the more personal and zoomed-in aspects of the game — the sneaking around spaceships and hitting things and falling into space through holes in walls that weren’t there a moment ago — appear to be basically complete, the broader and zoomed-out strategy elements of warring factions and capturing stations are still vague and purposeless. Because, well, it’s not finished.

Developer Tom Francis has plans in place for making space better. You’ll soon be able to align with factions, earn money for carrying out missions and eventually pursue your character’s personal goals of wealth, fame and wrench-dodging. Stations are to become little recreational hubs to which your character may one day retire. The universe will gradually make more sense and become a world in which your impact becomes more meaningful than simply changing the colours of the lines between stations and occasionally knocking yourself unconscious.

If you’re interested in the development of Heat Signature, take a look at developerTom’s blog where you’ll find ongoing updates and dev videos.