I’m aboard an enemy ship filled with rotating turrets and armoured guards, hurtling through space towards a corporation’s outpost. If it reaches its destination I’ll be captured. But my biggest problem is that there are only five seconds left on the clock. My objective is a wash – there’s no way I will steal the prototype in time – and, on top of all that, my escape pod is more than five seconds away. Way more.

On the other side of this ship sits the pilot at the controls. If I can reach him and take him down, the ship will stall indefinitely. Unfortunately, he’s as far away as my pod. I’m screwed.

Except I’m not. In a moment of desperation, I run into the adjacent room, pause time, and target a guard with my kinetic facebreaker. Smack! He falls to the floor, I scoop up his gun, take aim at the window, and fire. The pressure sucks me into space in a fraction of a second, just in time for the ship to dock at the station. Floating through the black, I take control of my pod remotely and send it speeding for me before I run out of oxygen. Scooping myself up, I know I’ve failed my mission, but at least I’m alive and ready for the next one. 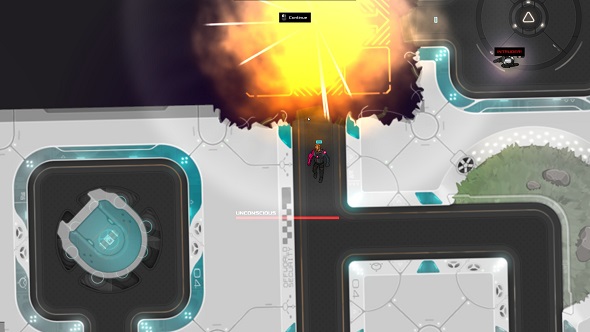 Heat Signature, the next game from Gunpoint creator Tom Francis and his team, is a spacefaring anecdote generator. It smoothly switches between hyper-fast action and methodical stealth, giving you various tools with which you can pull off your heists, rescue missions, assassinations, and captures. In one moment it is an intergalactic Hotline Miami and in the next it is a top-down Deus Ex. It retains the slapstick comedy of Gunpoint – its violence immediate, sudden, cartoonish, and usually accompanied by a satisfying sound effect – as well as the sarcastic, humorous writing, but it’s a completely different experience.

Where every pixel in Gunpoint was handcrafted, Heat Signature hands a lot of power over to algorithms. As the game is procedurally generated, how much fun you have with each mission is at the mercy of these algorithms: what tools you find, what the layout of the ships is like, time limits, and how well-equipped your foes are. 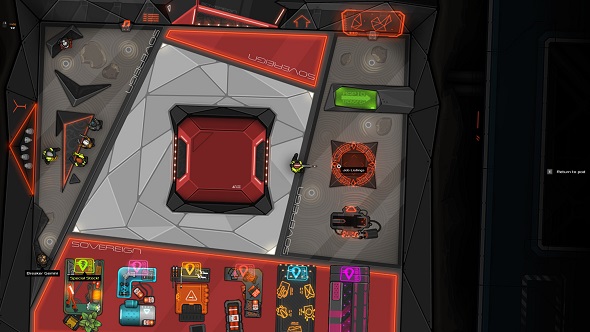 You take on missions from a hub – selecting them based on difficulty, guard presence, objectives, and their monetary reward – with each one you complete filling up a progress bar. Once it is filled, you can liberate a new outpost, linking them together like a constellation on a zoomed-out galaxy map. Structurally, it is a bit like a Ubisoft game, where you are always working towards claiming territory and the rewards that go along with doing so: perhaps new items for your hub’s shops, or more starting funds for new characters. Oh yeah, and when characters die, they’re gone for good.

The on-ship sections are incredible, but the glue that sticks it all together is less successful. Flying to an enemy ship is just a case of holding down the left mouse button until you are there. Actually docking your ship takes a little concentration – avoiding targeting lights and trying to carefully line up with an airlock, occasionally bouncing off the enemy ship’s hull with a comedic thud – but the meat of the game happens when you are onboard.

The best way to learn how to make the most of the game’s tools is to play its Defector missions, which unlock as you secure each outpost. These place you in the shoes of a character with two tools, one on the left mouse button and one on the right. You then have to navigate a huge ship and complete an objective with your limited toolset, procuring extra stuff while there. It lets you get to grips with the various ways you can use the gadgets. 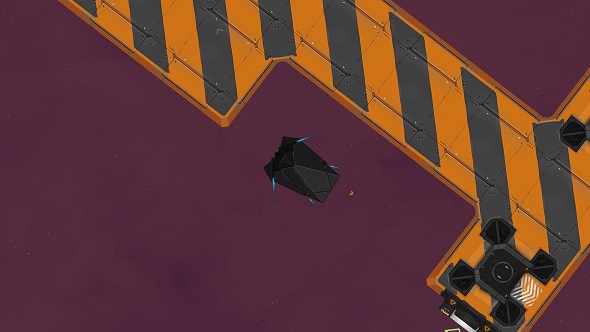 In one Defector mission, I am armed with a shotgun and a Slipstream device that slows down time – it is like a top-down Max Payne. In another, I have a stealth device and a silenced pistol that makes it more like a retro James Bond. Heat Signature’s gadgets are inventive, and the game’s mission variety forces you to come up with new strategies, and new ways to use them.

Some missions require you to not be seen and leave every guard untouched, while others want you to leave no living witnesses. In the former, you have to come up with clever ways to get through locked doors, picking a guard’s pocket or using a long-range key cloner to swipe access away. In the latter, you sometimes have to come up with solutions to make people dead. One of my characters was equipped with a non-lethal melee weapon, so I just stacked the unconscious bodies up in a room and shot a window out, firing them into space. I repeated this trick but instead used an explosive to blow an entire square out of the ship. The temptation to get bigger and bolder with your experiments increases as you progress. One weapon I found was called the Everything Gun – it scoops up everything in range and fires it all out at once, sending guns and other items scattering down a corridor.

Unfortunately, Heat Signature’s structure lets it down somewhat. It becomes a repetitive grind, broken up by the occasional amazing moment. The procedural generation makes it feel special, randomly creating an environment for these unique anecdotes, but it is a double-edged sword as there are a multitude of uneventful missions in-between. Still, it all feels worth it for those moments when there are a few seconds left on the clock and you are forced to take desperate action.