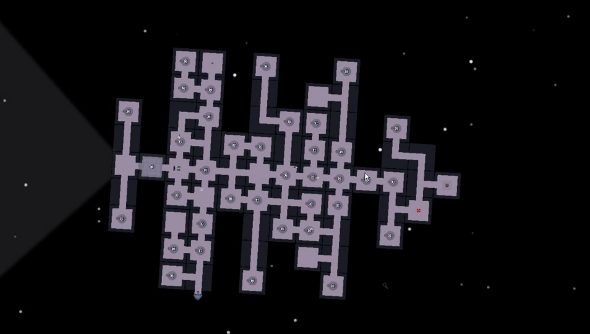 There’s a lot more to Heat Signature than being an intergalactic ne’er-do-well though, so I pestered Francis with questions to get the skinny on this space game.

Roguelikes are very much in vogue these days, and while this unfortunately means that some folk are growing sick of them, it also means that the subgenre is expanding, going to new places and doing new things. Heat Signature has its fair share of roguelike properties, but despite being set in space, it’s a very different animal from FTL or Teleglitch.

The galaxy is a big open space, absent a narrative beyond what’s constructed by the player and without a set number of levels or missions. It’s a procedural galaxy filled with random ships, where death is permanent and players can chart their own course. “[I]t’s a vast galaxy that lets you go anywhere and play as long as you want to – or as long as you survive,” says Francis.

At the start of a life, a class must be picked. And it’s not a life in a video game sense, where you die and then restart, either from the checkpoint or from the beginning of the game. Each life is its own experience, a different person doing different things.

That’s where the class system – so far thief and assassin classes have been shown off – comes in, inspiring new approaches for different lives. But Francis is still working it out. “I’m not 100% committed to this exact class system, but I do want to avoid Elder Scrolls Master Wizard Thief Hero Fighter King Syndrome, where you do all the thieves guild quests because you’re a thief, and then you might as well become head of the fighter’s guild and the grand wizard of the mages guild and saviour of the world. You could start a new character for each of these things, but by saying ‘It’s fine, any character can do it’ the game is also saying ‘It’s fine, these aren’t really feats that take a true warrior or a true mage, they’re just collect-em-all achievements anyone can do.’”

Francis wants to make it feel like only a world-class thief or master assassin could pull off their most important respective missions, like only a character defined by their path could succeed. And that means he can give them specific bonuses and abilities, too. An assassin, for instance, could start with a silenced pistol, all the better for putting bullets in skulls while skulking around a well-guarded vessel. Or the hijacker – which hasn’t been introduced yet – could control ships remotely. He has some ideas for “positive” classes as well, where the job isn’t theft or murder. There’s the interceptor, who can neutralise pirates and aggressive ships; the tech, who flies around saving the day by fixing up ships in distress; and the exfiltrator, a class dedicated to extracting spies or prisoners.

In the video (look up), Francis dabbles in some stealth as he attempts to pilfer the possessions or various spacefarers. Mainly it was sticking to walls and keeping an eye on guard patrols. He’s going to be keeping it simple, but he does want to expand the existing tools and threats.

“[G]unshots will have a sound radius, and only guards in earshot will come running,” he says. “That’ll vary with the randomised weapons you find, and quieter weapons might take rarer ammo types. I’ll let you pick up and move bodies, and have guards run to them when they see them, try to revive them if they’re only unconscious, then patrol the area they were found. It’ll really be about ‘If I can’t slip past these guys, when and where can I take them out so that the others don’t hear or see anything suspicious?’”

Space is a dangerous place. You don’t go up there expecting a lovely time with no crises. There’s nothing comforting about that massive black void. That’s why weapons come in handy. Larger ships will have armoury rooms that can be cleaned out, and the guns will come with their own specs in terms of rate of fire, spread, accuracy and other elements that set them apart from each other.

Of course, firing a pistol at a ship probably won’t do much good. Players will get a pod that facilitates their journey across the stars while allowing them to dock with other ships, but a wee pod isn’t much of a match for a ship with very big, very threatening guns. There are some upgrades, thankfully, like boosts to the thrusters that make escape easier. Francis wants expand that into a slot system, so a loadout can be chosen, with things like missile launchers and afterburners being plugged in.

Speaking of ships, the vessels flying around the galaxy alongside the player’s pod are randomised creations, not just in terms of shape, but corridor layout, where the weapons are and how many of them there are, and how many guards patrol them. And they can be properly hijacked, not just broken into.

Francis likens it to Hitman. At the moment, ships don’t go around attacking other vessels, so hijacked ships can provide a sanctuary. It’s like being disguised. And like Hitman, the obliviousness of the enemy can be taken advantage of. A hijacked ship’s weapons can be turned on another vessel. Then you could just bugger off back to your pod and watch both ships fight each other from a safe distance while twirling your moustache or laughing maniacally. Factions and pirates will mix this up a bit when they are implemented, but it will still work between ships in the same faction.

When ships do go at it, it’s not a matter of them firing at each other until they explode into nothing but space dust. They break up into parts, depending on where the shots are striking. This opens up all sorts of appropriately sneaky tactics.

“[S]hips are just the sum of their parts, so it’s very possible to blow off all a ship’s turrets, or take out its cockpit,” says Francis. “The random design of these ships plays into that nicely – sometimes I’ll find one with a really narrow middle, and realise “Wait, all its guns are in the rear half. If I just blow it in half…’

“It’s really funny to trick two AI ships into fighting each other, then watch the moment when one of them realises all of its guns were on the wing that just got blown off, and suddenly all its thrusters fire in the opposite direction as it desperately tries to get out of combat, and the other ship chases it down.”

While Gunpoint and Heat Signature are both distinct, obviously different games, they both involve exploiting systems and being generally a bit naughty. Floating Point, Francis’ free, rather serene game about swinging – nothing to do with sexy parties, sorry – doesn’t appear to share the other two’s criminal proclivities, but you never know. I wondered if Francis was actually planning a heist, or if being naughty was simply more fun – which we all know it probably is.

“Let’s say in Floating Point you’re stealing those score bars. I think if all my games were about just gunning people down, with no option for avoidance, I probably wouldn’t get a question about that. Outright slaughter is the default in games, so ‘stealth’ is a genre.”

And he’s right. Even in jest, I’ve never asked a shooter developer if they think killing hundreds of people is a bit of a lark. It’s bog standard, utterly mundane.

“The reason I mostly work in it is that I like games about excitingly tense situations, ones with real danger, but I don’t like just slaughtering people,” he continues. “It makes people feel unimportant, which makes me less engaged with the game because that’s so far from life. If a hostile person is a terrifying, instantly-lethal thing, and hiding in a corner as they walk towards you is a nail-biting experience, that feels more authentic to the danger of the situation it’s representing, which in turn makes it more fun to dip into from our relatively safe lives.” 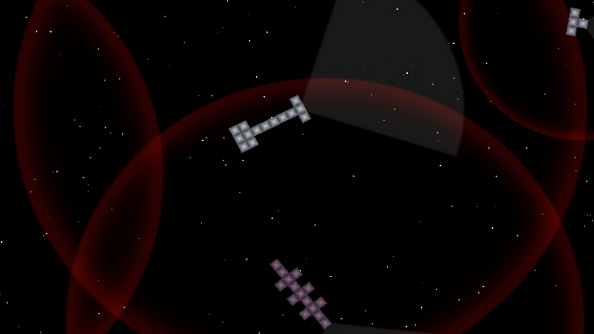 Francis’ design philosophy is, he hopes, respecting the player’s time and letting them dictate their own experience. “Never depriving them of control if their character would have it, never forcing them to repeat themselves, and never saying ‘Leaving the mission area! Get back to where the story expects you to be or we won’t know how to handle it, and we’ll take that out on you by claiming you failed the mission and making you restart it! We’re awful! Just terrible pricks!’”

Gunpoint achieved this. Not just through the experimental glee that every mission could be approached with or the choices player could make between those missions, but through the editor that allowed them to make their own challenges and security-riddled office buildings. Heat Signature won’t have the latter, but with a procedurally generated galaxy and all those random ships, it doesn’t seem like it will matter. Francis says he’s going put data in modifiable text files though, so tinkerers shouldn’t be put off.

Keep an eye on Tom Francis’ website for dev walkthroughs, updates and all that other lovely stuff.