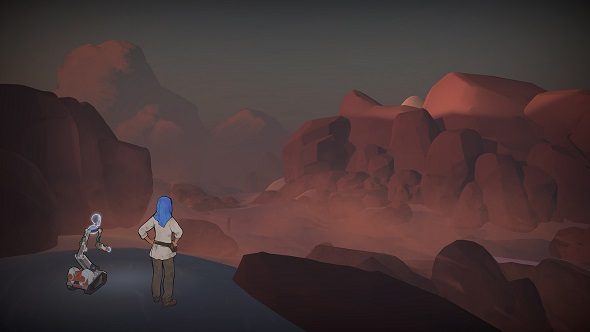 We’ve got boots on the ground at GDC, and PCGamesN’s editorial director, Joel, got his hands on Heaven’s Vault, the latest game from 80 Days developers Inkle. He says it’s probably not what you’re expecting from the studio.

Apparently, it’s a blend of Telltale-style storytelling, The Witness-style puzzles, and Journey’s meditative exploration, though it still manages to feel distinct.

“The Nebula. A network of rivers, flowing from one moon to the next, carrying air and water between scattered clusters of civilisation,” says the official blurb, explaining the landscape you’ll be exploring. “No one knows how the Nebula was formed. No one knows how it will end.”

You take on the role of Aliya “El” Elasra and her robot assistant Six as they try to unravel the mysteries at the heart of this ancient world. Being an Inkle game, expect the writing to be industry-best.

Joel describes it as an open-world split into explorable chunks, in which you will decipher inscriptions, delve into ruins, and more. It’s all hand-drawn – the backgrounds are rendered in 3D, while the characters are 2D. The build Joel played used point and click movement, but that’s apparently being replaced with a free movement system.

“The section I played was set on a desert expanse, and I took Aliya (and robo-pal Six) across dunes attempting to decipher a bunch of ancient pillars leading up to a temple,” says Joel. “All of these are written in a completely invented ‘ancient’ language, but there’s a logic that allows you to (maybe) work out what they each say. However, the game doesn’t tell you if your solutions are right or wrong – at least not immediately.

“There’s a multitude of dialogue options, all of which I was told will contribute to how things pan out over the long term, and little in the way of linearity in general: you can choose where to explore, in what order, how much detail you want to uncover, etc. It’s got the feel of a short, narrative-led experience, but I was told it’ll likely be in the 15-20 hour range – quite a departure from Inkle’s previous work.”

Joel says it’s hard to explain because it’s so different from everything else, but it’s just as promising as it is difficult to convey. Basically, keep your eye on this one, it could be special.