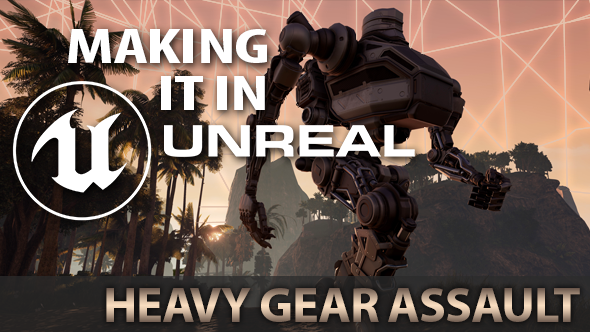 An alien sun bakes the steel plates of the Gears – the player-controlled bipedal mechs who clutch oversized guns in fake fingers. Like hot cars, they’d burn any hand that touched them. Not that you’d get close enough to touch without facing far worse dangers. Laser weapons flare throughout the battlefield in greens and reds, and you’d be liable to lose your head if you so much as stepped onto it.

That’s not such a concern for the Gears – although, as Stompybot CEO and Heavy Gear Assault designer Vince McMullin explains, a head would be missed.

“Heads in general contain primary optics, communications, and radar,” he says. “So getting your ‘head blown off’ means a loss of radar, and any sensor sharing capability with your team.”

The ability to take apart an exosuit – either with a hail of bullets or in a customisation menu – is a “hallmark feature of any mech game” – and Heavy Gear Assault is, loudly and proudly, one of those. 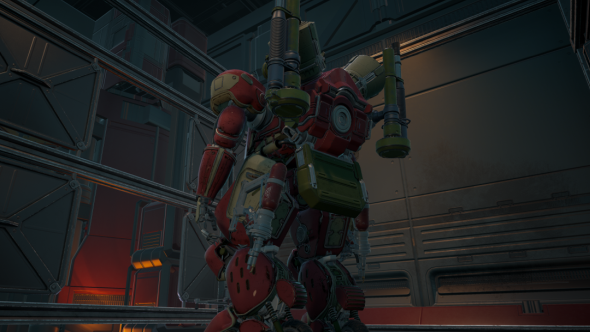 Stompybot have overwritten chunks of Unreal Engine 4’s framework logic – the same one that allows for rapid development – in order to support their very particular vision for fighting machines.

Specifically, Stompybot have modified Unreal Engine 4’s FSkeletalMeshMerge utility. That’s a tool for merging a list of skeletal meshes – i.e. the collection of polygons that defines the shape and movement of a character – into a single mesh.

“The majority of this work required the development of a database system to read in the location of our [armour] plates from a data table,” says McMullin. “FSkeletalMeshMerge has been around since Unreal Engine 3 and we’ve only seen a few games that we know of attempt to use the system the way we are.”

Now, every Gear in the game has an internal mesh-based skeleton, upon which all of their armour sits. This custom system lets players collect, replace and repair plates on their Gears, in addition to fiddling with weapons and equipment.

Since most Gears in the game share a common skeleton, Stompybot also have the ability to swap different plates between them.

“The Heavy Gear lore fits perfectly into this technological development because all Gears are based on the Hunter – the first Heavy Gear,” McMullin notes.

“This is something we believe will be common in futuristic mech warfare,” he adds – though the implications of that disturbing thought are beyond the purview of this humble article.

Drawing up a Blueprint 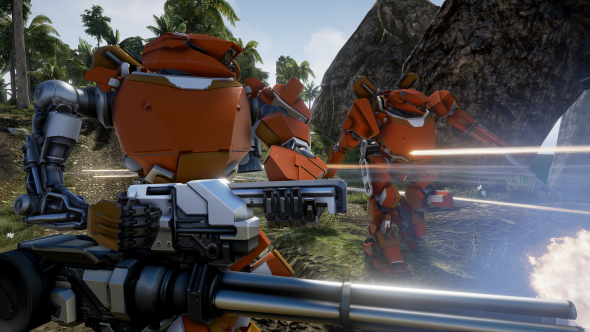 Heavy Gear Assault’s original build – its MK1, if you will – was built almost entirely in Unreal 4’s Blueprint – a node-based visual scripting system accessible to non-programmers.

Since production started in earnest, however, the team have moved over most lower-level game code to C++ and made substantial gains in optimisation and performance. Yet Blueprints remain in the version of the game Early Access pilots are playing today.

“Current Blueprints are for user-facing elements like UI or animation where we need to reference specific content, like a texture, material or mesh,” says McMullin. “Blueprint is often used by our designers for rapid prototyping.” 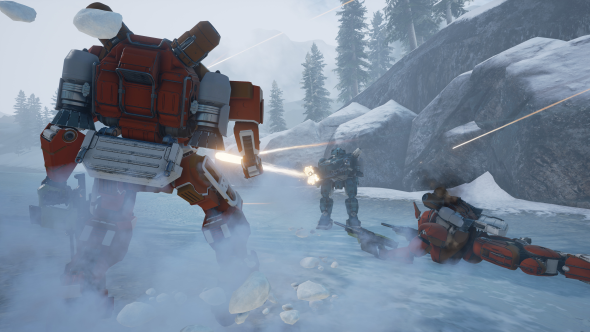 The process of designing a map for Heavy Gear Assault actually begins outside the engine, in World Machine – a powerful procedural tool for creating 3D terrain that mimics real-world geological effects.

“This allows the boundary of my map to look like a believable and real location within Terra Nova,” explains McMullin.

From there, the designer draws the layout Gear pilots will play upon. Heavy Gear’s maps feature plenty of open ground, so elevation is particularly important.

“Peaks create lookouts where players can survey the map or attack from a distance,” McMullin expands.

In fact, lots of the terrain in Heavy Gear performs a practical function. Valleys encourage players to gather and fight, while impassable walls and mountains block line of sight or create choke points. 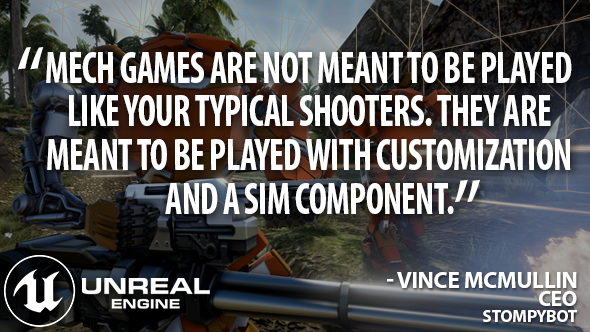 “Each climate has its own unique hazards within the world of Terra Nova, as well,” points out McMullin. “The sandstorms of San Lopez can reduce the player’s visibility and the white sand pits can corrode Gear armor. The ocean players must cross between islands in Port Oasis can slow players down or shut down their engines. All these hazards are considered while I’m designing.”

Once he’s pleased with his plans, McMullin moulds the procedural landscape to reflect them – tweaking the result over many iterations in response to feedback from other developers and Heavy Gear’s Early Access community. He stops only when the map is fun to navigate and battle in.

All of which might be difficult to appreciate in the heat of battle, when the red and green lasers zip this way and that. But these are the modular pieces which, much like the Gears themselves, combine into a greater whole.

“We’ve worked hard to build an amazing piece of technology built on top of the best game engine technology we could license,” says McMullin. ““As a small development team we’ve beaten the odds a few times.”

In this sponsored series, we’re looking at how game developers are taking advantage of Unreal Engine 4 to create a new generation of PC games. With thanks to Epic Games and Stompybot.