On the desert belt of distant Terra Nova, pilots are clambering into 12-foot metal exosuits to settle their differences. Some of the mechs are angular, their machinery exposed to the elements, while others are bulbous and segmented like wasps. But they’re all designed for the high-stakes shootouts of competitive Gear Dueling.

Outside the arena, pilots are managing corporate sponsors, hiring support staff, and tweaking the decals and damage-dealing properties of their Gears.

“Whether you eviscerate your enemy with relentless firepower or put a precision VibroKatana blade in their back, be sure to do it with style,” is the slightly sinister suggestion from developers MekTek. “After all, that’s what your fans paid to see.”

Although the Heavy Gear universe was dreamed up 20 years ago as a tabletop wargame, e-sports is built into its lore. MekTek are taking advantage of that prescience with Heavy Gear Assault. 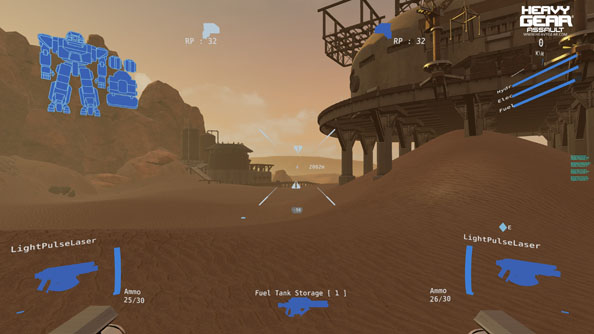 You might remember Heavy Gear as the robo-bashing series Activision published in the ‘90s after losing the rights to MechWarrior. That makes it the perfect exosuit for MekTek – who produced a number of community expansions for MechWarrior 4 as a mod group, supporting their servers for eight years before incorporating as a company.

The developers were given access to the new Unreal Engine in 2013 – “about the time it started to be a thing”.

“We were lucky enough to be selected because of our work with the MechWarrior 4 franchise,” says Stompy Bot Productions vice president John Nguyen. “They said, ‘Hey, they’re making a mech game, let’s give them Unreal 4.’”

Two years of full production and a failed Kickstarter later, MekTek have adopted a founder’s pack system consciously similar to that of Star Citizen.

“Kickstarter didn’t really work out for us. So we killed it, and we continued with our own internal crowdfunding,” explains Nguyen. “We got to this point because of our alphas and early backers.” 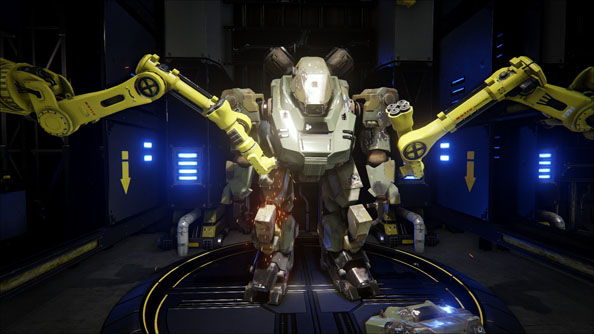 The game they’ve made isn’t so much a mech sim as a person-in-a-mech sim. It’s a subtle distinction that becomes less so when a player pops the cockpit of their suit mid-match and climbs out.

“When you’re outside you’re horribly vulnerable,” says Nguyen. “[Players] can come along out of nowhere and you can get killed, as a person.”

You can hop out of your Gear at any stage – and some objectives, lacking hacking a computer, will require you to do so. Given that MekTek are developing environmental hazards – the alpha map I see is consumed by a sandstorm – it’s far wiser to stay inside when possible.

The Gears aren’t lumbering vehicles, but agile suits capable of running, crawling and bunnyhopping. But they’re vulnerable, too – subject to damage modelling that can see your machine chipped away over the course of a match.

The granular level of destruction allows you to blow off limbs, down to individual fingers, and guns with them. During my demo, another player shot our mech’s legs to pieces, leaving us immobile – a death sentence. 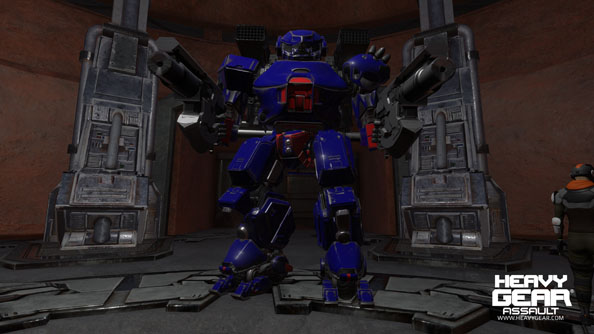 “In a persistent universe, those things can be re-armoured and repaired,” Nguyen points out. “Or a part can need to be replaced entirely. That’s going to lead to one of the future modules, which is the Black Market.”

In the finished game, players will be able to spend real money on ‘blueprints’ – crafting recipes that can be sold on for in-game cash in a player-to-player market. But the most recent release is the Gear Bay module – a comprehensive mech customisation tool.

Heads and torsos can be swapped out, and MekTek are making full use of material shading in Unreal Engine 4 – enabling Gears in titanium, fiberglass, car paint, carbon fiber, stainless steel and, perhaps least likely, nylon. There are plans for detailed stat-tweaking later in development – but with Mech schemes exportable as clan colours, Nguyen expects the cosmetic changes to be almost as important.

“We want to go with an e-sport level of competition with this,” he says. “Customisation is very important for someone who wants to compete on that particular level. We wanna bring the guy’s play level, the guy’s playing style, what kind of weapons he likes, put that together in a package and create a persona for each player as they’re competing in the global standings and the ladders. 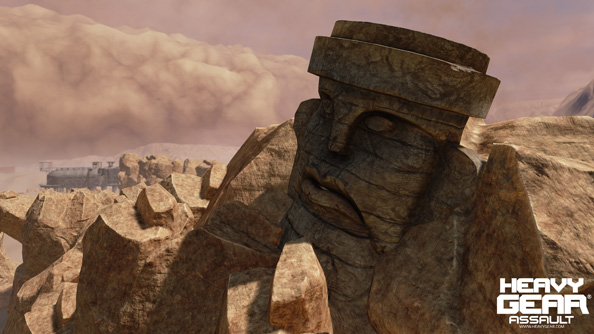 “What we are really aiming at is tournaments, and integrating the lore into it, so you can see different companies and manufacturers. Later on that’s where we’re headed.”

MekTek’s priorities are apparent in the taunts that already find mechs doing the Gangnam Style gallop in alpha. And the Epic, MSI and Razer-sponsored tournament in March that saw the top player win a PC after logging 1000 matches in three days. They’re building the chassis for e-sports – but it’s up to potential pilots to jump in and seize the controls.

In this sponsored series, we’re looking at how game developers are taking advantage of Unreal Engine 4 to create a new generation of PC games. With thanks to Epic Games and MekTek Studios.