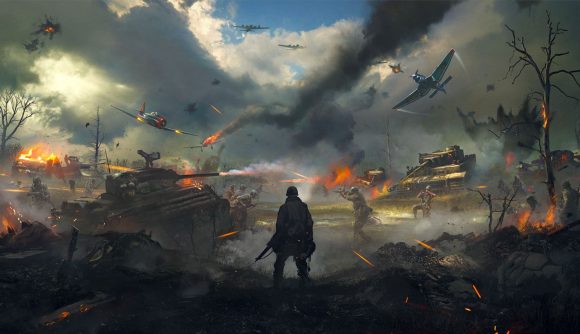 Hell Let Loose, the early access 50v50 multiplayer shooter, has got a hefty new update. Titled Battle of Carentan, the update – the FPS game’s biggest so far, according to developer Black Matter – ushers in an overhaul for its animation system, a brand-new map, two map reworks, a full redesign of firearms’ SFX, and more.

As announced in a press release, Hell Let Loose’s latest (seventh) chunky content drop adds the Carentan map, which is open to tackle in both Offensive and Warfare mode. The former tasks the defending side with trying to hang onto all of the map’s various sectors while the opposing force attempts to poach them all, while the latter is more of a struggle for both sides against the clock, with the winner being the one holding the majority of sectors when time runs out.

The map’s setting, the town of Carentan, has been recreated to-scale in the game. To do just that, Black Matter says it used ” real maps and reconnaissance images from the time”. It goes on to explain that this “introduce[s] a new urban style of warfare” to the game’s options, with close quarters combat in its streets and buildings.

Alongside a new trailer for the update, included below, the dev reveals it’s added a whole new animation system and “greater audio fidelity”, too, as well as overhauls of the war game’s Foy and Omaha maps.

See you on the frontline. #UE4 pic.twitter.com/jPeluIulIL

“The real world fighting in and around Carentan was brutal and entirely different to any of the other battles held during the war up to that point,” Black Matter studio head Max Rea says, “and it’s that experience that we’ve aimed to reproduce as best and as accurate as possible for our incredibly passionate and growing community of players.”

The update should now be live in the game on Steam, so go get stuck in.