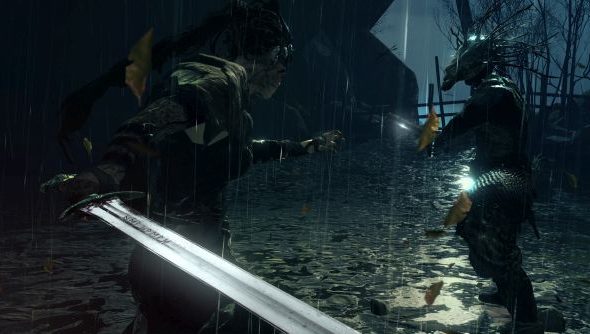 What an odd, hopefully great thing Hellblade is. A third-person action game from Ninja Theory, of the excellent DmC reboot, it’s looking to deal with some fairly heavy concepts in its story of celtic warrioress Senua. Having experienced the full force of a viking invasion, she has her own fractured psyche to deal with as she tries to survive in the wilderness.

In a new dev diary, Ninja Theory present the three core tenets of the game and show how they interact.

I’m cautiously optimistic for this. Senua looks like a badass, Ninja Theory make good games and if they’re going to focus their talents anywhere, the already fantastic visual design of their worlds is a good place. Some bits of DmC have never been topped, particularly the upside-down subway bridge, endless dance floor and fighting inside a news broadcast.

If they also manage to handle serious subjects with the care and gravitas they deserve, while hopefully making a point beyond ‘this sucks, yo’, all the better. That I have less confidence in, subtlety not having been Ninja Theory’s strength in the past. As mentioned in the video, they and technology are maturing but that’s no guarantee. However, I’m glad they’re trying something different – that I will always support – and the ‘AAA indie’ model has done very well when studio’s have nailed it in the past. Think CD Projekt.

2016’s the current vague release date for Hellblade. We’ll probably see more of significance around Christmas, though there’s a lot of extra videos over on the official site.