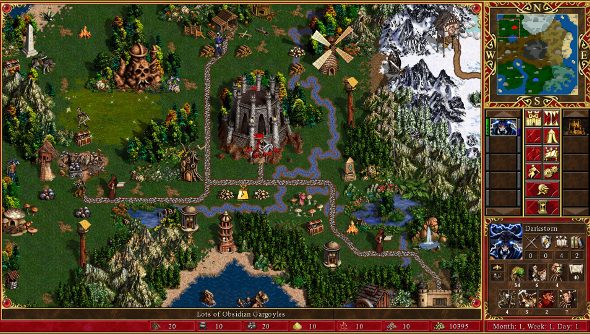 I was grounded several times thanks to Heroes of Might & Magic III as a wayward youth. I could hardly be blamed for ignoring trigonometry or yet another bloody Shakespeare play when such a monumentally addictive strategy game was just sitting their, in my PC. But now, almost 30, I’m gleefully anticipating spending however much time I want with the recently announced HD remake.

Fifteen years after it first came out, HoMM 3 is getting a new coat of paint and Steamworks support. Along with the PC release, you’ll be able to grab it on tablet if fighting fantastical turn-based battles is the sort of thing you long for when stuck on the bus or sprawled on the sofa.

Slap your eyes on this video of a hydra getting a makeover, because why not.

The HD remake is keeping the original game in tact, and even the new art simply serves to make everything sharper and more detailed, rather than a complete overhaul, style and all.

Lamentably, this is just the core game, and neither of the expansions are getting their own upgrade.

You’ll be able to get your grubby mitts on Heroes of Might & Magic III on January 29th.