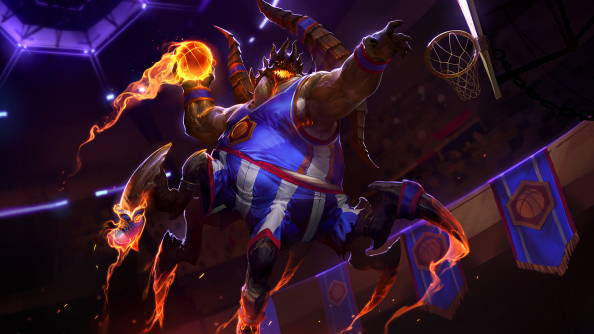 Azmodan, Lord of Sin, was a lesser evil of the Burning Hells – the last of the Great Evils to be trapped in the Black Soulstone. But Azmodunk, lord of the Burning Court, can slam a flaming b-ball onto the heads of his enemies with lethal force. Has there ever been a more compelling case for a skin swap?

Here are all the new cards coming in Whispers of the Old Gods, the new expansion for fellow Blizzard eSport Hearthstone.

Azmodunk will come to Heroes on April 12 with a special banner mount and in three colour variations. The third colour and the mount will be determined by the winner of this year’s Heroes of the Dorm college competition.

Compete in the Heroes of the Dorm Bracket Challenge, and there’ll be a chance to win an Azmodunk bundle as one of the top 500 bracket winners.

There’s a point, just after the demon intones, “boom shakalaka,” where you can hear David Brevik’s anguished screams. But what is Heroes of the Storm for if not to indulge the inherent silliness of Blizzard’s universes?