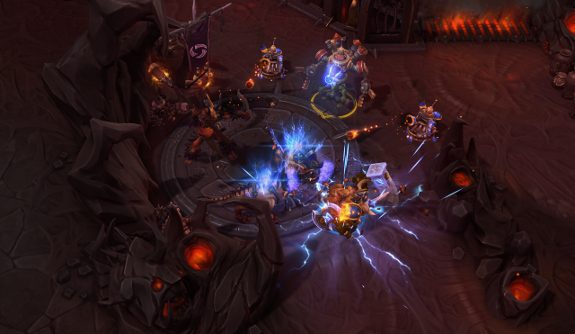 Now that Heroes of the Storm has been officially released for a month, you’d think the team at Blizzard would be able to put their feet up and take a load off. You’d be entirely wrong, because there’s an neverending battle between the forces of Heaven and Hell that’s now gripped the Nexus, which means more heroes, more battlegrounds and a bunch of cosmetic goodies, all Diablo-themed, of course.

It’s time for the Eternal Conflict to hit Heroes of the Storm.

The Eternal Conflict event kicked off today, introducing a new map, the Battlefield of Eternity, and a new hero, The Butcher. It’s also worth keeping an eye out for those greedy treasure goblins, who will pop up from time to time throughout the event. Kill one before the match begins, and you’ll get an in-game gold reward for your services to goblin eradication.

Two more heroes, King Leoric (the boney fella) and Diablo III’s Monk, will appear later, as the event will run for multiple weeks. A second map will also pop into existence during the event.

“We’re excited to bring the world of Diablo deeper into the Nexus and introduce our first Battleground based on an existing universe,” said Blizzard CEO Mike Morhaime,“Players are in for a hellishly good time with the Butcher and other Heroes on the Battlefield of Eternity, and we can’t wait to add more Diablo-themed content to Heroes of the Storm as the Eternal Conflict wages on.”

We’ll be posting our impressions of today’s update tomorrow, so keep your squishy eyes peeled.