This month concludes Blizzard’s and the Texas e-Sports Association’s Heroes of the Dorm tournament, in which a huge number of collegiate Heroes of the Storm teams compete for a grand prize that pays for three years’ worth of college tuition.

On one level, the tournament has been a huge success. It’s a neat idea that attracted teams and players from outside the traditional professional eSports community, and it even aired on ESPN3 this weekend in the United States. But it’s also a tournament that was marred by a series of misjudgments that called the tournament’s competitive integrity into question.

Blizzard and its partner running this tournament, the Texas e-Sports Association (TeSPA) made a classic error when they made their plans for hosting Heroes of the Dorm: they offered college students free stuff just for signing up. In this case, participating in Heroes of the Dorm came with free beta keys.

As any college-town bar owner or university caterer will tell you, you don’t offer college students something for free without being prepared to get absolutely mobbed. And that’s exactly what happened as nearly 900 freaking teams signed up to compete. But while TeSPA suddenly had an unruly 900-team tournament to administer, a large number of those teams vanished into thin air the moment they got their keys.

The sheer size of the tournament is where TeSPA’s problems began. When you have this many teams competing, it becomes difficult to choose a system that is both fair and practical. A round-robin system would have either required a mind-boggling number of separate groups, or a ridiculously long group stage. A giant elimination bracket would have been a lottery, with no guarantee that good teams were advancing over worse ones. So they opted employ a Swiss system for their initial group stage. 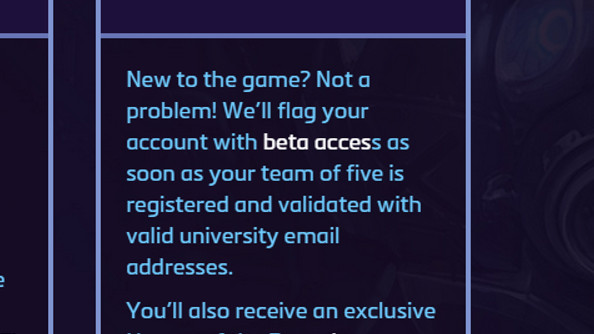 The Swiss system is popular for large tournaments like Heroes of the Dorm, because it sorts the competitors as the rounds advance. Stronger teams are matched against stronger teams, weaker ones with weaker ones. The sorting continues with each round, until the end of play. But the sorting itself is complicated and hard to understand from the outside, and there can be problems when it comes to deciding ties. Especially when, as was the case with this tournament, many of the groups were rife with no-show teams that would have skewed the results and matchmaking.

But the already tricky matchmaking and ranking issues got worse thanks to a series of problems and errors that occurred as the tournament continued. It all came to a head in Heroes of the Dorm’s Group 14, where the top five teams all finished with matching 6-1 records. Only four could advance, and, after play closed, TeSPA seemed to change how ties were decided.

Derek “TheoRy” Travisano is a Georgia Tech student whose team was the lone 6-1 team to miss advancement from that group. Travisano and his friends at Georgia Tech had formed a “dream team” of the best gamers on campus to compete in the tournament, under the name “SneakyBeakyLike”. They bootcamped the game intensively for a month, spending money to accelerate their climb into ranked play so they could play Heroes at the level they’d need to compete.

“It’s the most [effort] I’ve ever put into a videogame in one month,” Travisano said.

I met Travisano at a StarCraft tournament last year. He reached out after receiving word that his group would not be advancing. Here’s his story. 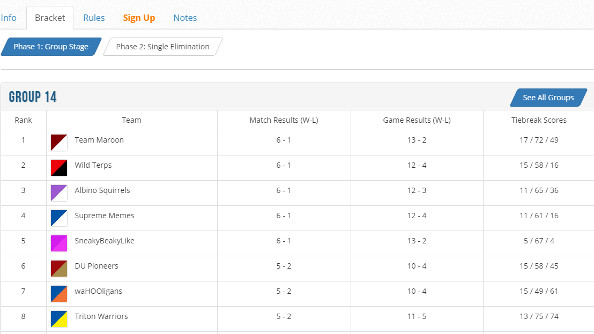 Even before the final weekend of play, Heroes of the Dorm’s group stage had been plagued by issues. There were far too many no-show teams listed in the group, which meant that a lot of teams were being given byes… which also created complications for the way the Swiss system assigns matchups or tie-break scores. Then there were significant delays and even a server crash that caused TeSPA decided to push the final games until Easter weekend. That meant that a lot of teams were suddenly short players due to family and vacation travel plans.

Travisano’s team decided to stick around campus for Easter weekend so they could have a shot at advancing. One player called off work at his job so he could play his games on Saturday. Little did they know that their fate was basically already sealed thanks to a rule that TeSPA had never made public.

According to the rules displayed on TeSPA’s FAQ page for the duration of the group stage, the top four teams in each group would advance. “To make it out of your group, you must place in one of the top 4 spots on the leaderboard. The leaderboard is determined by Match Wins > Game Wins > Tie Break Score [emphasis added].” 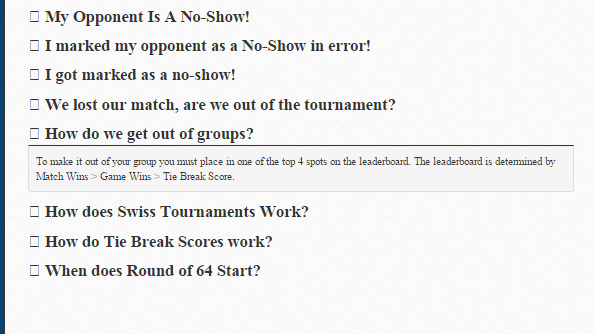 So on Saturday night, after they finished their group play, Travisano’s team were ecstatic. They finished in a tie for first place on match victories, and had won 13 of the 15 games they had played. Three of the teams with 6-1 records had only gone 12-4 in the group stage, which would mean they would come in behind SneakyBeakyLike.

But when they woke up on Easter Sunday, the Georgia Tech team had an email waiting for them thanking them for competing and awarding them a consolation prize: an Azmodan portrait.

TeSPA only released one statement about the controversy as members of SneakyBeakyLike took to Reddit, Twitter, and TeamLiquid to complain about how they were treated. In TeSPA’s characterization, “inaccurate verbiage” caused a “misunderstanding” about how the results would be calculated. “We hope that this better explains why we made the text changes that we did,” they said.

The problem is that clearest description TeSPA offered to competitors about their tournament system said something completely different. And nowhere, as nearly as I can tell, did TeSPA every clearly explain how ties would be broken. The “full rules” PDF only says that the tournament would use a “Swiss style tournament competition.” That’s not entirely cut-and-dried, because there are a number of recognized methods to resolving ties in Swiss system. It’s not a minor detail that can really be hand-waved away.

I reached out to both TeSPA and Blizzard early last week for comment, and while TeSPA’s Adam Rosen agreed in principle to discuss how this group stage was handled, he never committed to an interview time and nobody else from TeSPA responded to additional requests for comment. A Blizzard representative responded late Friday night, explaining that no additional comment beyond TeSPA’s public statement would be forthcoming. 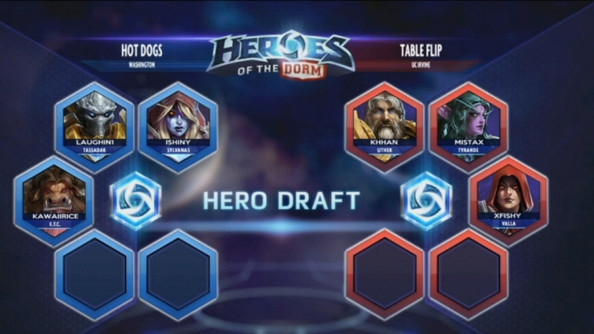 Travisano and his teammate, Adam Perez, were not satisfied. The two are both computer science majors in their senior year, and Perez took the time to check the math and matchmaking throughout their group and came up with a series of inconsistencies in the matchmaking. Starting in round 4, according to Perez, the group began assigning teams the wrong matchups. Since the sorting of teams into the appropriate matches is the cornerstone of the Swiss system and the mechanism by which TeSPA derived their tiebreaking values, they are convinced that even by TeSPA’s own rules, their group results were invalid.

After a lot of prodding, they did manage to get an administrator from TeSPA, Logan Fishel, to chat with them via Skype. Fishel conceded that there did appear to be a number of inappropriate match-ups in the fourth round, but felt it was debatable whether those would have ultimately skewed the results of the group. While Travisano and his team wanted some kind of playoff or replay among the tied teams, Fishel suggested that it was too late.

“Any rule change outside of our original system would certainly unfairly impact somebody. And because of that the best thing to do is to stick with our current system and rule set,” Fishel wrote. “In the future we can look for better ways to make results feel more definitive, and we certainly appreciate your feedback in this venture.”

A week after receiving word they were knocked out, Travisano and Perez are moving from outrage into resignation. I asked if they’d ever compete in another TeSPA tournament again and received a, “Hell no!” and “Never again,” from them, respectively.

While they’re disappointed they didn’t advance, Perez insists he’s not just being a sore-loser. He still doesn’t know how the system derived his team’s tie-break score, and is upset that they only revealed the tournament’s “real” rules after play was completed. But that’s not the real deal-breaker for him and Travisano.

“They don’t own up to their mistakes,” he said.

In the scheme of things, even in the context of the Heroes of the Dorm tournament, this may not be that big a deal. Five students got their hearts broken and their victory snatched away from them at the last second by a rule they still don’t understand, and that they’d never heard-of. Perhaps, if the rules had been clear from the start and all the matchmaking perfect, they still would have failed to advance. TeSPA had a colossal task trying to wrangle this tournament, and out of 900 teams and 64 winners, they only have one really controversial result. It’s not bad work, as these things go.

But when it comes to sports, the principle of fair play looms large. The Heroes of the Dorm tournament continued this past weekend and received national attention on ESPN. As a marketing event, it’s been a success. But the fact remains that TeSPA operated a tournament for two weeks according to one apparent set of rules. And after all the games were played, they said the rules had been different all along.