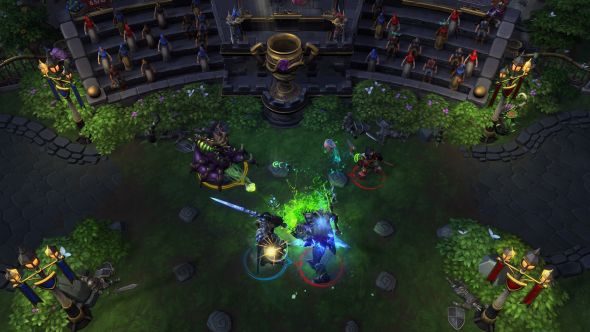 Heroes of the Storm’s Arena mode was originally unveiled to much fanfare as the big announcement for the game at BlizzCon 2015. Then it sort of just dropped off the map, with Blizzard releasing an explanatory video but not a lot else. It’s apparently now changed into its own mode and is still being worked on.

All of Blizzard’s Gamescom announcements in one place for you here.

“We’re still working on [the arena] right now,” says production director Kaeo Milker at Gamescom. “We kind of went from the arena we showed at BlizzCon last year, we’re trying to develop it into a full fledged game mode. So we’ll have more info on that soon but we’re still doing it, it’s coming, we’ll talk about it soon.”

For the unfamiliar, here’s how it looked shortly after BlizzCon last year:

From what Milker said, it sounds like they’re designing maps for it rather than exploiting the ones that are already there. At a guess, it ended up not being quite as fun as they expected, or they wanted it to be a viable competitive mode with more decisions being made.

As far as the future of Heroes, Blizzard also say they’re looking into overhauling progression. “It’s one of the next things I want to take on,” explains systems designer Travis McGeathy, “progression as a whole. I don’t have any details on it, but things like [more hero rewards] are exactly what I’m looking at. So I expect to be able to talk about that probably a few months out.”

So not a lot of solid info on either of these, but there is stuff in the works. Here’s everything they announced as being in development yesterday: