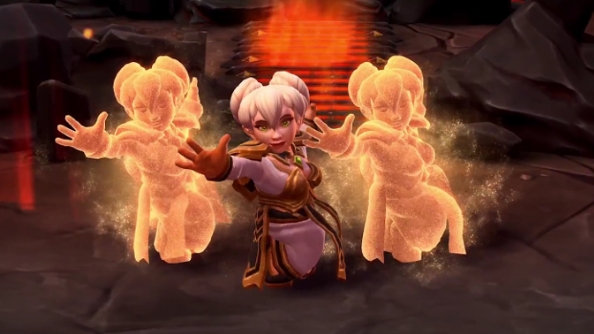 Blizzard’s latest cherry-pick for Heroes of the Storm is Chromie, a World of Warcraft gnome assassin who’s actually a bronze dragon in disguise. With a variety of time-altering powers, her slight size certainly doesn’t advertise her strong abilities.

Obsessed with lanes and ganks? Try one of the best MOBAs on PC.

Chromie’s abilities focus on slowing down and debilitating other characters, allowing allied heroes or Chromie herself a little time to throw in some extra damage. Her Time Trap freezes enemies in place for a short duration, while Slowing Sands creates a vortex that slows enemies that pass through it. The longer the vortex is maintained, the stronger the slow becomes.

Temporal Loop is a rather fancy pull-back spell that ‘locks’ and enemy to a specific point on the map. They’ll be able to run away for a few short seconds, but will then be teleported back to the point they were marked at. Sounds perfect for enemies trying to escape a melee.

As for offensive abilities, Chromie’s Sand Blast fires a missile of sand that passes through objects until hitting an enemy, while Dragon’s Breath is a sneaky AoE attack that doesn’t display a marker for enemies, meaning they’ll never know where it’s going to hit.

If Chromie sounds like the hero for you, she’ll be jumping into Heroes of the Storm’s Nexus this week. Keep an eye on the roster for her any day now.