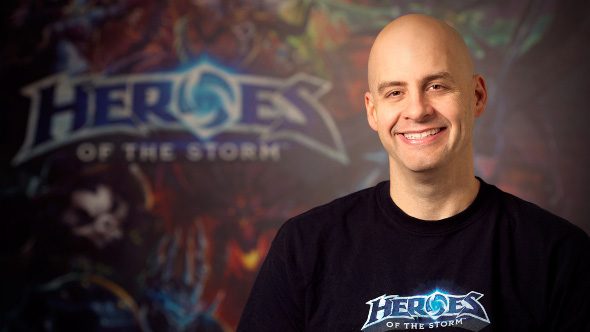 Blizzard went through something of a transitional phase towards the end of last year, with big names like Chris Metzen and Craig Amai moving on from the company, while Dustin Browder and Tom Chilton moved to still-unannounced (and, thus, much anticipated) projects within big blue. However, Browder has not totally left the MOBA he helped build behind.

Check out Probius, the latest Heroes of the Storm hero.

“Dustin is a resource, like he’s just downstairs, he’s not that far,” reveals game producer Claudio Gentilini, who himself has been with Blizzard for over 10 years, most of that on the StarCraft II team that became the Heroes one. “Designers still talk to him, we still have one-on-ones and discussions, he still gives us feedback when he plays a hero that he likes.”

New game director Alan Dabiri was well up for the task, though, and had plenty of non-public lead time to prepare. “Alan has been at Blizzard maybe like twice as long as Dustin, he’s been there from almost the onset, [since 1996]. He’s been our technical director so [was] already in most all of the meetings that Dustin was in, leadership meetings and discussion meetings. He’s extremely checked in to the game, multiple thousands of games of Heroes, so he’s not a noob, he’s not just coming in with 100 games trying to figure things out.

“Alan is extremely experienced and he bleeds Blizzard blue all the way through. He’s doing awesome stuff already. [Plus,] behind the scenes before that announcement was made, he’s already been transitioning all through that period.”

Gentilini, like Matt Goss of the WoW team back at BlizzCon, also noted that the Heroes squad has an “insanely deep bench.”

“Some of the guys that are in our leadership roles have been in the industry for 12, 15 years. Our lead balance designer has been on the team since before Wings of Liberty. You wanna talk about a hard game to balance, look at StarCraft, right? They won’t even let you make a single numbers change before the pros will freak out and the community’s throwing tomatoes at you.

“Kent-Erik Hagman is one of our earliest designers, he actually started designing battlegrounds very early on and moved very naturally into our lead hero design role. He’s top eight or ten people on the team [in terms of time here], five years or so, those guys have been there all the way through and that’s not changing any time soon.”