There’s interviews with Heroes of the Storm game director Dustin Browder popping up all over the internet revealing that the next characters to be introduced will be Diablo III’s Wizard and, surprisingly, the Necromancer from Diablo II, who has thus-far failed to make the jump to the sequel. They’re named Li-Ming and Xul respectively, and while Xul is all about split-pushing and building an army around himself, Li-Ming is one of the highest skill-cap heroes introduced thus far.

As its influence grows, Diablo also makes a stop off in our picks for the best RPGs.

The Wizard has a passive that resets all of her cooldowns whenever she’s part of a kill, coupled with a tonne of skillshots that operate in odd ways. Her Magic Missile spawns from her sides rather than directly in front, while her Arcane Orb does more damage at longer range, but moves slowly. She also has a teleport to round out her basic abilities, but one that only goes a very short distance. Meanwhile her big finishers are a Disintegration Beam that does extreme damage to targets at long range while channeled and Wave of Force that detonates a bomb, doing good damage in a targeted AoE but also pushing enemies around, getting them out of the way or pushing them towards your guns.

She’s a fairly standard damage dealer, but one that Dustin says requires a lot of effort to get right. Resets like her passive have always been strong in other MOBAs, usually making a character a meta staple for as long as the game has a competitive scene unless they’re nerfed completely into the ground. Expect a big impact from her. 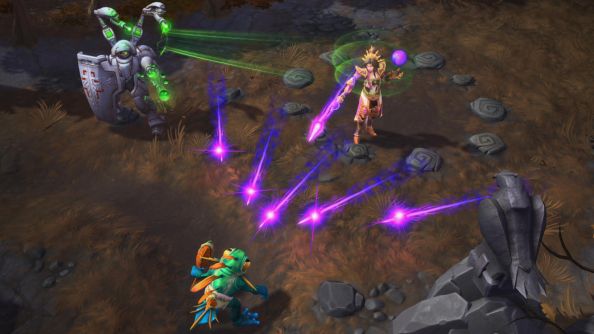 Meanwhile the Necromancer, who is making his debut after repeated requests from the community since 2013, is a little stranger. He’s a melee specialist who automatically brings dead minions back to life as up-to-4 skeletons that can push lanes, get in the way during hero fights and generally make a nuisance of themselves. He also has Spectral Scythe, a skillshot that spawns away from him and then rushes back towards, letting him target it by moving himself around. Cursed Strike makes his basic attack an AoE and puts a debuff on any targets hit to reduce their attack speed byhalf,crippling enemy damage dealers.

His last basic ability is a Bone Prison that gives the enemy a two-second warning before applying a two-second root. It’s targeted, so no worries about trying to hit it. Dustin says it works well with his first heroic, Poison Nova, that does massive damage to everyone around him and applies a DoT. The second is Skeletal Mages, which creates a wall of creatures at long range with slowing attacks and blocking bodies. It’s an important tool for when he’s finding it difficult to get into the battle.

Last night Blizzard also deployed a much-needed balance patch that has been received well by the community. The main targets of the changes was the rapidly emerging ‘stun-meta’ that focused around locking individual powerful heroes down and killing them instantly. There were also some heavy nerfs to Tyrande along with light buffs sprinkled across a few other cast members.

Thanks, Gamespot and Razer.