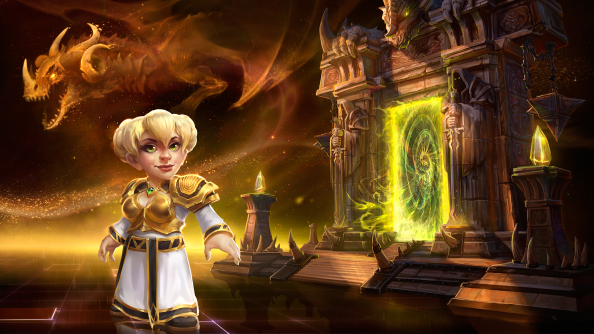 Recently, the Heroes of the Storm subreddit had a bit of a concern over the game’s longevity and life: one user, DarthGanondorf, made a post pointing out the lack of merch in the official Blizzard store for Heroes of the Storm, where five pages were reduced to one, consisting of very few items.

Can’t figure out which one to dive into? Let us help with our handy guide to picking a MOBA.

Concerns from the subreddit came from a few directions, such as blaming the Overwatch League for taking Blizzard’s resources, speculation that the items just weren’t selling well, and one comment over 500 words long that feared Heroes of the Storm was “going to go down the Paragon route,” referring to how Paragon was cancelled.

Braithwaite says the Heroes of the Storm merchandise being pulled is completely unrelated to the health of the game, though, and that people have focused in on the wrong thing. “Heroes of the Storm is not dying. We’re not giving up on it, nothing like that – in fact, we’re excited about HGC 2019, we’re already talking about what we’re going to be doing next year. We’re already talking about the content we’re going to be putting out next year, in terms of heroes, battlegrounds, and that kind of stuff.

“In general, I think people are taking something that is very unrelated, at all, to the game’s health, which is some merch that we’re re-evaluating, and kind of putting a doomsday ticker on that, which is absolutely not the case. We have an incredibly jam-packed content schedule for the rest of this year, people are going to be really excited for the stuff that we have planned, we have several awesome announcements that will come out of BlizzCon, tons of new heroes down the pipeline, new battlegrounds, you can expect the same level of support from Heroes of the Storm that you’ve been getting.

“We did announce recently that we’re going to be slowing down on hero releases, but that, once again, is not a sign of anything, it’s just a process that we’re taking to re-evaluate. We want to make sure that we’re giving attention to a lot of older heroes that were released, and making sure that they have spot viably, both competitively as well as in quick play, and so we’re going to be spending a lot of time reworking as well as putting out new heroes.”

Amidst that is also confirmation of two further things: Heroes of the Storm will be getting something special at BlizzCon (which is completely unsurprising, but further reinforces the face that Heroes of the Storm isn’t likely to shut down soon) and that more hero reworks are coming (again, unsurprising, but shows Blizzard are anticipating the upcoming Medivh and Sonya reworks to be successful).

So, put the pitchforks down. The servers shouldn’t be going down soon.