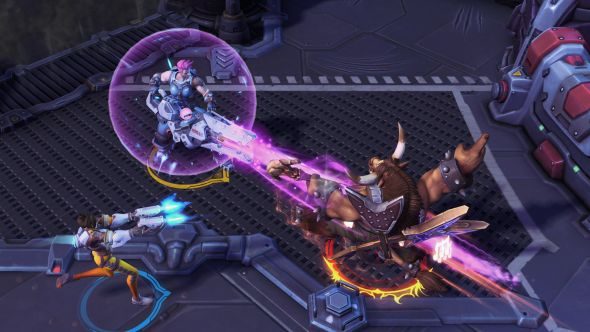 In a presentation at Gamescom, Blizzard revealed that Overwatch’s post-game cards system would be coming to Heroes of the Storm. This picks out players on each team, making one the MVP and highlighting others who did particularly well in certain areas – healing done, damage to opponents, that sort of thing. You’ll also be able to vote on which you believe had the most positive effect on the game. They’re also “looking at” introducing Play of the Game, but it’s a diffcult process.

Everything else we know about the Heroes of the Storm: Machines of War update.

The MVP cards and voting system won’t provide any permanent benefit or in-game currency, in the same way that in Overwatch this was avoided to stop people changing the way they play in the hopes of receiving the rewards, or getting angry at allies that don’t vote for them. They’ll highlight things like most damage to enemy heroes, or map-specific achievements based around that battleground’s objectives.

“Heroes is pretty much a team-based game and we’re looking for ways to call out individual honours, kind of celebrate and recognize that, and also allow players to do [the same],” says systems designer Travis McGeathy. “So at the end of a match we’re going to call out the most valuable player of the game and we’re also going to call out four members of the team who excelled in a much more specific area like ‘most killed’, ‘most hero damage’, something along those lines.

“The good part of this is that the awards go to people on both teams, you don’t have to win to get these, it’s about individual performance. It’s totally possible for the losing team to have the MVP, especially because how easy it is for you to come back in our game. If you’re pushing hard the whole game and the enemy snuck in through the back door, the MVP could be on the losing team.”

As for further expansion, they want to do an Overwatch-style Play of the Game for the ends of matches too, but it’s complicated. Overwatch is still struggling to get it right, and Mcgeathy says “we’ve been looking at it. It’s much more complicated because you need to go in and figure out all the maths. But you know, MVP itself wasn’t the easiest thing in the world and we’re pretty happy with it.”

The cards system will go live on the PTR at the same time as the new skins and heroes revealed yesterday, within the next couple of weeks. It will also release with the rest on September 13, which is when the second season of ranked play will begin.