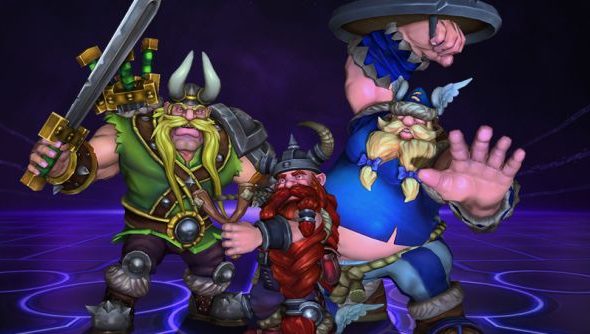 Blizzard’s mash-up MOBA, Heroes of the Storm, is enjoying the newly acquired company of The Lost Vikings – a new three-in-one hero for players to use in the Nexus. The addition is a first for the game, as it marks the first hero not associated with either World of Warcraft, Diablo or Starcraft.

The nordic trio first made their debut back in 1993 on the Super Nintendo Entertainment System, but were re-released for free via Blizzard’s Battle.net store.

The Lost Vikings fill the spot of specialist for a very good reason: each viking can be controlled independently with their own unique abilities. Olaf is a natural tank with high regen and the ability to slow enemies. Baleog can deal splash damage to enemies behind his current target. And Erik is extremely agile, while also sporting a much longer attack range.

That’s not all though. The Lost Vikings arrived in a longboat full of patch notes, including a major balance rework, interface overhauls and bug fixes. We’ve got the full patch notes on the next page for you to take a gander at, before you begin plundering the battlegrounds with the troublesome trio above.

The Lost Vikings, (Olaf, Baleog, and Erik) just fell through a Nexus portal and are now available for play! Read on for a brief overview of their Abilities, as well as how to control the Vikings in-game.

The Lost Vikings’ Basic Abilities must be unlocked through Talent Selection.

Though Team League is not available with today’s patch, those who have achieved Player Level 40 will earn a new progression reward which indicates that they are eligible to compete in Team League. This reward will be displayed in Player Profiles, Quest Logs, and endgame Score Screens, but Team League will remain disabled until a future update is released.

It is now possible to view recent in-game chat messages by opening the chat box to type a new message. Only the most recent messages will be displayed in this way. Additional improvements will arrive with future updates.

The following items have been temporarily disabled for further evaluation and improvements:

A new Quest Log button has been added to the lower-right portion of the bottom navigation bar, next to the Friends List button.

The Quest Log will be locked prior to earning the Daily Quests reward at Player Level 6.

The Quest Log will also be automatically displayed upon each login, which should help players more easily keep track of their Daily Quest and progression reward progress.

The Player Profile screen has received an overhaul.

The Daily Quests tab has been removed.

The Profile Summary tab has been enabled.

Players can use this tab to view general information about their Heroes of the Storm account, such as: Recent Victory, Most Played Heroes, Total Hero Level, Ranked Play win-rates, games played with each Hero role, and much more!

The Rewards tab has been renamed to Player Progression

This tab can be used to view current Player Level, progress toward the next level, and all Player Level progression rewards.

The Hero Progress tab has been renamed to Hero Collection

Hero Progress has been visually reworked, allowing many more Heroes, their current Hero Levels, and progress toward the next level, to be displayed on each page of the Hero Collection tab.

Additionally, clicking any Hero portrait on the Hero Collection tab will bring up that Hero’s 3D model, as well as detailed information about its current Hero level and reward progress.

The Match History tab has been enabled.

Select this tab to view a list of recently played Heroes of the Storm matches.

The game mode, Hero, and Battleground selected, as well as the game’s result, and a timestamp will be displayed for each match in the list.

A Statistics tab has been added.

Players can use this tab to view additional statistics about their performance in Heroes of the Storm, such as: Heroes they’ve scored the most takedowns or received the most deaths with, total games played, and Battleground win-rates.

A Portrait tab has been added.

Portrait Selection has been moved from its previous location to this tab, making it easier than ever for players to find and choose among the portraits they’ve already earned, or simply browse through the portrait rewards they have yet to unlock.

Hover the mouse over any Portrait to display a tooltip that explains how it can be earned.

The tracking and penalties for leaving in-progress Quick Match and Hero League games before they are finished have been changed:

Leaving multiple Hero League or Quick Match games without reconnecting will now flag the player to receive the following penalties:

Watchtowers on the Sky Temple Battleground have received updated art.

A number of in-game Hero portraits have received additional polish.

Dance, victory, and taunt animations have been added to a number of Heroes.

Elder Chen and its Variations

Grunty Murky and its Variations have received updated art.

Additionally, Grunty Murky has wriggled his way into a brand new suit of Terran power armor, and dropped his fish for a much creepier weapon: a Zerg Larva!

Jaina Skins and all Variations have received minor updates.

A number of summoned units have received visual updates and polish:

The Pajama Party Lost Vikings Bundle has been added to the in-game Shop for a limited time.

Head here for more details on all of the Bundle Packs that are currently available for purchase in the Shop.

The Lost Vikings have been added to the in-game Shop!

A Master Skin has been added for The Lost Vikings.

The Pajama Party Lost Vikings Skin has been added to the Shop.

A loss of control channel bar will now appear when Heroes are Silenced (as they do with Stuns).

Murky and The Lost Vikings’ deaths are now represented in 0.25 increments on score screens, as killing Murky or one of The Lost Vikings awards 25% of the normal XP amount earned by killing another hero.

All Heroes (including Murky and The Lost Vikings) now count as full credit toward Talents which require Hero kills (such as Gathering Power).

Four new Talents have been added at Level 20 for a number of Heroes:

Fury of the Storm