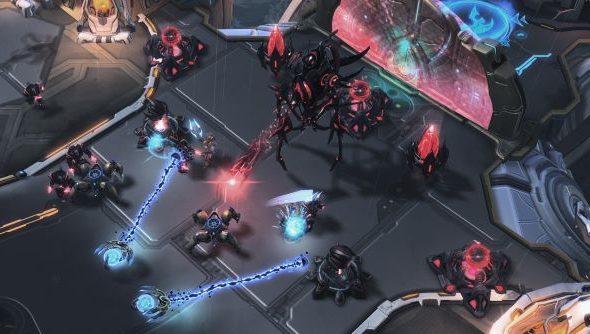 Blizzard game plots! They’re magnificently cheesy over-the-top nonsense at best, cringe-worthy garbage at worst, and that stretches all the way back to 1994, no matter what the old-school fans may tell you. However, a new fan theory may have uncovered the best ever told. Before we go any further, you did read that spoiler warning didn’t you? Most of this stuff comes from Legacy of the Void’s final cinematic, so consider yourself warned.

Thinking of following this path of logic? You’ll need the best Heroes of the Storm heroes for beginners.

So, in case you aren’t familiar with the ending of Legacy of the Void, here it is:

That’s Kerrigan zapping a giant ancient space cthulu with a big sunbeam, absorbing its power and then becoming her own giant ancient space cthulu. It’s a ridiculous end to the series, capped off by a slightly touching if mostly non-sensical moment where she turns up again in her old ghost suit and grabs her ex-boyfriend, freedom fighter/redneck Raynor. With the most perfect final line in all of video game history, I might add.

As posted by Reddit user r_gg during a recent Heroes of the Storm AMA, Korean fans have been speculating that something very different is happening. They’re saying that it’s not Kerrigan, but Warcraft’s long-dead Paladin Uther – presumably using some sort of voice-modification and hair-dying technology – come to take Raynor away to the Nexus, as seen in the Heroes of the Storm Tutorial, to start pushing towers and killing creeps rather than mope and look sad.

Not convoluted enough for you? There’s a further, sub-theory, that an evil Uther (stay with me) hires Nova, using her third skin tint to appear as pre-infestation Kerrigan, to trick Raynor into coming with her to the Nexus. That nails the voice, shape and clothing problems while explaining why Raynor never shows up again and Kerrigan is suddenly not a giant pile of tentacles and eyes. I think we’ve solved it.

Stupid? Definitely. Deliberate? Almost certainly not. Great, and exactly the sort of thing Blizzard would refuse to confirm or deny? You betcha. Make up your own alternate endings below. Perhaps that’s what Arthas’ dad was doing there at the end of Wrath of the Lich King? It all makes sense now.