Blizzard’s upcoming MOBA/ARTS, Heroes of the Storm is brilliant. In a genre long defined by complex strategies and intricate, obfuscated goals that leave new players dazed while their teammates hurl insults at them, HotS does the impossible: it makes the gameplay simple and fun.

It’s true that HotS cuts out a lot of the strategic depth and room for player creativity that makes the genre so appealing to core gamers, but that doesn’t make it bad–just different. HotS will appeal to less-invested gamers looking to have fun without needing to study the hidden tricks of bugs-turned-features, like creep stacking, for weeks. I was fortunate enough to play 8 matches on the showfloor at Blizzcon. These are the big shifts HotS is making to ensure it’s extremely accessible, first and foremost.

1. XP is shared between your entire team Every drop of XP is thrown into a communal pool, which levels your entire team together. XP is the only currency (there’s no gold), so that means it doesn’t matter who gets the last hit–you’re all working towards the same goal. With no disparity in levels, it’s also much harder for blind-ragers to glance at their team roster and pick out someone to blame for their loss.

2. There’s no items or gold Instead, you pick a new talent every 3 levels (1, 4, 7, 10, 13, 16, 20). At most tiers, you’ll have three options to choose from, which can either be a passive perk, an adjustment to one of your three core abilities, or a brand new ability that perform similar roles to activated items in Dota 2 or LoL. You make, at most, 7 choices to customize your hero over the course of an entire match, compared to the average 30+ choices in Dota and LoL. You will be able to tweak talent trees outside of matches, but they aren’t saying how yet.

3. Matches last 15-20 minutes There are two towers per lane, death timers are long (30-60 seconds), and there’s a special mechanic on every map that acts like a game-finishing blow for whichever team unlocks it first. On one map, a pirate ship will decimate the defensive structures of your enemy. On another, all minions spawned for the enemy team only have one hit point. On yet another, a giant monster rushes down a lane, destroying everything in its way. The short length also significantly reduces the hateful blame spewed at teammates during a loss. In LoL or Dota, a bad player can waste an hour of your life. In HotS, you’re only losing 10 minutes—barely worth getting worked up over.

4. Gates make it easy to avoid ganks There are two series of gates on each lane, near the towers. In your own half of the map, you can run through the gate at any time, blocking LoS and targeted attacks from your enemies, whoi can’t run through it. This makes it much harder to gank a player who’s staying near their base. As soon as the enemy shows up, you duck behind the wall and are safe. Later in the game, players will have the strength to destroy the walls, but timid players should have no problem avoiding ganks early. 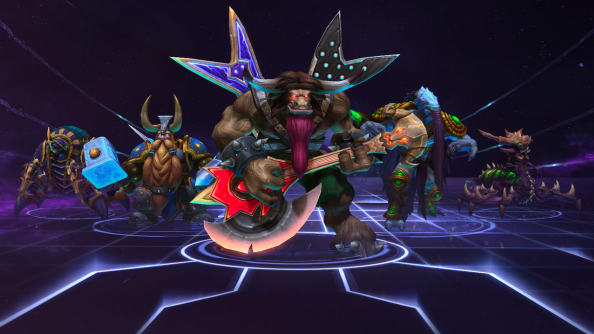 5. You get a bunch of healing in lane Enemy minions will occasionally drop healing globes on death, like in Diablo 3. Only your team can see them and you get a decent pile of HP and mana restored when you pick it up. Healing minions on your own faction will drop totems that also heal you up. Still hurt? Go to the Healing Fountain, tucked right behind that forward gate in your lane. Every 100 seconds, it can be used to give a big heal to you. In my first game, I received so much healing that I only returned to base once–when I died. That keeps the game moving fast, and the action steady.

6. Jungle camps tell you when to fight them, and then help you There aren’t many jungle camps on the maps I saw–just a few dot the tiny space between lanes. They’re friendly enough to tell you exactly what level they are and what level you should be to defeat them. Some are even conveniently labeled “Level X solo” to let you know you don’t need a group. When a pack of jungle minions are defeated, they become friendly and march to the nearest lane to help you fight.

7. Towers are sissies LoL towers are brutal–usually killing you in 4-5 shots. Dota 2 towers are a bit weaker, but still can’t be ignored for long. HotS towers, in contrast, run out of ammo and stop shooting for awhile–completely forgiving if you accidentally pick a fight too far forward. They start with 20 ammo, and refresh one ammo every 10 seconds, while firing much more quickly than that. Most of the time, I was able to let the tower waste its ammo on minions, and then sit within range, alone, while the towers did nothing.

8. You can play solo vs. very easy AI Although the show floor PCs were all PvP, the press area was nothing but solo games vs. AI bots. The bots were labeled “very easy” and worked hard to deserve that title with very low-skill moves and decision making. This will be a perfect, forgiving learning ground for new gamers.

9. There’s no wards LoL’s devs may be revamping its entire vision-war gameplay with a huge patch, but HotS just threw it out completely. Instead, you can capture vision pylons, like in StarCraft II, to gain vision over the surrounding area. All of that adds up to an extremely streamlined experience with no complex mechanics, or unclear objectives. You want to kill the enemy base and you go about that by running at things and punching them. It’s a distilled formula that takes the simple fun of the genre without the complicated baggage that makes the gameplay so mesmerizingly deep. 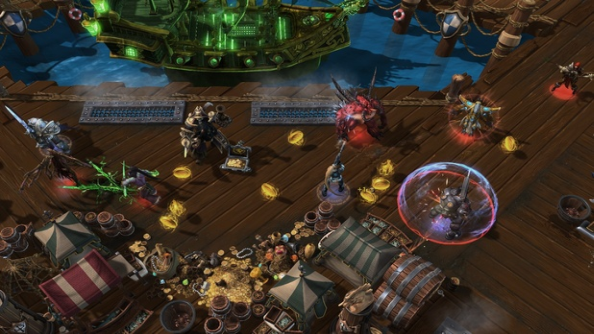 Don’t think that means HotS isn’t bringing any innovation, though. Some of the aspects are truly groundbreaking. Multiple maps, all with unique side objectives that influence the game world, is something other devs have tried to accomplish for years—Blizzard appears to have nailed it on their first go here.

Abathur, a Zerg hero taken from SC2, is one of the most creativev and out-of-the-box heroes I’ve seen added to the genre in many years. He can play the entire game without leaving the base (although the best ones will venture closer to the fight). He can attach his mind to any allied hero, minion, tower, or fort. When he does, he gains their vision and has a set of damage and shielding abilities he can cast from their position. This is his primary contribution, and it’s going to be very fun to see what coordinated teams can pull off with this.

The gross bug man can also teleport anywhere on the map every 30 seconds, and can place up to three landmines anywhere. His passive ability excretes a gross zergling minion every 20 seconds that runs towards the nearest lane and starts fighting. His ultimate lets him create a clone of any allied hero that last for 60 seconds (110 second cooldown), with full access to all of their abilities, including the ultimate.

It’s a crazy playstyle that feels more like a traditional RTS. You’re playing the larger game, reinforcing lanes that need it, and swooping in with extra firepower when your teammate goes in for the kill. And then you catch the enemy off guard with a double-ultimate they didn’t think was possible because you just cloned Diablo.

While Abathur’s complexity is definitely the exception—all of the other heroes I played are very straightforward and lack advanced mechanics—it’s a promising sign that Blizzard perhaps isn’t completely abandoning gameplay depth in HotS.

They’ve mastered the simplicity and fun at this point, and that’s enough to make HotS a hit. If they can somehow manage to provide more depth for dedicated gamers too, then this could be even bigger—maybe even genre-defining.