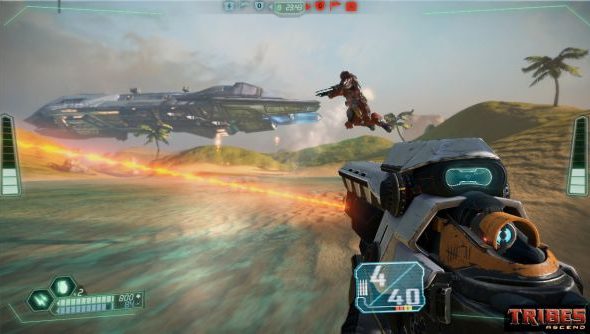 With more ‘whee’s than a public swimming pool on a Saturday afternoon and a free-to-play payment structure firmly rooted in pleasure rather than punishment, Tribes Ascend has become one of the PC’s great recent multiplayer success stories. But with a six month update hiatus looming, confusion over developer Hi-Rez’s EULA policy on third-party programs has threatened to pull apart its community.

“We only scan when our games are running,” Hi-Rez COO Todd Harris told us. “I just want to clarify that first and foremost.”

The furore is rooted in Tribes Ascend’s Terms of Service, which require users to accept a ‘Consent to Monitor’. The agreement, consistent with most game EULAs, allows Hi-Rez to collect data from your PC while you’re running the game. The intention is to flag up third-party programs running concurrently with Tribes and therefore eliminate aimbots that might disrupt the game’s finely tuned balance. So far, so standard.

But most Tribes players also run a process, HiPatchService, which checks for updates in the background of whatever it is they happen to be doing on their PC. In recent days, some players have reported receiving bans for running unauthorised third-party programs alongside this software, rather than the game client itself.

Harris, however, is adamant that’s not the case.

“Users want to know, ‘What are you actually doing?’,” he said. “And what we’re actually doing is just scanning when our games are being run. There’s still some misinformation around that. But that’s always been our policy and that continues to be the policy.

When asked whether the confusion had resulted from a breakdown in communication between the developers and their fans, Harris agreed.

“We definitely appreciate the concern, particularly here in the States where there’s been a lot of news recently on security related things that some people think are crossing into some internet privacy issues. So I understand that it’s a very sensitive and real issue.

“And I think that we may not have done as good a job – between us and Reddit and the press – it was difficult to communicate exactly what was going on.” 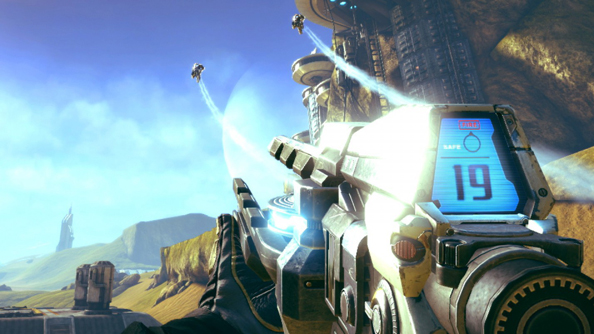 So why do Hi-Rez blacklist third-party programs that fiddle with Tribes’ inner workings? The chief concern, as you’ve probably guessed, is hacking.

“For us, the intent is around preserving a good online experience for people in terms of cheating,” explained Harris. “We don’t make single player titles, they’re all online, competitive multiplayer titles. So we battle daily to keep the servers as clean as we can, because most of the feedback we get consistently is around users really wanting a game that doesn’t have hacks. And so we feel that’s a very important community service that we provide.

“The community has been pretty clear that they want enforcement of that policy,” he added, “because they’ve seen how online games can quickly get destroyed by that. Even a few cheaters mixed with a lot of really good players gives the perception of a lot of cheaters.”

I pointed to a recent Battlefield 3 palette tweak that DICE quickly clamped down on, and suggested that smaller, potentially harmless mods can be swallowed up in the drive to stamp out aimbots.

“I guess that potential exists – I think it varies by game what the right policy is,” mused Harris. “The EULAs are generally written pretty broadly and standardly by the lawyers, and then each game developer needs to take the right position that fits their game.”

For Hi-Rez, unfortunately, palette tweaks might not be so harmless.

“For us, a lot of the monetisation is around customisation,” said Harris. “Since all our games are free, and since in both Smite and Tribes you can unlock all the balance effecting things for a certain one-time price, then things like customising your character with a skin – which could be considered a texture pack mod – [are] really a primary source of revenue that helps us support the game.”

But the COO suggested that in every other respect, Hi-Rez run an open-doored, community-friendly ship.

“We let users monetise users with all of our content, we support fansites, we support Twitch streamers, so we’re actually very supportive of users using the content in creative ways. It’s more around preventing hacking.”

{"schema":{"page":{"content":{"headline":"Hi-Rez respond to Tribes Ascend breach of privacy allegations; “We only scan when our games are running”","type":"news"},"user":{"loginstatus":false}}}}