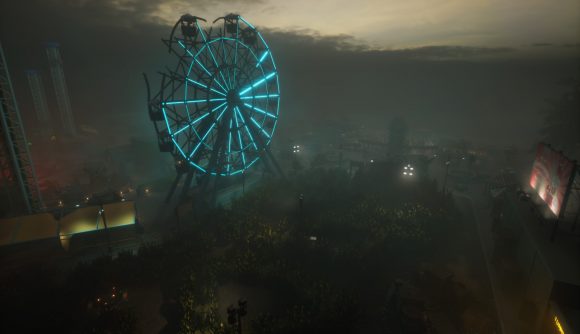 When Hide Or Die emerges from early access May 1, it’ll be an almost wholly different experience from the one it began its journey as. Fledgling indie developer VecFour Digital has reworked nearly every aspect of Hide Or Die since it entered the program, from character animation systems to gameplay modes. Now it’s ready for prime time.

Initially, Hide Or Die was meant to blend elements of asymmetric horror games like Dead by Daylight with battle royale, with 15 ‘survivor’ players working together to power up generators while being stalked by one player controlling a ‘hunter.’ However, maintaining a player base big enough to support matches that big can be tough – waning player numbers mean longer queue times, and longer queue times mean declining player counts. But instead of fading away into obscurity, VecFour decided to work with what it had.

The studio’s first big move was an overhaul in May 2019, which moved the game to a large, persistent map called Bale County. Players could drop in and out of this landmass, venturing out of hatches scattered around the area to collect darkness spores, hoping to avoid the roving hunters.

Now Hide Or Die is shifting gears again, and it’s another dramatic change: for launch, the new base game mode is a 3v1 ‘Extraction’ mode. Three unarmed survivor characters must face off against one hunter, collecting enough darkness to power up a tower and escape through hatches found in the smaller, much more contained maps.

In an extensive blog post on the launch, VecFour explains the process that led to these redesign decisions. Player numbers were a big factor, but the studio also considered how each match’s encounters happened and how often players would encounter a hunter. 3v1, it says, provides the right amount of intensity, since nobody can escape the attention of the hunter for very long.

At launch, Hide Or Die will feature three new maps: Carnival, Overpass, and Slaughterhouse – each with its own distinct horror aesthetic.
Hide Or Die will also launch with a free battle pass-style system that allows players to unlock characters and cosmetics as they play.

VecFour says it’s planned the 1.0 launch to attract both new and existing players back to the game, and to provide a starting point for the rollout of additional content.

“We’re proud of the feature sets and changes we’ve implemented and are excited to get Hide Or Die out the door, but even more excited to build a sustained community who will enjoy Hide Or Die for a long time,” VecFour says. “We hope you give it a shot and let us know what you think.”