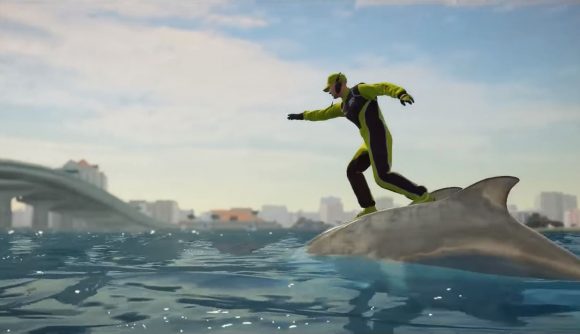 I’m not going to lie – I love the new Hitman games. Hitman 2 somehow makes 2016’s Hitman even better, which seemed impossible at the time. But it turns out Hitman 2 understands the inherent silliness of Hitman and steers in: You can, for instance, ride a dolphin out of the Miami map.

Yes, it’s secret. And yes, you need a fish to pull it off. There are spoilers ahead, so consider yourself warned.

To pull off the dolphin getaway, first you’ll need to assassinate Miami’s two targets, Sierra and Robert Knox. Head into the mission in the mechanic disguise, then make your way to the security checkpoint and pick up the car bomb. Bomb in hand, go to the kitchen and pick up a fish on the way to Sierra Knox’s car. Sabotage the car with the bomb and call her dad, then meet up with him and hand him the detonator.

He’ll be so thrilled that he won’t notice when you shove him to his own death on the racetrack below.

On your way out, head to the dolphin fountains located in the entry plaza by the harbor. You’ll have to hit the colored tiles in a specific order, which then unlocks a special ending, featuring Agent 47 coasting out of Miami on the back of a friendly dolphin.

This video has the details:

As you can see, Agent 47 can make just about anything look cool. And speaking of cool, right now Hitman 2’s first elusive target, the Undying, is available. You might recognize the Undying as actor Sean Bean, and you’ve got one chance to assassinate him. The mission is also set in Miami, so use your dolphin know-how to help you get him taken care of.