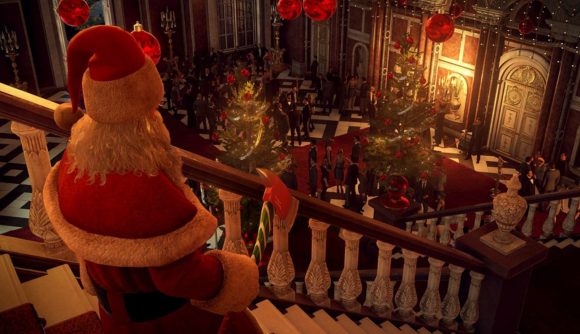 Hitman 2’s player count has been pretty modest. Concurrents peaked at 13,208 – not necessarily terrible, but certainly no special success. But add a little Christmas into the mix and the world goes wild. The game’s special holiday mission is currently free-to-play, and that offer brought a new peak player count of 356,867.

That’s the sixth biggest high in Steam history, right between Grand Theft Auto V and Monster Hunter: World. The player count has since settled down to much more reasonable levels – just over 50,000 as of this post according to Steam Charts – but it seems quite a few people are sticking around for Agent 47’s latest.

Yes, a whole bunch of those players likely logged on to make a few pennies by selling Steam trading cards, but that process happens constantly and most of those games don’t crack the Steam top ten. Something’s pushing IO Interactive’s latest just a bit further, and while it’s likely in part due to the rise of the overall Steam player count, I’d like to think it’s also partly thanks to the encouragement of our Hitman 2 review. (It’s a good game, you should play it.)

The free content is the same Holiday Hoarders mission that appeared in the previous game – a Home Alone-inspired job that asks you to kill a pair of bumbling thieves. It takes place in a redecorated Paris map and offers a host of new challenges that’ll let you unlock a Santa outfit for Agent 47.

If you want to head over to Steam and get into the festivities for yourself, you’ve got plenty of time. The special holiday mission will be available until January 8, well after your real-life holiday celebrations have likely concluded.