Want to know how to complete the Silent Assassin, Suit Only challenge in Hitman 3’s Berlin level? The latest instalment in the Hitman series from IO Interactive, like its predecessors, includes achievements for completing each level with the utmost discretion – you must take down your targets without alerting a single person to your presence. The ‘suit only’ requirement also precludes you from going undercover in a different outfit – you must complete the mission wearing Agent 47’s suit. So, in short: no alarms and no disguises, please.

The third Hitman 3 mission – otherwise known as Apex Predator – takes place in Berlin, in and around Berghain-esque Club Hölle, on the outskirts of the city inside a disused power plant. You’re tasked with eliminating five ICA agents inside the club – and in order to complete the Silent Assassin, Suit Only challenge, you’ll have to be incredibly careful, making frequent use of distractions and stuffing evidence inside lockers and dumpsters.

It may take a couple of attempts, but our walkthrough should make completing this achievement far easier – here’s how to complete the Berlin Silent Assassin, Suit Only achievement in Hitman 3.

As soon as you get visual on the nightclub from the hill, walk down and take cover behind a boulder on the left. A target will wander out from the trees after a short while and you can take them out and kill them when they identify themselves. Hide the body in the bushes. 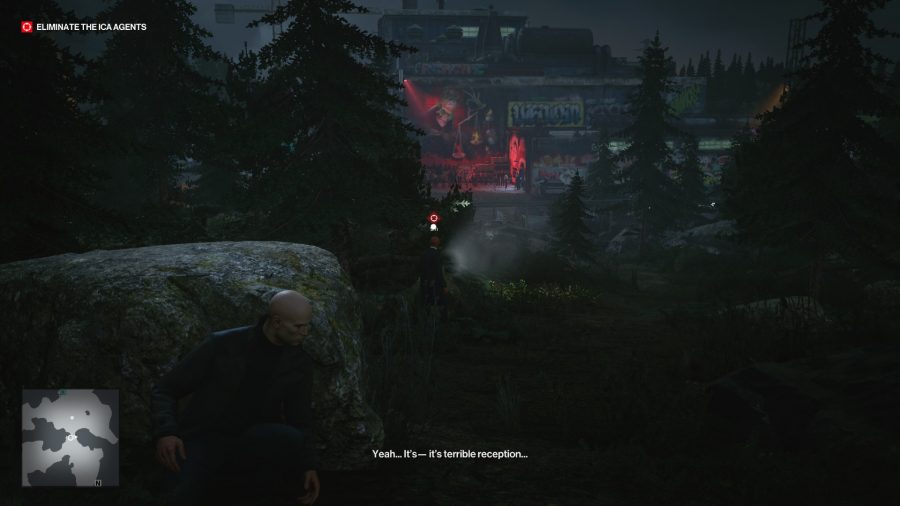 Next, go straight down the hill and through the hole in the fence, heading right through the carpark. There’s a blockade at the end – and to the left, a door that leads into the nightclub via a staff entrance; go through it and straight up the staircase on the right.

As you emerge at the top, be careful about the guard on your left – first, grab the crowbar by the ventilation unit as you’ll need it to open a shortcut later on, then wrap right around the building and vault up onto the roof to avoid the first guard. Go left by some pipes and you can find a spray can, and a ladder up to the next roof. 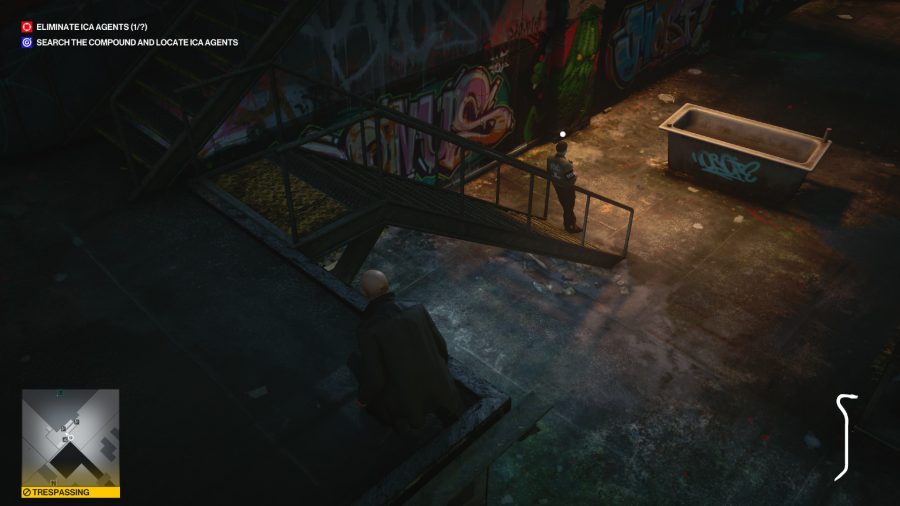 Up one more level, sneak up and take down the guard on the chair by the stairs. Hide his body in the dumpster near the ladder you just climbed up. The next guard along is a target but you’ll need them to radio in and confirm this before you can kill them. Sneak near him and then go left and hide behind the ventilation unit. 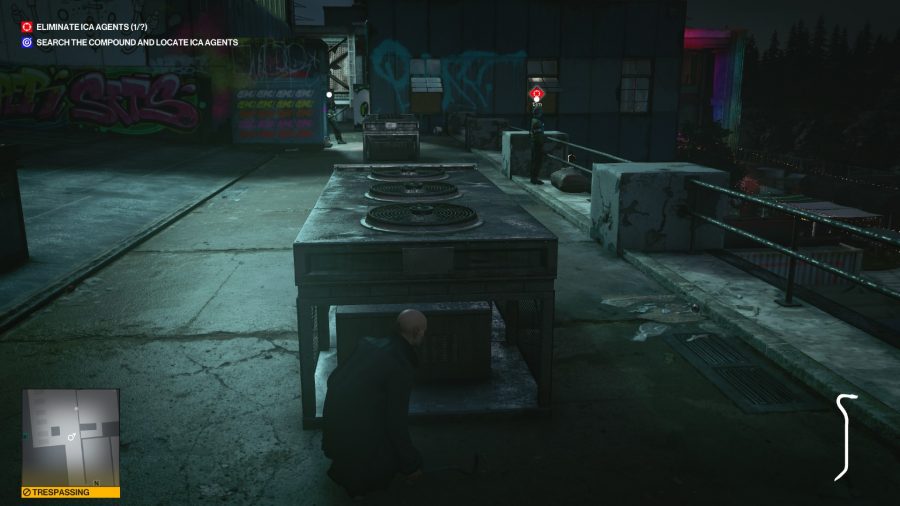 When he confirms he’s a target and heads right towards where you came from, move left and throw a distraction for the guard on the left. You’ll need to take these two down fast – we suggest knocking out the one on the left first and then going for the target you need to kill, as you can use any means to do it so long as it’s silent and you’re not spotted.

Hiding the bodies is easy. There’s one more space in the earlier dumpster and a closet close to where you knocked out the other guard. 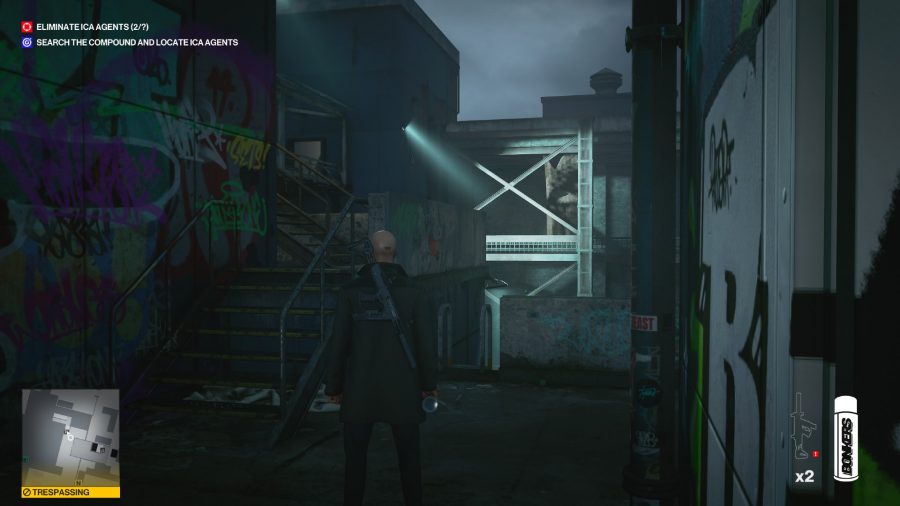 Now head to the end of this section of the roof and go up and left up the metal stairs, cross the bridge that links the buildings, up the stairs, all the way across the roof, and down one flight of stairs.

There are two goons through this door; one of them is a target. Wait for the guard on the right to cross the door and start talking to the target about the sniper, and hide behind the planks just behind them. When the conversation is over, the guard will go to the right, and the dude with the sniper will hang around. 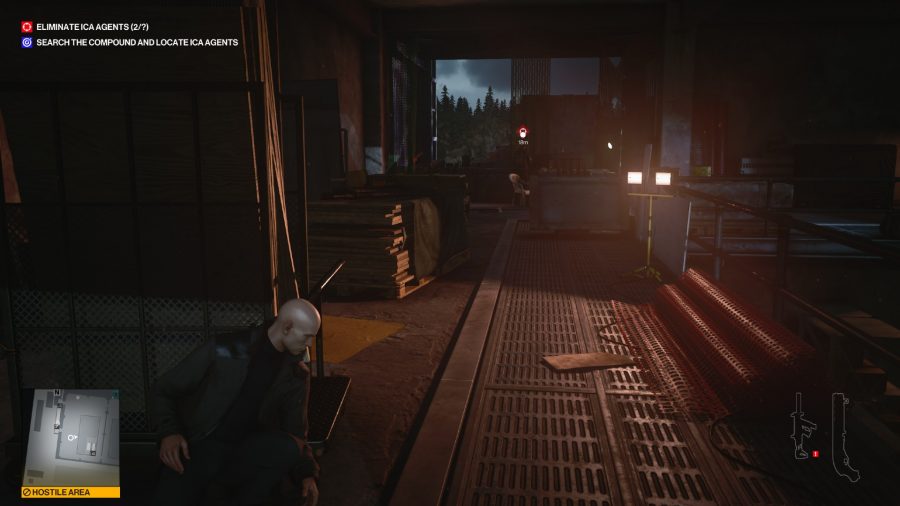 Now you can quickly take out the sniper and then the guard on the right afterwards. Lobbing a spray can or coin as the guard is heading right – and waiting for him to investigate – buys enough time to get the kill and then knock out the guard afterwards.

There’s a closet in the next room over, near where the guard was walking, where you can stash the bodies – but before you do that you’ll need to deal with the guard in that room. You can subdue and tuck this guy into a corner somewhere out of the way – wait until he stops to rest on the blue crate and just choke him out from behind it. 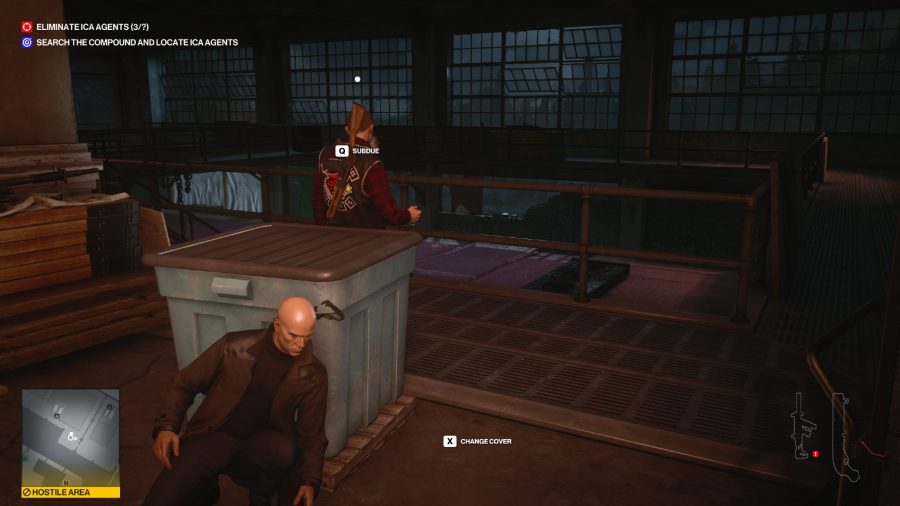 With that done, hide the bodies, and then take an anti-clockwise route around the rafters, before heading down the flight of stairs.

This bit requires speed and precision, but you can basically blunder your way past a lot of guards if you’re confident and keep moving. As you emerge at the bottom of the stairs steer right and look for the next room with a sports car and a camera. Wait for the camera’s gaze to move and pass through the gap and around the sports car. 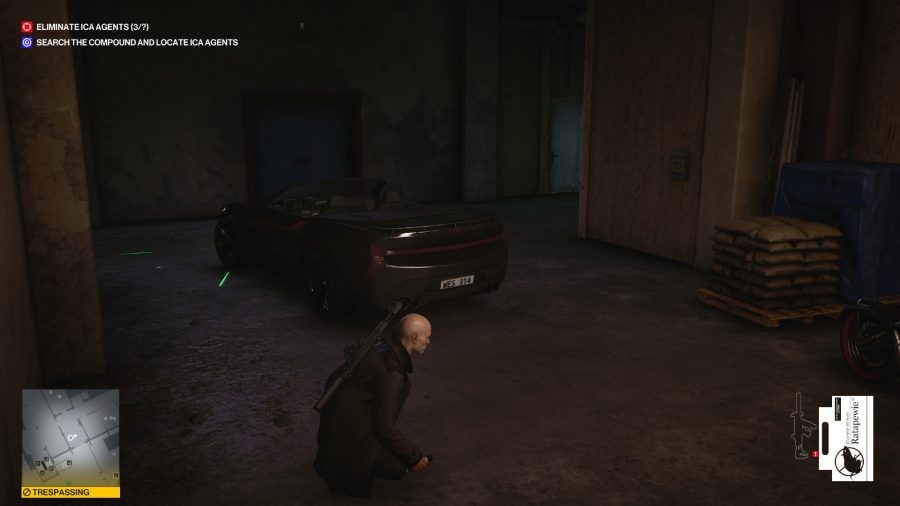 Ahead is a cute little bikers’ hangout – hop through the window when no guards are watching and sneak through behind the bar. Sneak through the door on the left, and hug this side as you approach the garage.

There’s a shelving area you can vault into that provides some good cover. Wait for the next target to wander into the room and reveal themselves, then turn on the radio, and find cover behind a shelf – just make sure the other two bikers in the room can’t see you.

As the target goes to turn the radio off, kill him – and when the coast is clear, stuff his body in the cupboard in the shelving area. It will look like the body is out in the open but we’ve tested it a few times and the bikers don’t appear to spot it on their regular patrol path. 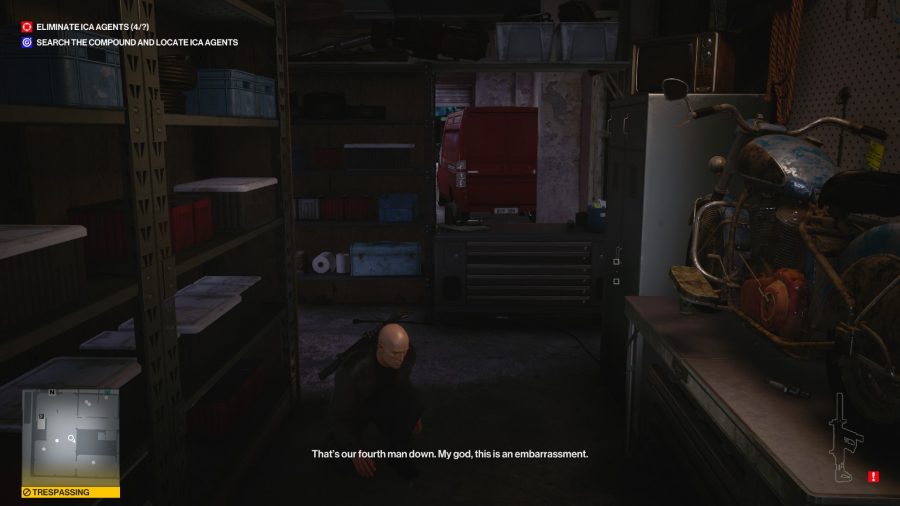 Now, facing the direction where the target originally came from, sneak through to an area with some incinerators and toys in it – creepy. There are two guards to watch out for: the one closest stays put, so wait for the distant one to wander off. Now subdue the first guard and hide the body in the incinerator on the left. Obviously, don’t then turn the incinerator on or you’ll ruin the run.

Be fast and you can weave a path straight past the distant guard and the guard in the shipping area up ahead. As you reach this area, make your way left, back to the staircase that brought you here. Instead of going up, head through the double doors and take a different staircase down and then left, through the shortcut.

Go up the stairs and wrap around the right, through some bushes and a hole in the fence. Keep moving away from the two stationed guards and when you’re far enough away from them, cross the path. Head to the crane, then hide behind some red beams and wait for the final target to reveal themselves. 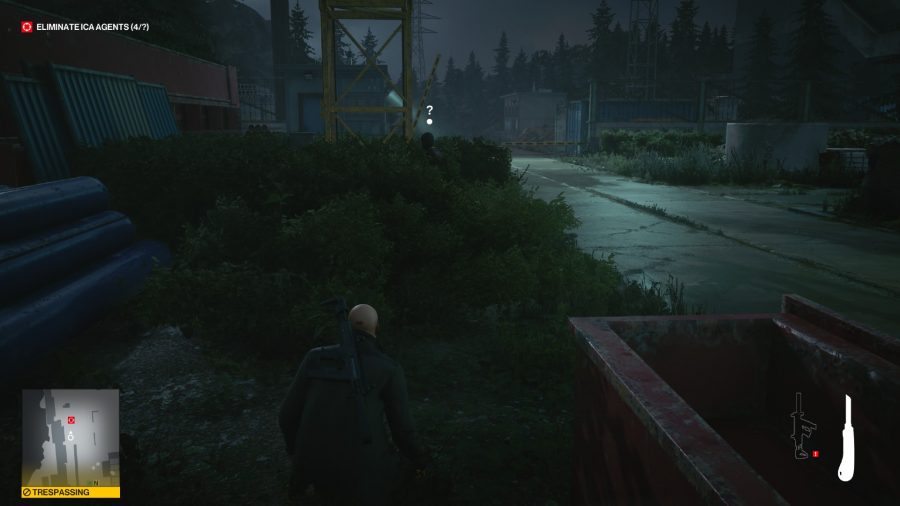 Draw them into the bushes and out of sight by throwing something. Execute them, make sure the body is concealed, and then turn to face the exit from the construction area – the two massive cooling towers should be on your right.

Stick to the foliage for as long as you can and then crouch-run – the guards on the left will see you but you’ll quickly be out of their sight. To skip past the final two guards, go left at the wall where they’re stationed and there’s a low spot you can vault over. Now run to the exit.